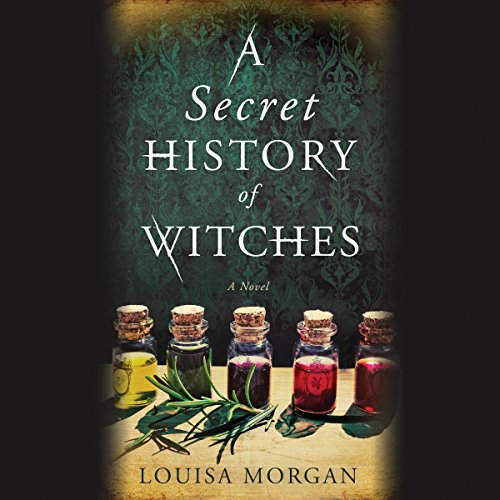 A Secret History of Witches

A sweeping historical saga that traces five generations of fiercely powerful mothers and daughters - witches whose magical inheritance is both a dangerous threat and an extraordinary gift.

Brittany, 1821. After Grand-mere Ursule gives her life to save her family, their magic seems to die with her.

Even so, the Orchires fight to keep the old ways alive, practicing half-remembered spells and arcane rites in hopes of a revival. And when their youngest daughter comes of age, magic flows anew. The lineage continues, though new generations struggle not only to master their power, but also to keep it hidden.

But when World War II looms on the horizon, magic is needed more urgently than ever - not for simple potions or visions, but to change the entire course of history.

Read more
©2017 Louisa Morgan (P)2017 Hachette Audio
Previous page
Next page
Learn more about membership
List Price: $37.16
You Save: $4.64 (12%)
By completing your purchase, you agree to Audible's Conditions Of Use and Amazon's Privacy Notice. Tax where applicable.
Sold and delivered by Audible, an Amazon company

4.4 out of 5 stars
4.4 out of 5
2,319 global ratings
How are ratings calculated?
To calculate the overall star rating and percentage breakdown by star, we don’t use a simple average. Instead, our system considers things like how recent a review is and if the reviewer bought the item on Amazon. It also analyzes reviews to verify trustworthiness.
Top reviews

Amazon Customer
5.0 out of 5 stars An epic story of strong women.
Reviewed in Canada on July 4, 2019
Verified Purchase
I loved this book. the story takes you from 1821 to just past the end of the second world war. It is a tale of mothers and daughters, power, love and hardship. It is rich with historical detail and magic.
Read more
2 people found this helpful
Helpful
Report abuse

Jen
4.0 out of 5 stars interesting descriptive read
Reviewed in Canada on September 23, 2019
Verified Purchase
great book, was an interesting read with vivid description of the various locations making me want to visit them all, got attached to the characters and liked that it shows the generations of the same family line to continue attachment to the characters
Read more
One person found this helpful
Helpful
Report abuse

Thor
5.0 out of 5 stars Entertaining through generations
Reviewed in Canada on December 23, 2020
Verified Purchase
I enjoyed a book where women were strong. different personalities, strengths, shared witchery. Characters were well-developed. It captured the essence of women's experiences of being feared for her knowledge and talents.
Read more
Helpful
Report abuse

Diane A Sidebottom
5.0 out of 5 stars The journey of knowledge
Reviewed in Canada on January 30, 2021
Verified Purchase
Wonderful book showing how the craft has moved through time. The challenges of women and connection. How we became feared and then evil. How we lost the fluidity in teaching and how we are finding new footing sharing with others to reseed the much needed wisdom of the community of Witch.
Highly recommend
Read more
One person found this helpful
Helpful
Report abuse

Amazon Customer
5.0 out of 5 stars Well written
Reviewed in Canada on December 27, 2019
Verified Purchase
I Loved This Book! I highly recommend it for anyone interested in novels of witches. A saga of one family and their story over the generations. I have already bought another novel by the same author.
Read more
Helpful
Report abuse

Tania Briffa
5.0 out of 5 stars Good Book
Reviewed in Canada on July 28, 2022
Verified Purchase
I liked this book. It is an easy read with good characters. Well done!
Read more
Helpful
Report abuse

L Dean
5.0 out of 5 stars Engaging
Reviewed in Canada on September 28, 2020
Verified Purchase
I have found all of Louisa Morgan’s books well written and very engaging. Her characters are well fleshed out, and her narratives are descriptive and flowing. She is able to paint a picture with words!
Read more
Helpful
Report abuse
See all reviews

wighthelen
1.0 out of 5 stars Beyond Even Fictional Belief!
Reviewed in the United Kingdom on May 30, 2018
Verified Purchase
I quite enjoyed this book, which is a bit of light reading nonsense , until the section on Veronique.
The author, American I presume by the terrible spellings, postulates that the late Queen Mother was a witch, based on the evidence that one of her family was burned as a witch for what was clearly political reasons.
It is well known that both the late Queen Mother and Prince Charles are Druids. Whatever!
It really, really stretches the bounds of fiction to suggest, even if she were a sister of the craft, that the Queen Mother would share highly confidential info on D Day in this way, just plain ridiculous!
There was a New Forest Coven, which according to Doreen Valente made spells to repelled the German invaders, and Aliester Crowley did engage in secret war work.
Of course the female protagonists right through the novel are stunningly beautiful, sweet natured, clever, and succeed at all they touch, but that's why we all escape into novels
I had hoped that Veronique would work with the Forest coven, disappointing ending, with a cliffhanger no doubt for the next book.
Read more
28 people found this helpful
Report abuse

elliemay
2.0 out of 5 stars couldnt read the last portion about Veronica
Reviewed in the United Kingdom on September 25, 2018
Verified Purchase
I really quite enjoyed this book about witches and their geneology, until I reached the Book of Veronica. This book started off all right but a bit sudo upper classy and definately how the other half lived, which was fine. Veronica a bit too good to be true, but readable. THEN when it came to Veronica meeting Queen Elizabeth (the queen mother) at the start of WWII and saying that Queen Elizabeth was a witch, I stopped reading this book. I thought it was going too far and I was disasppointed but the the author is American and I suppose she thought she could get away with it. Sorry! but if it had been a British author, writing the President of the USA was a warlock, I don't think the Americans would be best please.
Read more
20 people found this helpful
Report abuse

Miss T
4.0 out of 5 stars Following the Orchiere family history
Reviewed in the United Kingdom on March 27, 2020
Verified Purchase
A lengthy novel that follows the lives of the Orchiere family, a family of Romani gypsies who flee France in fear of being burnt as witches.

One life follows another each with its own deep secrets, dreams and aspirations. Each faces up to a personal dilemma, some with more success than others.

Starting in 1821 when the family flee from Brittany and following the daughters as they mature and grow into their powers. Not all will make the right choice but each will pass on the spark that brings the scrying stone to life to the next. They will face the choices they made and live hard lives often fearful of discovery.

I really enjoyed the book but I felt it lacked a vital something.. it needed just a little spark somewhere to lift it into 5*'s. The end felt a little flat.. which was a shame because it's just so close to the next level.
Read more
One person found this helpful
Report abuse

Aisling McCarthy
5.0 out of 5 stars Really interesting novel
Reviewed in the United Kingdom on May 28, 2019
Verified Purchase
What I really enjoyed about this book was the slightly unconventional timeline of the story. It follows the same family of witches from 19th century Brittany, to WWII era England, tracking the adversity they faced in preserving their craft and traditions. Thoroughly engaging from start to finish, with well developed, strong female characters that you can't help but be moved by. If you enjoyed 'A Discovery of Witches' by Celia Harkness or Paula Brackston's 'The Winter Witch' then you'll love this. Don't expect wildly dramatic magic, this is a more subtle sort, it is more about the human story and the relationships between the women of the Orchiere line.
Read more
2 people found this helpful
Report abuse

Debbie
3.0 out of 5 stars I think I am disappointed
Reviewed in the United Kingdom on January 18, 2022
Verified Purchase
Having devoured the great witch of Brittany I found this book drab in comparison. Out of all the women in this book only Morwena and her daughter Veronica shone through. The rest were grabby witches who had no thought to consequences on actions they undertook.
Read more
Report abuse
See all reviews