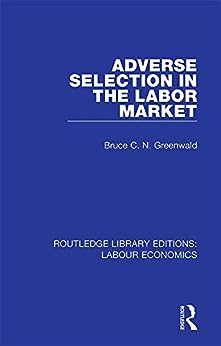 First published in 1979. This thesis describes the theoretical impact on labour markets of a process of adverse selection similar to that described in outline by George Arthur Akerlof. It concerns the information conveyed to potential employers by the fact that any new worker, except for one just entering the labour force, has either left or is prepared to leave his latest Job. If an employer is able to identify his good workers more accurately than the market at large and is generally successful in retaining them, then the group of workers leaving him will contain a disproportionately small number of good ones. For similar reasons this pool should also contain an unusually large number of bad workers who have been either flied or induced to quit. Thus, workers who change jobs should on average be less able ones. Since the market failures that result have potentially significant consequences in the labour market, this study is devoted to examining their influence on the structure of wages and job tenure, and on the operation and efficiency of labour markets. This title will be of great interest to students of economics and business studies.