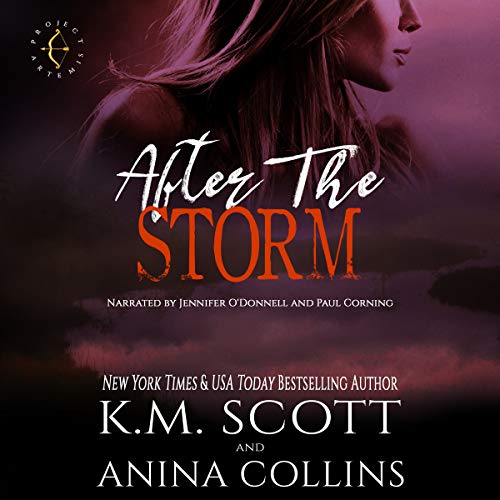 Kate Sheridan thought she had a handle on life. She had a good job as a legal assistant, great friends, and a life in New Orleans she enjoyed. Until that life came apart at the seams. Now her boss is dead, murdered along with one of his clients, and Kate is on the run from the police who think she's a prime suspect.

And things are going to get worse before they get better because what her boss stumbled upon involves far more than just some personal injury case in the Big Easy.

Roman Gregory is proud of his work with Project Artemis. After spending years as an Army Ranger, he's committed to helping women in danger. He's one of the members Nick and Persephone can always rely on to solve a case and get the client's life back to normal because he never lets anyone get in his way of handling a problem. And he never lets anyone get close.

Then he's given the assignment in New Orleans and everything changes. But will protecting Kate be something he can do without letting her in?

4.8 out of 5 stars
4.8 out of 5
9 global ratings
How are ratings calculated?
To calculate the overall star rating and percentage breakdown by star, we don’t use a simple average. Instead, our system considers things like how recent a review is and if the reviewer bought the item on Amazon. It also analyzes reviews to verify trustworthiness.

Donna Ferriola
5.0 out of 5 stars After the Storm
Reviewed in the United States 🇺🇸 on June 21, 2018
Verified Purchase
This is the second book in this action packed romantic trilogy with one of the men that works for Project Artemis, Roman given the assignment to save a woman named Kate that works as a legal assistant to personnel injury lawyer, Jonas who was just murdered in New Orleans. Someone thinks she knows important facts about the case Jonas was working on. His client was also murdered at the same time. Jonas warned her to not to trust the police if something happened to him. Once Roman found her the problem was convincing her to trust him and to tell him everything she knew about what Jonas was working on. It was amazing how they found the proof to take down the guilty parties before anyone else was murdered and sent it to Xavier at Project Artemis to decipher. They had to survive their kidnapping and Roman saved them but Kate did get shot. Project Artemis team retrieved them and saved Kate's life. Their love story was amazing and Roman was never leaving Kate's side again since he finally found true love. Kate was in love with Roman as well and I we he would always be there for her. Kate and Roman got their happy ending and took down a corrupt politician with their hard investigative work. Roman also got to keep his job with Project Artemis and continue the good work they were doing just in a different capacity. I cannot wait to read the final installment in this amazing action packed romantic trilogy.
Read more
3 people found this helpful
Report abuse

creed
4.0 out of 5 stars Stupid heroine
Reviewed in the United States 🇺🇸 on January 14, 2021
Verified Purchase
I'm not a fan of heroines who are weak and place themselves in danger with their selfish behavior. I'm at 58% and for the most part I just want Roman to walk away. I can't believe he has an interest in Kate. I hope she grows a brain before the end of the book.
Read more
Report abuse

Katina
5.0 out of 5 stars Roman & Kate
Reviewed in the United States 🇺🇸 on November 7, 2018
Verified Purchase
I loved the story of Kate and Roman. The story jumped right into the action as soon as it started. And Roman was a ALPHA!!!!!! I pove that he finally started thinking and believing in love and letting Kate in. He could have another book with what all happened in the military and his future with Kate.
Read more
2 people found this helpful
Report abuse
See all reviews