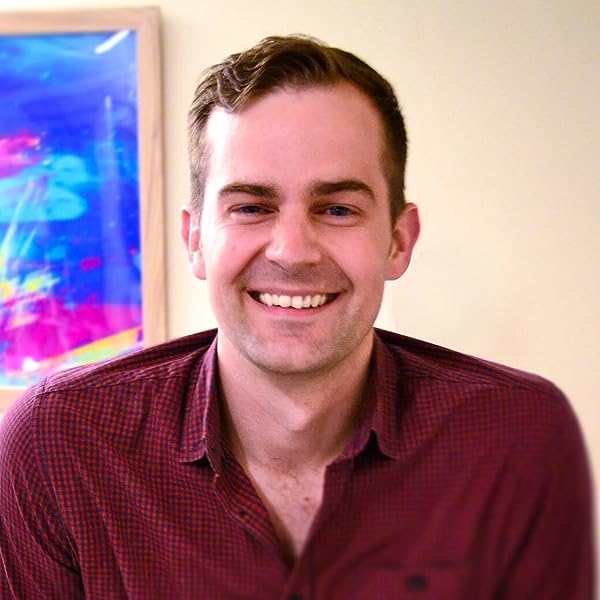 Alone: A Story of Friendship in the Darkness of Space (A Children's Picture Book) Paperback – Aug. 8 2019

by Scott Stuart (Author)
4.6 out of 5 stars 97 ratings
See all formats and editions
Sorry, there was a problem loading this page. Try again.

We all feel different sometimes, and Earth, slowly spinning in the darkness of space, feels so very different from all the other planets.

Can Earth find friendship in the loneliest of places?

This lovingly illustrated children's book by Scott Stuart reminds us that even when we feel completely alone, friendship is just a moment (or a meteor) away.

Earth opened her eyes
and looked all around.
She looked for a friend…
but no friend could be found.

Click the BUY button and get your copy of this beautiful and empowering story now!

AN INTERVIEW WITH THE AUTHOR

Q - What inspired you to write this book?

When I was young, we moved house a lot, and every time we arrived in a new place, I had to go through the process of making new friends. I vividly remember moving to Melbourne, knowing nobody, and in this large city, surrounded by millions of people, I felt lonelier than I had ever felt before. I think a lot of kids, as they enter new stages of their lives, can really relate to this feeling of loneliness, of being surrounded by people but afraid that they won’t make new friends, of feeling completely alone in the world.

As I explored that theme for a new children’s book, I thought “what could be lonelier than the darkness of space?” That led me to think about how the Earth would feel if it were to wake up, surrounded by darkness, wanting to make friends.

Q - What do kids learn in this book?

To cover the scientific bases first - I’ve been amazed at how quickly kids have learned the little facts that I brought into the story about all the planets. Like Uranus being blue and 4 times the size of Earth - when my son said that to me I was completely blown away by everything he remembered about the story.

Everything in the book is based on scientific theory - some of it is debated of course, like how the moon came to be, and the age of the sun - but everything is based on our knowledge of the universe.

The other thing, and the most important thing, that kids are learning, is that feeling alone in a new environment is something that everyone experiences. They learn that it’s ok to feel sad when they’re struggling to make friends. And they also learn that friendship is always only a moment (or a meteor) away.

Q - What’s the feedback that has been the most surprising?

I’ve been constantly surprised by, despite this being a picture book written for young children, how much this concept of feeling alone has resonated with an older audience. I know I had experienced the feeling, especially when in a new city, but so many people have reached out and told me they have felt the same.

Q - Do kids love this book?

I think that, when it comes to books about planets and space, it can be hard to really engage kids in the facts and the science. I’ve taken a completely different approach. I’ve built a really heartwarming story about the Earth and her emotions. I’ve been unafraid to dive into those emotions to create something that kids can really relate to on the deepest level, and I’ve been absolutely overjoyed to see the enjoyment that kids are getting out of this picture book.

I hope you love the book, and I always love to hear your thoughts.

Scott is a best-selling children’s book author who is committed to creating content that empowers young kids. His have appeared on numerous best-seller lists, as well as receiving nominations for Children’s Book of the Year & Picture Book of the Year (My Shadow is Pink).

His empowering messages have been seen over 100 million times on Social Media, and he is a leading voice on fully accepting & empowering our children, exactly as they are. He regularly appear on podcasts and in media, speaking about parenting, discovering your authentic self and learning to accept yourself and your children.

4.6 out of 5 stars
4.6 out of 5
97 global ratings
How are ratings calculated?
To calculate the overall star rating and percentage breakdown by star, we don’t use a simple average. Instead, our system considers things like how recent a review is and if the reviewer bought the item on Amazon. It also analyzes reviews to verify trustworthiness.
Top reviews

Bri-anna
4.0 out of 5 stars Super Cute Children’s Book
Reviewed in Canada on September 20, 2019
Verified Purchase
This cute little children’s read focusses on the earth trying to find a new friend. This book personifies earth while she tries to make friends with the son, and the other planets, and tries to find out why other people don’t love her when she loves herself. The book has a wonderful theme about making friends in dark times yet is also fun and not as intense as the theme sounds. I would highly recommend this little rhyming books, it is short and sweet, and it is absolutely wonderful.
Read more
Helpful
Report abuse

Sandra
4.0 out of 5 stars A colourful, sweet solar system kid's story!
Reviewed in Canada on September 1, 2020
Verified Purchase
A perfect story for little minds who are interested in our Solar System. Our four year old grandson is absolutely addicted to all the planets in our Universe and I can't wait to read this delightful book to him. I am sure he will love it.
Read more
Helpful
Report abuse

Beth Weatherbee
5.0 out of 5 stars Moonstruck!
Reviewed in Canada on September 27, 2019
Verified Purchase
Alone is a sweet tale. It is lovely for children with rhythmic lyrics that introduce our solar system to young earthlings.
Read more
Helpful
Report abuse

Lanai
5.0 out of 5 stars Adorable book about planet's differences
Reviewed in Canada on September 19, 2019
I got this book thinking it could be cute for my kids after we'd recently moved. The pictures and rhyme are really fun and my 5 and 6 year olds enjoyed it. It named all the planets and also about liking things about yourself even when others don't.
Read more
Helpful
Report abuse
See all reviews

Jade Hewlett
5.0 out of 5 stars Beautiful story of friendship and to learn a bit about space
Reviewed in the United Kingdom on February 9, 2020
Verified Purchase
Alone is a beautiful story about Earth who is looking for a friend in space but can find no one like himself.

Alone is a book that really surprised me, it is a great story and has so much for the children to learn within. The children liked seeing Earth as he looked so kind and like he needed a friend and I think the way the other planets are introduced in this book are very clever. By having each planet named and describing its differences to Earth it meant that the children were learning about space without realising it as it still felt like just a story.

I loved how we got to see each of the planets as their own characters based on what's distinguishes them from the other planets but what I loved most was seeing Earth being happy with himself just as he is and recognising his qualities and differences, something we should encourage in all children, a positive look at themselves!

The illustrations are gorgeous with each page being a pretty sky and one planet. It's great how we got to see the planets have emotions and feelings as it shows the children how we feel when someone doesn't want to be their friend and encourages empathy in children. They wanted Earth to find someone as much as earth did!

This is a gorgeous book that we all enjoyed. Perfect to learn about planets and space in a fun way with friendship and emotions included giving more depth to the story, a brilliant read!
Read more
Report abuse

Kindle Customer
5.0 out of 5 stars A truly lovely book
Reviewed in the United Kingdom on October 21, 2019
Verified Purchase
Just finished reading this to my kids for their bedtime story. We've read hundreds of books and this one is brilliant, it has all the elements of feelings young kids generally have, growing up. Hope, sadness, worry, loneliness, rejection and of course friendship. The illustrations are beautiful and it's a book I will definitely read again.
Read more
Report abuse

emily2000
5.0 out of 5 stars Lovely book!!
Reviewed in the United Kingdom on March 19, 2021
Verified Purchase
LOVE THIS BOOK!! I love anything space related, and knew I had to buy this to read to my class, who loved it too!
Read more
Report abuse

KM
5.0 out of 5 stars Great for little astronomers
Reviewed in the United Kingdom on September 24, 2019
Verified Purchase
Nice little story. My planet crazy 4 year old loves it.
Read more
Report abuse
See all reviews
Back to top
Get to Know Us
Make Money with Us
Amazon Payment Products
Let Us Help You
EnglishChoose a language for shopping. CanadaChoose a country/region for shopping.
© 1996-2022, Amazon.com, Inc. or its affiliates