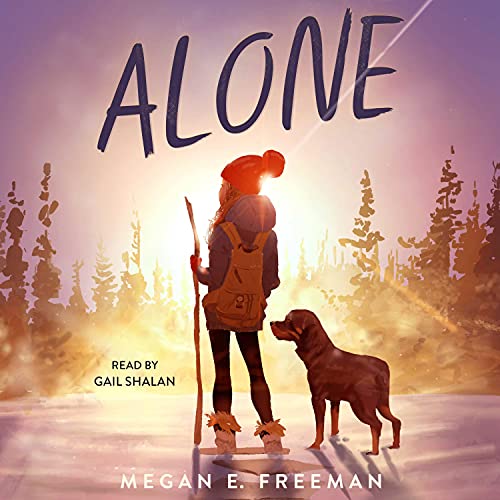 Perfect for fans of Hatchet and the I Survived series, this harrowing middle-grade debut novel-in-verse from a Pushcart Prize-nominated poet tells the story of a young girl who wakes up one day to find herself utterly alone in her small Colorado town.

When 12-year-old Maddie hatches a scheme for a secret sleepover with her two best friends, she ends up waking up to a nightmare. She’s alone - left behind in a town that has been mysteriously evacuated and abandoned.

With no one to rely on, no power, and no working phone lines or internet access, Maddie slowly learns to survive on her own. Her only companions are a Rottweiler named George and all the books she can read. After a rough start, Maddie learns to trust her own ingenuity and invents clever ways to survive in a place that has been deserted and forgotten.

As months pass, she escapes natural disasters, looters, and wild animals. But Maddie’s most formidable enemy is the crushing loneliness she faces every day. Can Maddie’s stubborn will to survive carry her through the most frightening experience of her life?

Get 3 months of Audible for only $5.95/mo!
You get 3 credits and unlimited access to podcasts, originals and more.
Limited time offer! Get started
Learn more about membership
List Price: $21.30
You Save: $2.66 (12%)
By completing your purchase, you agree to Audible's Conditions Of Use and Amazon's Privacy Notice. Tax where applicable.
Sold and delivered by Audible, an Amazon company
Share

4.7 out of 5 stars
4.7 out of 5
538 global ratings
How are ratings calculated?
To calculate the overall star rating and percentage breakdown by star, we don’t use a simple average. Instead, our system considers things like how recent a review is and if the reviewer bought the item on Amazon. It also analyzes reviews to verify trustworthiness.

Greta Garbo
5.0 out of 5 stars Review
Reviewed in Canada 🇨🇦 on November 6, 2022
Verified Purchase
An enjoyable read about a young girl who is faced with having to care for herself when she misses a mass evacuation.
Read more
Helpful
Report abuse

Amazon Customer
5.0 out of 5 stars I agree with Tracy
Reviewed in Canada 🇨🇦 on May 3, 2021
yea this book is recommended to people of all ages and genders. hard too put down… just flipping pages >_<
Read more
2 people found this helpful
Helpful
Report abuse

Reader
5.0 out of 5 stars Page turner
Reviewed in Canada 🇨🇦 on May 2, 2021
Hard to put down this beautifully written in verse novel
Read more
Helpful
Report abuse
See all reviews

Alina Mihai
5.0 out of 5 stars It's writtwn in sparse verse, and easy to read.
Reviewed in Germany 🇩🇪 on October 11, 2022
Verified Purchase
Read more

5.0 out of 5 stars It's writtwn in sparse verse, and easy to read.
Reviewed in Germany 🇩🇪 on October 11, 2022
Images in this review

Amazomcustomer
5.0 out of 5 stars great pre-teen to teenager book
Reviewed in the United States 🇺🇸 on February 21, 2022
Verified Purchase
Alone by Megan Freeman is a great book about a tired, rebellious teen that has to switch back and forth between two divorced parents looking for a break. A break that turns out to be a long 3 years alone. I love all the references used in the book to other stories, authors and poetry. I love how the girl uses the library as a constant reference place and continues to read throughout everything going on. I think that writing could be more structured in complete sentences, rather than the choppy thought that are used. The author does a great use of details and figurative language as she writes that allows the reader to easily visualize and story and feel like you are there along with the character. Megan Freeman does a great job at building anxiety through the character and allowing the reader to feel as the character feels in the text. I would rate this book overall a 5 out of 5 stars based on the uniqueness and quality of how the story is told. It seems to be written for children as young as 10 and closer to a 5th grade reading level, but can easily be enjoyed by adults as well!
Read more
4 people found this helpful
Report abuse

Sandra K. Stiles
5.0 out of 5 stars On the Edge of Your Seat
Reviewed in the United States 🇺🇸 on June 25, 2021
Verified Purchase
Maddie is a typical teen living in Colorado. Maddie splits her time between her mom and step-dad’s house and her dad and step-mom’s house. She and two of her friends hatch a plan to spend a night at Maddie’s grandparents apartment alone. Maddie tells her mom she is staying with her dad and tells her dad she is staying with her mom to babysit. She goes to her grandma’s apartment and waits for her two friends to arrive. Unfortunately, their parents call her mom and are told she is at her dad’s so they can’t go anywhere. Then the unimaginable happens. Maddie hears sounds of panic outside of her grandma’s apartment. People are being rounded up. She hears the neighbor tell the person in charge that the owners are out of state. Maddy wakes the next morning to learn that everyone in her town has been evacuated due to an “imminent threat”. This begins Maddie’s journey to survive. She doesn’t know what the threat is. As she goes about town she finds a barrel with cell phones in it. She dials her mom’s number and hears a phone ring in one of the barrels, she tries her dad’s phone and her friends’ phones only to realize every one of them were left behind. This is a story of survival. It starts with Maddie talking to one of her step-brothers about the book “Island of the Blue Dolphins”. There are definite similarities between the book and Maddie’s new reality. I loved that this was told in verse which made it a very quick read. The emotional aspect as you go day by day and year by year on this ride with Maddie makes you wonder what you would do if you were left behind. Can’t wait to put this on my school shelves.
Read more
4 people found this helpful
Report abuse

hungry reader
5.0 out of 5 stars Even More Important Than Survival Is...
Reviewed in the United States 🇺🇸 on February 10, 2021
Verified Purchase
Almost-thirteen-year-old Maddie is “a ghost in a twenty-first century ghost town,” after a mysterious event wipes out the entire population Millerville, Colorado—overnight—in Megan E. Freeman’s ALONE.

What happened? How and why was Maddie spared? Will she survive? Will she find her family? Will her family find her?

Maddie’s experience really is a kid’s worst nightmare. Narrating through striking, skeletal prose, she discloses details about herself, her family, and her friend, Emma, a fashionista—who never told Maddie about her parents’ pending divorce.

“I am on my own…childhood is over.” Matter-of-factly, Maddie doesn’t complain. A resourceful and independent bookworm, Maddie “gets to work,” moving to her dad’s house, stocking up for winter, growing a garden, outwitting hungry coyotes and looters, and overcoming other “impossible obstacles."

It doesn’t take long for Maddie to realize survival is more than food, water, and shelter. She craves the irreplaceable comfort of people. Not even Maddie’s furry companion George can replace the sound of the human voice. There is none like it “in all the world,” Scott O’Dell’s epigraph warns the reader. Maddie wants her mom. She’d even settle to be back in math, surrounded by people she “didn’t even realize [she] loved.” A flushing toilet lends her a moment of feeling human again.

As fall moves into winter, spring, summer, and back into fall, Maddie reads, sleeps, and forges her way through the days. The reader imagines her sitting by the fire, flashlight in hand, journaling in what becomes the book.

Between the bindings are words about words. Even the spaces speak. Heaven, Exploration, Peril, Desolation, Acceptance, Reconciliation: ALONE is broken into parts by single, stark terms and their definitions. A postcard, text messages, voicemail, a book report, and a letter to God add depth and dimension to structure and plot. Like an ice crystal in the Colorado winter, the novel catches light, giving color and hope to what it means to be human.

Freeman artfully adds hollow beauty to the survival story. Maddie’s whispers trail from the last pages: “There is only this / the touch of their hands / skin on warm skin / to be held / to be seen / to be heard / to be known / these are the nutrients…”

Jenene R. Meyer
5.0 out of 5 stars Wow!
Reviewed in the United States 🇺🇸 on January 28, 2021
Verified Purchase
Oh. My. Gosh.
I was holding my breath multiple times while reading this book and realized I needed to breathe!
I am normally not a fan of dystopian books or novels. With this one being written in verse I feel like it helped hold my interest and moved along quickly.
Maddie is 12 years old. Her parents are divorced and her and a couple friends make a plan to sleepover at her grandparents summer apartment...without the parents knowing. The plan falls through and Maddie ends up being at the apartment overnight by herself. She wakes up to text messages, alerts and voicemails. Her town has completely evacuated. Except for her.
I won’t give away the end but I felt it was a little rushed and left me with some questions.
Read to find out how she survives her time alone!
Well done as a debut novel.
Read more
4 people found this helpful
Report abuse
See all reviews