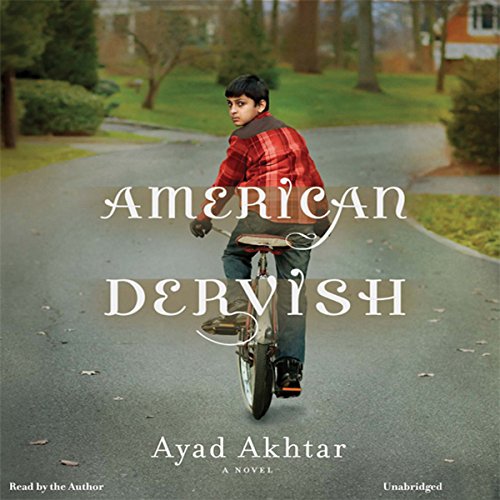 Ayad Akhtar (Author, Narrator), Hachette Audio (Publisher)
4.4 out of 5 stars 467 ratings
See all formats and editions
Sorry, there was a problem loading this page. Try again.

Audie Award Nominee, Narration by the Author or Authors, 2013

Hayat Shah was captivated by Mina long before he met her: his mother's beautiful, brilliant, and soulfully devout friend is a family legend. When he learns that Mina is leaving Pakistan to live with the Shahs in America, Hayat is thrilled.

Hayat's father is less enthusiastic. He left the fundamentalist world behind with reason. What no one expects is that when Mina shows Hayat the beauty and power of the Quran, it will utterly transform the boy.

Mina's real magic may be that the Shah household, always contentious and sad, becomes a happy one. But when Mina finds her own path to happiness, the ember of jealousy in Hayat's heart is enflamed by the community's anti-Semitism-and he acts with catastrophic consequences for those he loves most.

Read more
©2011 Ayad Akhtar (P)2011 Hachette Audio
Previous page
Next page
Learn more about membership
List Price: $22.61
You Save: $2.83 (13%)
By completing your purchase, you agree to Audible's Conditions Of Use and Amazon's Privacy Notice. Tax where applicable.
Sold and delivered by Audible, an Amazon company

4.4 out of 5 stars
4.4 out of 5
467 global ratings
How are ratings calculated?
To calculate the overall star rating and percentage breakdown by star, we don’t use a simple average. Instead, our system considers things like how recent a review is and if the reviewer bought the item on Amazon. It also analyzes reviews to verify trustworthiness.
Top reviews

Boudu
4.0 out of 5 stars The Oneness of All
Reviewed in the United Kingdom on July 17, 2013
Verified Purchase
I originally came to Akhtar's novel because of similarities I read in one review to LP Hartley's `The Go-Between' & certainly Hayat, the ten year old lead protagonist, does commit an act which has far-reaching consequences in the way that he does not intend. `The Go-Between' was about class/social barriers in 1900 England. `American Dervish' is about perhaps an even more incendiary issue, that of religion & cross-cultural relationships, in early 1980s middle America.

The very personal story in the novel can almost be seen as representative, as pointed out in earlier perceptive reviews, of the complex, long-standing relationship between Islam & Judaism, connected by history and sharing so much in common (prophets), but soured by recent grievances over territorial issues.

With regards to the novel itself, it is a page-turner, full of deft characterisation, the dialogue capturing a range of voices, from those of a vibrant, soulful woman, Mina, to those of children, the curious Hayat & the more innocent Imran, as well as the unctuous members of the local Muslim community in Milwaukee. The book itself is more cinematic in tone than literary, and would probably lend itself to adaptation quite easily though this is not to devalue its emotional power and the complexity of Mina's very personal interpretation of Islam.

The novel is filled with several dramatic confrontations, indicative of Ayad Ahktar's background as an actor/playwright, and I felt it did occasionally lurch towards melodrama. Having read a piece on Ahktar & his work, his acclaimed play `Disgraced', he is conscious of his audience & I found `American Dervish' poignant at times, some scenes emotionally intense(the parting between the Shahs & Mina, the scene in the hospital), if a little manipulative. But they worked because they pulled my heartstrings.

The novel itself is in the tradition of a Bildungsroman, the coming of age story of ten year old Hayat, as he comes to terms with Islam and a multiple identity as a Pakistani-American, the secular & the religious. Through Hayat, the first person narrator, we explore the transforming quality of religion, but also its more negative side, about how it can indoctrinate an impressionable young mind. `Allah's light' eventually guides Hayat to a very different revelation, an insight into the human heart & a journey - foreshadowed by his own `night journey'/dream in hospital - from a willing, often literal acceptance of things (hellfire, anti-semitism) to a new scepticism.

`American Dervish' is very much about the push-pull dynamic & tension characters experience as a consequence of a dual identity and the hope embodied by Hayat & his inter-faith relationship at the end of the novel is counterbalanced by the tragedy that ultimately leads to the physical and mental disintegration of his beloved Aunt Mina in the novel. The charismatic Mina, who has sought sanctuary in the US with her son after getting divorced in Pakistan, transforms an unhappy household, bringing light & love, and falls in love with Nathan, a Jewish colleague of Hayat's father. Already febrile, this mix is intensified by Hayat's infatuation for his Aunt and his jealousy of her new found happiness. He is a young boy conscious of feelings that he does not understand.

The novel casts a critical eye over Islam in America, of the religious intolerance and hypocrisies practiced by the local Muslim community in Milwaukee, such as the dark satire on Imam Souhef's rather bizarre sermon (showing how even the most tenuous of links can be used as a vehicle to peddle hatred, an interesting philosophical premise simply winds up as pandering to the lowest common denominator, anti-Semitism), the shared complicities, even by wives, but the book should not be seen as a diatribe against Islam. Rather, I see Akhtar's portrayal of Hayat's beloved Aunt as representing Islam in a positive light & that under fairer, less patriarchal circumstances, such a woman possessed the intelligence to become a maulavi herself (imam). The independent Mina practices `ijtihad', a personal interpretation of Islam, humane & compassionate. Dragged down by fate & circumstance, she ultimately becomes the eponymous 'American Dervish', whose suffering and pain brings her closer to Allah - and where it should be perhaps remembered that `sufism' (mysticism) emerged as a reaction to the more austere teaching of Islam.

I did like the characterisation of Hayat's parents, Naveed & Muneer, their volatile relationship, and Muneer's bitterness towards her husband's drinking & womanising, though she ultimately realises that their marriage is one of equals and a proper marriage in name rather than the virtual act of self-sacrifice made by Mina. Though their marriage, too, is a comment that same-faith marriages contain the same inherent problems as any marriage: the need to communicate; and ironically, Mina & Nathan are perhaps more emotionally compatible than Hayat's parents despite their cultural differences.

I did like the easy-going, irreligious Naveed though, perhaps the other extreme of Muslim experience in America (he is aloof from the community, preferring a Western lifestyle), and, ironically, his rare acts of intolerance are usually directed towards Islam/fellow Muslims and one in particular, an ironic reversal of the Rushdie affair.

Browsing other reviews, on the both UK & US amazon pages, I did feel some of the criticism about the authenticity of the characters and situations perhaps had a ring of truth. The ill-fated lovers from warring faiths, Hayat's later relationship with Rachel are perhaps more wish-fulfillments & the well-intentioned hopes of an author trying to posit a solution - the need for more tolerance & understanding of people of different backgrounds through the personal. Upon reflection, I really do wonder how likely, or how possible this is in a world where people do categorise/compartmentalise one another and frequently lead separate lives side by side.
Read more
2 people found this helpful
Report abuse

Amazon Customer
5.0 out of 5 stars american dervish
Reviewed in the United Kingdom on April 23, 2012
Verified Purchase
nice book,makes you smile and cry in the same time, it's quite sad story but force you to think deeply about it and make your own opinion,sometimes it's hard to decide on which side you are, or what way is better one. I couldn't wait to finish work so I could read it. It's a real page turner and I would recomend it to everyone who likes to read books which make them think about it even long after you finished reading it:-)
Read more
2 people found this helpful
Report abuse

Charlotte
5.0 out of 5 stars I really loved this commercial literary novel
Reviewed in the United Kingdom on February 19, 2015
Verified Purchase
I don't think this sold very well. I have no idea why - it is a great novel. Read it! Well-written, great characters, thought-provoking and moving. And a page-turner too.
Read more
2 people found this helpful
Report abuse

Amazon Customer
1.0 out of 5 stars Did not get what I ordered
Reviewed in the United Kingdom on October 21, 2020
Verified Purchase
I was very disappointed that the book I received was LARGE PRINT. Nowhere was this indicated when I ordered the book and I am now too busy to return. This is not what I wanted and I feel deceived.
Read more
Report abuse

Carlo Lagorio
4.0 out of 5 stars Good book
Reviewed in the United Kingdom on July 26, 2018
Verified Purchase
Very interesting inside story about what means to grow up as muslim in a western country.
So far there are not so many books like this one.
Read more
Report abuse
See all reviews