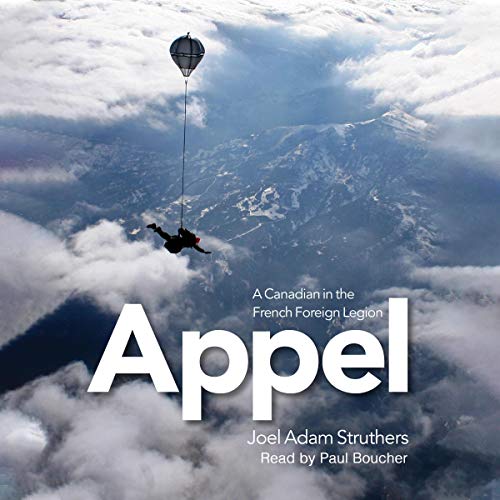 Appel: A Canadian in the French Foreign Legion

Appel: A Canadian in the French Foreign Legion is the first-hand account of the author’s six years as a professional soldier during the 1990s, and his experience in the Legion's elite Groupe des Commandos Parachutistes (GCP). Joel Struthers recounts the dangers and demands of military life, from the rigours of recruitment and operational training in the rugged mountains of France, to face-to-face combat in the grasslands of some of Africa’s most troubled nations.

Told through the eyes of a soldier, and interspersed with humorous anecdotes, Appel is a fascinating story that debunks myths about the French Foreign Legion and shows it more accurately as a professional arm of the French military. Struthers provides insight into the rigorous discipline that the Legion instills in its young recruits - who trade their identities as individuals for a life of adventure and a role in a unified fighting force whose motto is “Honour and Loyalty”.

From the Foreword: "Travelling through these pages, you will discover how a restless young Canadian turned himself into a professional soldier, and then a pathfinder immersed in a system that, even if could always be improved, remains a reference in terms of soldiering. You will appreciate the quasi-monastic life - made of satisfaction, celebration, hard training, operational commitments, but also of routine and service - of these soldiers who decided to leave everything they had to come and serve in the Legion. And finally you will discover from the inside this esprit de corps that empowers the Corps and helps these hommes sans noms to cope with the tensions of their new lives."

Read more
©2019 Wilfrid Laurier University Press (P)2020 Wilfrid Laurier University Press
Previous page
Next page
Learn more about membership
List Price: $20.99
You Save: $2.62 (12%)
By completing your purchase, you agree to Audible's Conditions Of Use and Amazon's Privacy Notice. Tax where applicable.
Sold and delivered by Audible, an Amazon company

4.7 out of 5 stars
4.7 out of 5
411 global ratings
How are ratings calculated?
To calculate the overall star rating and percentage breakdown by star, we don’t use a simple average. Instead, our system considers things like how recent a review is and if the reviewer bought the item on Amazon. It also analyzes reviews to verify trustworthiness.

KDD
5.0 out of 5 stars Honest account of life in the French Foreign Legion
Reviewed in Canada 🇨🇦 on May 16, 2019
Verified Purchase
A great book giving the reader an honest and direct telling of what’s it is like to join and serve in the FFL... from the simple but telling description about what everyone feels who joins just before they take that leap through the gates handing over their passport... through basic training in the unique circumstances where the Legion forms men from so many nationalities, races and religions into a single fighting force... fiercely loyal of its own... life in the Legion’s parachute regiment... to the life in the elite GCP platoon... This is sure to become a widely read modern reference book on what its like to join this military force... for those thinking of joining or those that are just curious... a great book.
Read more
2 people found this helpful
Helpful
Report abuse

Gerry Zyvitski
5.0 out of 5 stars The truth about the French Foreign Legion
Reviewed in Canada 🇨🇦 on June 28, 2021
Verified Purchase
Enjoyed the factual account of what life is like in the Legion. Full of personal experiences that the author shares with his readers. Very nice to see a Canadian author doing what he does best write ... well done!

mike b
5.0 out of 5 stars Add it to your library!
Reviewed in Canada 🇨🇦 on March 27, 2019
Verified Purchase
A humble and honest telling of what it takes to become a Legionnaire within the prestigious 2eREP and then a member of the GCP (Groupement des Commandos Parachutistes) Struthers dispels a few myths about the French Foreign Legion and tells of the gruelling mental and physical demands to make it among the elite units of the French military. He shares with the reader the constant cycles of intense training and deployments throughout war-torn parts of Africa. For any military reader or anyone interested in knowing a little more about the famed French Foreign Legion, this book is a definite read. Much respect! And thanks for sharing your story with us. 🇨🇦🇫🇷
Read more
2 people found this helpful
Helpful
Report abuse

Scott S.
5.0 out of 5 stars Well written and informative
Reviewed in Canada 🇨🇦 on October 5, 2021
Verified Purchase
Have read many military nonfiction books and this was one of the best, particularly as it was written by a Canadian who served in the FFL which is very unusual.
Read more
Helpful
Report abuse

Alex Klukus
5.0 out of 5 stars Amazing
Reviewed in Canada 🇨🇦 on July 30, 2021
Verified Purchase
The story is compelling and easy to get into! Lots of information given about joining the legion and the steps he took to get where he went without dragging on on subject for to long! Loved it
Read more
Helpful
Report abuse

Les Mader
5.0 out of 5 stars A fascinating story vividly written
Reviewed in Canada 🇨🇦 on October 6, 2021
Verified Purchase
This is a fabulous insight into the life of a modern legionnaire told engrossingly and with authority. It avoids the usual hyperbole and sensationalism of such stories
Read more
Helpful
Report abuse

R S
5.0 out of 5 stars A very compelling, well written and comprehensive account.
Reviewed in Canada 🇨🇦 on March 30, 2019
Verified Purchase
It's clear what this book is about from the foreword, and difficult to add to the reviews and what has already been posted on social media, some by his former colleagues.

What I will add, and to help put things in perspective, is that at the time of writing the REP would have been around 1200 strong. The GCP, comprising mainly of NCO's, was only 30 select, extremely fit, multi-skilled and intelligent individuals.

Appel literally goes above and beyond the regular regimental activities and into the heart of the GCP.

To accomplish what the author did during his time is very impressive.
Read more
One person found this helpful
Helpful
Report abuse
See all reviews

patrick locufier
5.0 out of 5 stars Great book!
Reviewed in the United Kingdom 🇬🇧 on November 29, 2020
Verified Purchase
A great read! Truly reminded me of my time shared with les légionnaires au Fort De Nogent for over a year, and à l'école militaire de Châteauroux avant celà. Enjoyable, insightful, unexagerated, filled with 'behind the scene' details. Not a technical book regarding battles, but a great personal book. Not a book about war but a book about people...Five Stars!
Read more
One person found this helpful
Report abuse

Sephen Robson-Cross
5.0 out of 5 stars Really good read
Reviewed in the United Kingdom 🇬🇧 on September 29, 2021
Verified Purchase
I’ve read a few books from authors who have either been in or are so call ‘experts’ on the Foreign Legion, most seem to have a negative attitude. This book gives a really balanced view on the legion giving the negative and positive sides. The difference between this author and others is that he wanted to be there, it was his choice, he lived the life and enjoyed it until the point that it was his time to leave. Really good read, really enjoyed it.
Read more
Report abuse

Gar Sayers
4.0 out of 5 stars This Legionnaire doesn’t disappoint!
Reviewed in the United Kingdom 🇬🇧 on July 22, 2020
Verified Purchase
Excellent read. A likeable man, clearly very tough and intelligent, he writes in a entertaining, informative way which illustrates life in the legion. As a lover of Simon Murray’s classic ‘Legionnaire’, I have been disappointed by many other biographical accounts. Certainly not by this one! 10/10
Read more
Report abuse

Stevie Martin
5.0 out of 5 stars True account of a legionniare.
Reviewed in the United Kingdom 🇬🇧 on May 28, 2021
Verified Purchase
This book was a great, honest and down to earth account of a true hero! Easy to read and answered a lot of the questions people who have an interest in armed forces and the famous foreign legion. This book has taught me a lot and helped me make the jump on joining. Off I go in 10 weeks!
Read more
Report abuse

Dan
5.0 out of 5 stars Must Buy
Reviewed in the United Kingdom 🇬🇧 on June 16, 2019
Verified Purchase
Absolutely fantastic read with some great insight into the responsibilities of the Groupe des Commandos Parachutists and their roles in operations. Some witty humour and overall a great read for anyone who is interested in what to expect as a career within the French Foreign Legion.
Read more
2 people found this helpful
Report abuse
See all reviews