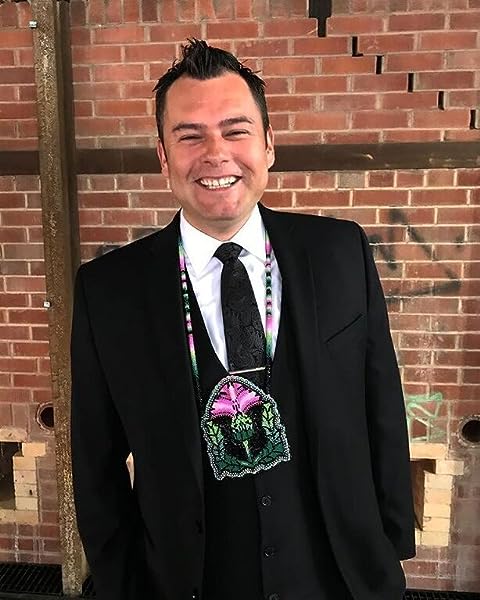 From the Ashes: My Story of Being Indigenous, Homeless, and Finding My Way Audio CD

by Jesse Thistle (Author)
4.7 out of 5 stars 1,619 ratings
See all formats and editions
Sorry, there was a problem loading this page. Try again.

Read more
Read more
Start reading From the Ashes on your Kindle in under a minute.

JESSE THISTLE is Métis-Cree, from Prince Albert, Saskatchewan, and an assistant professor in Humanities at York University in Toronto. From the Ashes was the top-selling Canadian book in 2020, the winner of the Kobo Emerging Writer Prize for Nonfiction, Indigenous Voices Award, and High Plains Book Award, and also a finalist for CBC Canada Reads. Jesse won a Governor General’s Academic Medal in 2016 and is a Pierre Elliot Trudeau Foundation Scholar and a Vanier Scholar. A frequent keynote speaker, he lives in Hamilton, Ontario, with his wife, Lucie, and is at work on multiple projects, including his next book. Visit him at JesseThistle.com.

4.7 out of 5 stars
4.7 out of 5
1,619 global ratings
How are ratings calculated?
To calculate the overall star rating and percentage breakdown by star, we don’t use a simple average. Instead, our system considers things like how recent a review is and if the reviewer bought the item on Amazon. It also analyzes reviews to verify trustworthiness.

Tecekelly
5.0 out of 5 stars What does Truth and Reconciliation look like?
Reviewed in Canada on November 3, 2019
Verified Purchase
Jesse Thistle generously, simply, and beautifully shares his raw, rich, and personal story - the truth that those living on Turtle Island need to know. We see our complicated ugly history and the brutal violence in our systemic racism, patriarchal practices, ever-present colonialism, and the sorry ineptitude of our institutions. We are given an intimate look at the life of the homeless person we pass on the street, and an understanding of what it means to need to assuage one's pain with addictive substances. We see the humbling, massive inner strength of this beautiful human being. Jesse Thistle does not cast blame, but we can easily and uncomfortably reach our own conclusions about our complicity in the trajectory of his life. We can be inspired by Mr. Thistle's spirit, by the love of those in his life, and by the robust Métis culture and people as we find our own role in Reconciliation.
Read more
28 people found this helpful
Helpful
Report abuse

Amazon Customer
5.0 out of 5 stars A truly unique life story
Reviewed in Canada on August 29, 2019
Verified Purchase
A powerful life story about how trauma, family history and Canadian history can shape a person. Jesse has been brave enough to share his journey through early hardships to unpredictable success. Once a homeless drug addict and now an university professor, we have a lot to learn from his story.

A great read and sure to become a Canadian classic!
Read more
16 people found this helpful
Helpful
Report abuse

Henry
5.0 out of 5 stars What a turn around
Reviewed in Canada on February 10, 2020
Verified Purchase
If you have even been in a low point in your life, I still doubt that you have been as low as the author of this book. Yet, from the very depths of homelessness, and drug addiction this man managed to turn it all around brilliantly.

A highschool drop out, homeless, drug addicted, and truly a pathetic character, to well written and scholarly professor that wrote this amazing memoir.

I am thankful a friend of mine recommended it and if you read it I think you would appreciate it as well.
Read more
11 people found this helpful
Helpful
Report abuse

bob Poffley
5.0 out of 5 stars Powerful
Reviewed in Canada on October 22, 2019
Verified Purchase
I also saw Jesse on CTV and his presence moved me to buy this book. So glad I did. I have to say that his contact with Peel Police fascinated me. My family is with Peel Police as well as Toronto Police. It is hard to fathom Jesse's history, struggles and his bravery. His relationship with his grandparents moved me to tears. No one wants to disappoint their family. This book is uplifting, emotional and a triumph. I highly recommend this to anyone struggling with, or know someone struggling, with addiction and hopelessness.
Read more
14 people found this helpful
Helpful
Report abuse

Jacob
5.0 out of 5 stars Thrilling Memoir about Homelessness
Reviewed in Canada on January 31, 2020
Verified Purchase
Thrilling memoir about homelessness in Canada. I usually don't like to read very much and read this book so fast! If you like "The Glass Castle" and "Educated", this book is for you. Highly recommend.
Read more

5.0 out of 5 stars Thrilling Memoir about Homelessness
By Jacob on January 31, 2020
Thrilling memoir about homelessness in Canada. I usually don't like to read very much and read this book so fast! If you like "The Glass Castle" and "Educated", this book is for you. Highly recommend.
Images in this review

Debbie Bateman
5.0 out of 5 stars Raw, truthful and complex
Reviewed in Canada on April 18, 2020
Verified Purchase
This is a powerful and deeply moving read by a very honest writer. I admire his poignant handling of unutterable hurtful feelings, particularly those from his time as a boy and later as an addict. Through each stage, he takes us inside his skin and shows us the world through his eyes. His is a voice we can trust. Each scene is packed with authenticity and courage. Using shadows and wolves to convey the malignant intent of people who were supposed to be taking care of him and his brothers, daring to touch both the ecstasy and the agony of addiction, this book is filled with messy human experiences in all of their truth and complexity. I believe books like this when they are taken inside and absorbed have the power to make our souls grow. And then there is the writing mastery: poetry combined with prose, sensory vividness, the light touch that leaves moral questions in our hands as the reader and so much more. Gratitude to the author for a heartfelt read. Thank you. I will read this book again.
Read more
5 people found this helpful
Helpful
Report abuse

Rachel Strojny
4.0 out of 5 stars Great Read
Reviewed in Canada on July 26, 2021
Verified Purchase
I purchased this book to read with a book club I joined for this summer. The story is good and the underlying message of hope and self-discovery is well represented. I would recommend this book to friends, family, and strangers to read.

My only issue is that a few (no more than 5) pages have large dark smudges across the page making it hard to read the right had side, about 2 inches thick (does not cover the entire page). Not sure if was just the copy I received from the seller or not. It also only occurs within the last 50-75 pages of the book.

Tammy Grose
5.0 out of 5 stars Way to go Jessie! Hope is what you inspire!
Reviewed in Canada on February 13, 2021
Verified Purchase
I was so glad I knew the ending. It was very raw and extremely sad. A well written book. It gave me a new perspective of those addicted to drugs, native people , and the importance of choosing our words wisely. It is a sad story that turned out well. I think it could be a real encouragement for those with no hope. This is not how the story has to end was my take away and I am so happy for Jessie Thistle. I hope that other natives could be inspired by his story.
Read more
One person found this helpful
Helpful
Report abuse
See all reviews

Silent Hunter
5.0 out of 5 stars An excellent memoir of addiction and recovery
Reviewed in the United Kingdom on June 12, 2021
Verified Purchase
An excellent autobiography of an indigenous Canadian's struggles with his identity, bad family relationships and drug addiction; a strong reminder of the dangers of the latter in particular. It is a bit disjointed but the author admits as much - he's had to rely on plenty of others to get the story in a coherent shape but he wasn't exactly taking notes at the time.

A particularly timely read with the recent discovery of a mass grave at a Canadian residential school and well worth checking out.
Read more
Report abuse

Sasha
3.0 out of 5 stars A tough story to read
Reviewed in Australia on January 23, 2022
Verified Purchase
What a rollercoaster this book was!! Definitely not my usual choice of easy and light-hearted reading. Every time I thought that Jesse’s life couldn’t possibly get any worse, it did, and his downward spiral continued. I was in awe during the whole story about just how much the human body can withstand. It was a long and exhaustive read and when I finally got to the happier ending my emotions were spent!
If you like this review and want to read more, follow me on Instagram - @books_and_bug
Read more
Report abuse

Alison Norman
5.0 out of 5 stars An unbelievable story
Reviewed in the United States on January 6, 2020
Verified Purchase
Jesse Thistle’s book tells what is an unbelievable story. You think, while reading it, this man shouldn’t be alive today! And yet, he lives and is doing critical work as a homelessness advocate and as a Metis history scholar. Jesse’s book is absorbing - you won’t want to put it down. It’s a book that will be enjoyed by a wide audience. It will make you think about the homeless person you pass downtown, and create empathy for those struggling with addiction. It should be required reading for government staff, police officers, and should be on high school reading lists everywhere.
Read more
3 people found this helpful
Report abuse

fai
5.0 out of 5 stars What an amazing journey
Reviewed in the United States on September 11, 2019
Verified Purchase
This is one of the best books I've ever read. It is an incredible journey and had me crying through out. Jesse Thistle has a wonderful way with words, poetic and direct at the same time.
Read more
5 people found this helpful
Report abuse
See all reviews
Back to top
Get to Know Us
Make Money with Us
Amazon Payment Products
Let Us Help You
EnglishChoose a language for shopping. CanadaChoose a country/region for shopping.
© 1996-2022, Amazon.com, Inc. or its affiliates