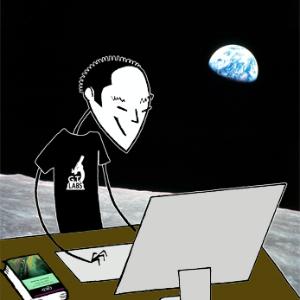 by Jim Ottaviani (Author), Maris Wicks (Illustrator)
4.8 out of 5 stars 78 ratings
See all formats and editions
Sorry, there was a problem loading this page. Try again.

In the graphic novel Astronauts: Women on the Final Frontier, Jim Ottaviani and illustrator Maris Wicks capture the great humor and incredible drive of Mary Cleave, Valentina Tereshkova, and the first women in space.

The U.S. may have put the first man on the moon, but it was the Soviet space program that made Valentina Tereshkova the first woman in space. It took years to catch up, but soon NASA’s first female astronauts were racing past milestones of their own. The trail-blazing women of Group 9, NASA’s first mixed gender class, had the challenging task of convincing the powers that be that a woman’s place is in space, but they discovered that NASA had plenty to learn about how to make space travel possible for everyone.

"Exhilarating―as well as hilarious, enraging, or both at once depending on the reader. "―Kirkus, starred review and a Best Book of 2020

"Gobs of humor, lively artwork, and tidy explanations of the science make this a standout among the vast field of books about the U.S. space program." ―Booklist, starred review

"Readers will be intrigued and inspired to dive into further research to understand some of the jargon and learn more about the women profiled here... A stellar addition to all collections." ―School Library Journal, starred review

"With plenty of eye-rolling takes on male-designed spacecraft faux pas and enthusiastic crew reveling in flight adventures, Ottaviani and Wicks drive home the message that it’s all about teamwork, and no team can function without diverse members."―The Bulletin of the Center for Children's Books

Jim Ottaviani has written fifteen (and counting) graphic novels about scientists. His most recent books include Naturalist (with E.O. Wilson), Astronauts: Women on the Final Frontier, Hawking, The Imitation Game, a biography of Alan Turing, Primates, about Jane Goodall, Dian Fossey, and Biruté Galdikas; and Feynman, about the Nobel-prize winning physicist, artist, and raconteur. His books are New York Times bestsellers, have been translated into a dozen languages, and have received praise from publications ranging from Nature and Physics World to Entertainment Weekly and Variety.

Jim lives in Michigan and comes to comics via careers in nuclear engineering and librarianship.

Maris Wicks lives in sunny Somerville, Massachusetts. She is the author behind Human Body Theater, as well as the illustrator of New York Times Bestselling Primates, with Jim Ottaviani. Wicks has also created comics for Spongebob Comics, DC and Marvel. When Maris is not drawing comics, she can be found prepping slides for her collection of vintage microscopes.
Start reading Astronauts: Women on the Final Frontier on your Kindle in under a minute.

Jim Ottaviani has worked in news agencies and golf courses in the Chicago area, nuclear reactors in the U.S. and Japan, and libraries in Michigan. He still works as a librarian by day, but stays up late writing comics about scientists. When he's not doing these things, he's spraining his ankles and flattening his feet by running on trails. Or he's reading. He reads a lot. Elsewhere on the web you can find him at www.gt-labs.com .

4.8 out of 5 stars
4.8 out of 5
78 global ratings
How are ratings calculated?
To calculate the overall star rating and percentage breakdown by star, we don’t use a simple average. Instead, our system considers things like how recent a review is and if the reviewer bought the item on Amazon. It also analyzes reviews to verify trustworthiness.
Top reviews

Andy Baird
5.0 out of 5 stars A great read
Reviewed in the United States on February 14, 2020
Verified Purchase
The artwork is excellent, the stories are engaging, and you care about the characters. Did I mention that the science is accurate as well? But it doesn't dominate the stories; instead, it moves them along. Best of all, it's all true! I'm an elderly space buff, but I enjoyed the heck out of this book, and even learned a few things I hadn't known.

If I had one nit to pick, it would be this: in 150+ pages, only two panels are devoted to the tragedies of spaceflight. The treatment is brief and bland: "when you make a serious mistake in this job, it costs lives. We've lost three crews: Apollo 1 in 1967, Challenger in 1986, and Columbia in 2003. NASA's Day of Remembrance happens every year. I rarely miss it."

I understand that this book is intended to inspire. But I think the authors missed a valuable opportunity to describe how astronauts deal with major failures. Instead of the bland sentences I just quoted, how about this? "Each time, we were devastated. We had lost friends and colleagues. We grieved those losses. But we moved on, because we knew that's what they would have wanted us to do--determined never to make the same mistakes again." Something like that would have been much more meaningful, and I think, true to the inspirational spirit of the book. Just a thought.

But that's a quibble. This book is superb. As others have said, it belongs in every school and public library. And it isn't just girls who can enjoy it. Boys will learn a few things too... not least of which is how dumb it is to exclude women from any activity.
Read more
6 people found this helpful
Report abuse

Nathan Camp
5.0 out of 5 stars An absolute delight.
Reviewed in the United States on February 15, 2020
Verified Purchase
This book is funny, informative and beautifully illustrated. It definitely fits the "all ages" category since kids and adults alike can enjoy it.
Read more
3 people found this helpful
Report abuse

Amazon_Enthusiast
5.0 out of 5 stars Great for Kids
Reviewed in the United States on March 15, 2022
Verified Purchase
My niece loved this book so much that she read the entire thing straight through in under 1 hour!
Read more
Report abuse

Cara
5.0 out of 5 stars Must buy! All around amazing
Reviewed in the United States on May 28, 2020
Verified Purchase
Amazing book about pioneering women in space. The comic format really brings it to life. My daughter and I read both loved it.
Read more
Report abuse

Mondongo
5.0 out of 5 stars Space! Women issues! What's not to like?
Reviewed in the United States on February 13, 2020
Verified Purchase
A great read -- I loved the inside look to the story of women in the space program and a trip along on the first steps of the International Space Station.
Read more
2 people found this helpful
Report abuse
See all reviews