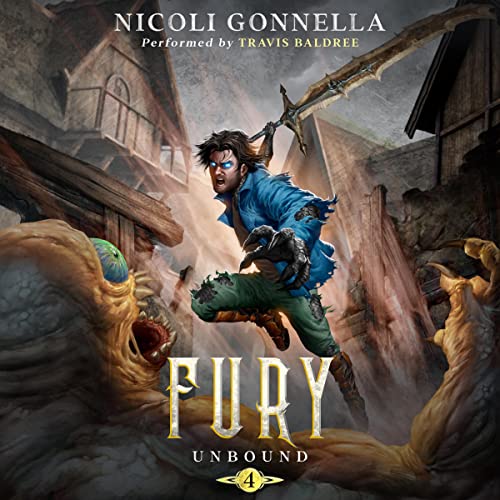 The tower has fallen. Banners fly. War brews in the rubble.

Felix Nevarre, slayer of the Ravager King and destroyer of Domains, isn't going down without a fight. The Guild Tower has fallen, and Haarwatch has been split into factions vying for supremacy, and the people despair as monsters overrun the city.

Bloody battle is waged through the streets, but Felix’s power has grown—his core stuffed full with the spoils of his victory—and he's looking to put it to use. When the Inquisition advances its grip on the city and waves of monsters attack, he pushes back.

A new faction rises, gathering beneath Felix's banner those that are too weak for the Guilders, or too faithless for the Redcloaks. The goal of this faction isn’t domination, but survival. In their midst, a dangerous idea begins to brew. It sings in the Spirit and ignites the Mind, while the Body trembles with bated breath. A blue flame blazes away in the hearts of the fearful, leaving behind only hope....

Get 3 months of Audible for only $5.95/mo!
You get 3 credits and unlimited access to podcasts, originals and more.
Limited time offer! Get started
Learn more about membership
List Price: $37.53
You Save: $4.69 (12%)
By completing your purchase, you agree to Audible's Conditions Of Use and Amazon's Privacy Notice. Tax where applicable.
Sold and delivered by Audible, an Amazon company

4.7 out of 5 stars
4.7 out of 5
2,331 global ratings
How are ratings calculated?
To calculate the overall star rating and percentage breakdown by star, we don’t use a simple average. Instead, our system considers things like how recent a review is and if the reviewer bought the item on Amazon. It also analyzes reviews to verify trustworthiness.

Kindle Customer
5.0 out of 5 stars Wow! High octane action!
Reviewed in Canada 🇨🇦 on October 4, 2022
Verified Purchase
It's war! Super extreme fights, laughingstock spells, epic explosions! What else can you ask for. Well, truth I want more more! He is from another world why not invent things. Just a thought! Keep up with the great work! Thank you! I can't wait for the next book!
Read more
Helpful
Report abuse

RBala
3.0 out of 5 stars okay, but deeply flawed
Reviewed in Canada 🇨🇦 on November 10, 2022
Verified Purchase
It’s really good on the surface, but anybody who stops to think in the middle will gape at the discrepancies and the lack of critical thought in the story, not to mention the shallow characters. Still, it is an acceptable read, just suspend your disbelief for the ride. I realize my words are almost unnecessarily harsh, but the characters, especially the MC are very inorganic— more like cartoon characters than anything. Where is the character growth, the changing and evolving relationships? My greatest gripe though is the lack of breadth to the world and even to the storytelling. There is a spotlight put in every scene where it seems like everybody but the subject of the scene are lounging around, even in fight scenes! Also there is a spotlight put in the wider plot, where the plot progresses only in one place at a time.
Read more
Helpful
Report abuse

K
3.0 out of 5 stars Screaming solves everything
Reviewed in Canada 🇨🇦 on November 17, 2022
Verified Purchase
The most unstoppable force in this LITRPG is the power of the scream.

Whenever the main character fights someone stronger than him? Scream. Magic not doing what he wants? Scream. Gods put a curse on him? Scream.

Kindle Customer
5.0 out of 5 stars Better and better
Reviewed in Canada 🇨🇦 on November 26, 2022
These books just keep getting better and better. The action is intense and relentless, the protagonist likeable, and the world interesting. What more could you ask for?
Read more
Helpful
Report abuse

Chaz
5.0 out of 5 stars Universe mechanics detail
Reviewed in the United Kingdom 🇬🇧 on September 30, 2022
Verified Purchase
This book was good. I loved it. It went to a lot of detail on the universe details and I love those details and enjoyed it as thr MC was developing. You can guess the depths the author went to, to set up the book. Looking forward to many other books.
Read more
Report abuse

Gazzmann
4.0 out of 5 stars A great continuation
Reviewed in the United Kingdom 🇬🇧 on October 9, 2022
Verified Purchase
I'm loving the characters and story more each book and cannot wait to see what happens next. There are some mistakes here and there but they are just bumps in the road of a good story. Cheers!
Read more
Report abuse

Phoenix
5.0 out of 5 stars Riveting!!
Reviewed in the United Kingdom 🇬🇧 on October 8, 2022
Verified Purchase
Great read, really enjoyed it, can’t wait for the next one! I hope the Hand isn’t dead, author didn’t mention what happened to him. Also wonder if the hand actually loves Vess?
Read more
Report abuse

Tiffany
5.0 out of 5 stars Great read
Reviewed in the United Kingdom 🇬🇧 on October 13, 2022
Verified Purchase
Really enjoyed reading this action packed story. It is well written with plenty of battles to keep you entertained as well
Read more
Report abuse

Kindle Customer
5.0 out of 5 stars A cracking read
Reviewed in the United Kingdom 🇬🇧 on October 4, 2022
Verified Purchase
One of the rare LitRPG that hasn't stalled by this stage . A thoroughly likeable hero and his growing support team.
Read more
Report abuse
See all reviews