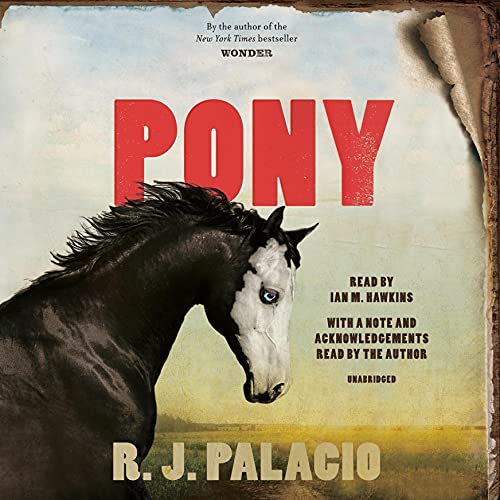 The best-selling author of Wonder returns with an enthralling adventure about a boy on a quest to rescue his father, with only a ghost as his companion and a mysterious pony as his guide.

Twelve-year-old Silas is awoken in the dead of night by three menacing horsemen who take his father away. Silas is left shaken, scared, and alone, except for the presence of his companion, Mittenwool...who happens to be a ghost. When a pony shows up at his door, Silas makes the courageous decision to leave his home and embark on a perilous journey to find his father. Along the way, he will face his fears to unlock the secrets of his past and explore the unfathomable mysteries of the world around him.

R. J. Palacio spins a harrowing yet distinctly beautiful coming-of-age story about the power of love and the ties that bind us across distance and time. With the poignant depth of War Horse and the singular voice of True Grit, this is one of those rare books poised to become an instant classic for readers of all ages.

“A wonderful story of courage.... It's got the feeling of a modern classic.” (Jorge Lacera, NPR)

Read more
©2021 R. J. Palacio (P)2021 Listening Library
Previous page
Next page
Learn more about membership
List Price: $35.09
You Save: $4.39 (13%)
By completing your purchase, you agree to Audible's Conditions Of Use and Amazon's Privacy Notice. Tax where applicable.
Sold and delivered by Audible, an Amazon company

4.6 out of 5 stars
4.6 out of 5
561 global ratings
How are ratings calculated?
To calculate the overall star rating and percentage breakdown by star, we don’t use a simple average. Instead, our system considers things like how recent a review is and if the reviewer bought the item on Amazon. It also analyzes reviews to verify trustworthiness.

Debbie Green
5.0 out of 5 stars Pony
Reviewed in Canada 🇨🇦 on January 25, 2022
Verified Purchase
Just finished this book. Wow what a great read. I highly recommend it. Thank you
for the adventure , till next time.
Read more
2 people found this helpful
Helpful
Report abuse

Amazon Customer
5.0 out of 5 stars Great book
Reviewed in Canada 🇨🇦 on November 9, 2021
Verified Purchase
A gift to a 9 years old boy. He strongly recommended me to read it after reading it. Great gift and great book!
Read more
Helpful
Report abuse

Coll
5.0 out of 5 stars 🐎
Reviewed in Canada 🇨🇦 on December 29, 2021
This great book was given to me for Christmas, and I loved it. Honestly, I couldn’t put it down. I needed to find out what would happen to Silas on his wild ride to find his father. I was rooting for him and his mysterious Arabian pony every step of the way. Likely more suitable for a 12-15 year old reader but I highly recommend for any aged readers who love wonderful stories.
Read more
Helpful
Report abuse

Super Eng Chick
5.0 out of 5 stars Original and Exciting!
Reviewed in Canada 🇨🇦 on October 7, 2021
I got this as an audiobook for my family to listen to on a recent road trip. We enjoyed it immensely. The narration by Ian M. Hawkins was excellent.

Having thoroughly enjoyed Wonder, I was excited to see another book by R.J. Palacio. You should know that this book isn't anything like Wonder at all. However, don't let that stop you from picking it up (or having a listen). This is a marvelous book in its own right.

Set in the mid to late 1800s in Wild West America, this book is written in that old-time vernacular (which my kids found delightful) and follows 12 year old Silas (whose best friend is a ghost named Mittenwool) who sets out to rescue his father (with the help of a mysteriously intuitive horse, a US Marshall and a small town Sheriff and Deputy) when Pa is taken by local ruffians who believe he is a famous former counterfeiter.

Very well researched and highly entertaining, this book is full of memorable characters and interesting topics, such as early photographic processing techniques (who knew that could be so interesting?), classic literature, and themes of bravery, acceptance and kindness.

My kids are 8 & 12 and both highly recommend this audiobook.
Read more
Helpful
Report abuse
See all reviews

K Lancaster
5.0 out of 5 stars A gripping, moving novel.
Reviewed in the United Kingdom 🇬🇧 on October 29, 2021
Verified Purchase
This is supposed to be for young people but my partner and I who are both middle aged loved this book. There is nothing in here to upset younger people but there is also much to keep an older reader entranced. I will try not to use too many cliches but, this is a really page turner. Really looking forward to reading more by the same author.
Read more
3 people found this helpful
Report abuse

Bionic Sarah
3.0 out of 5 stars 5 go wild in the Wild West
Reviewed in the United Kingdom 🇬🇧 on October 21, 2021
Verified Purchase
I think this is more a children’s book than an adult one .I loved Wonder and bought this book on the basis of this
I was disappointed the story is very simple and there are fewer twists and turns than I need to find a novel fully satisfactory .It did keep me entertained for a few hours neutral lacked the substance and depth that I expected
Read more
Report abuse

Kindle Customer
5.0 out of 5 stars Beautiful and haunting
Reviewed in the United Kingdom 🇬🇧 on March 2, 2022
Verified Purchase
I literally read this is one sitting. It is beautiful and incredibly moving. A story of adventure, loss, grief and indeed hit as well as the powerful connections between people. Read it, you won't regret it.
Read more
Report abuse

Angela Lush
5.0 out of 5 stars This was a gift
Reviewed in the United Kingdom 🇬🇧 on November 19, 2021
Verified Purchase
This was a gift so unable to write a revire
Read more
Report abuse

Izzy
5.0 out of 5 stars Heart warming
Reviewed in the United Kingdom 🇬🇧 on January 23, 2022
Verified Purchase
Renews your faith in the love and selfless kindness of others
Beautifully written and atmospheric tale of a special journey
Read more
Report abuse
See all reviews