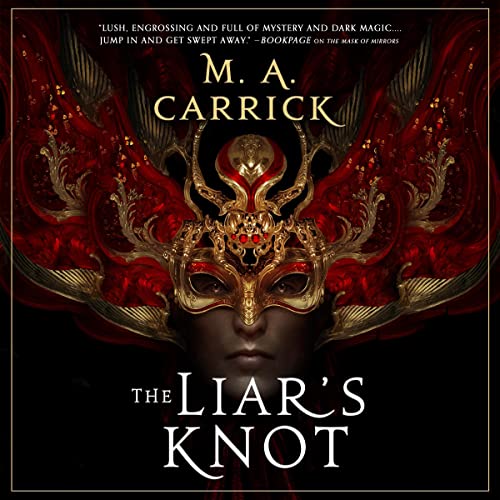 M. A. Carrick (Author), Nikki Massoud (Narrator), Orbit (Publisher) & 0 more
4.6 out of 5 stars 422 ratings
See all formats and editions
Sorry, there was a problem loading this page. Try again.

A clever con artist, a legendary vigilante, and a dashing crime lord must fight to free their city from the clutches of a dark and ancient magic in the second novel of M. A. Carrick's “utterly captivating” Rook & Rose trilogy (S. A. Chakraborty, author of The City of Brass).

Trust is the thread that binds. And the rope that hangs.

In Nadežra, peace is as tenuous as a single thread. The ruthless House Indestor has been destroyed, but darkness still weaves through the city’s filthy alleys and jewel-bright gardens, seen by those who know where to look.

Derossi Vargo has always known. He has sacrificed more than anyone imagines to carve himself a position of power and influence among the nobility, hiding a will of steel behind a velvet smile. He'll be damned if he lets anyone threaten what he's built.

Grey Serrado knows all too well. Bent under the yoke of too many burdens, he fights to protect the city’s most vulnerable. Sooner or later, that fight will demand more than he can give.

And Ren, daughter of no clan, knows best of all. Caught in a knot of lies, torn between her heritage and her aristocratic masquerade, she relies on her gift for reading pattern to survive. And it shows her the web of darkness that traps her city.

But all three have yet to discover just how far that web stretches. And in the end, it will take more than wits and knives to cut themselves free.

4.6 out of 5 stars
4.6 out of 5
422 global ratings
How are ratings calculated?
To calculate the overall star rating and percentage breakdown by star, we don’t use a simple average. Instead, our system considers things like how recent a review is and if the reviewer bought the item on Amazon. It also analyzes reviews to verify trustworthiness.

Dakara
4.0 out of 5 stars Well done!
Reviewed in Canada 🇨🇦 on January 4, 2022
Verified Purchase
Even though found myself referring to the Dramatis personae frequently, I enjoyed this second book as much as the first one. The characters were interesting, the magic, different and the world description, unique. First time ever I loved a spider!
Read more
Helpful
Report abuse

Amanda
4.0 out of 5 stars The Liar’s Knot is aptly named.
Reviewed in Canada 🇨🇦 on January 6, 2022
When we left Ren, Grey and Vargo at the end of The Mask of Mirrors it’s clear that they’ve all created their own knotted webs of lies. Unsurprisingly, those webs only continue to grow tighter and even more tangled in each other’s in this book. But what *is* surprisingly thrilling is watching the way their investigations of other falsehoods surrounding them in the city of Nadežra begin to unravel many of their own lies.

Ren has finally succeeded in her con to become an accepted relative to the noble House Traementis after a high cost that leaves her with a heavy heart. Only the two other masks she has to wear – both more closely tied to her true heritage – gives her some reprieve, and she’s convinced that with those identities she may be able to do some good. Vargo’s elevation to nobility is met with sneers by those who will never see him as anything but a low-class crime lord, but he has no intention of letting any of them get in the way of his plans. He and his secret spirit companion, Alsius, have more dirt on many of these callous elites than they could ever imagine. And Grey is having his own troubles with the nobility after a change in leadership in the Vigil turns toward a sinister objective. Not to mention that he often finds himself struggling to choose between fulfilling a secret duty or getting his revenge on Vargo, the man responsible for his brother’s death.

There are ton of things going with all three of these characters, but on the whole Vargo is definitely the star of The Liar’s Knot. We learn much more about his past, his motivations and the mysterious spirit companion that resides within his poisonous pet spider. Alsius actually ended up becoming one of my favorite side characters due his chatty nature and the revelations he brings about some of Vargo’s intentions. Vargo also has great dynamics with both Ren and Grey, who have their own reasons to be furious with him, and it was fun to see the way those inevitable clashes all played out.

Which isn’t to say that there aren’t any exciting things going on with the others. The side POV characters such as Tess, Sedge and Giuna are as likeable as always and I enjoyed getting their view into current events. And though I tend to be picky with romance storylines, I was actually invested in the gradually developing romance between Ren and Grey. It never felt rushed, out of place or took too much attention away from the plot (which are my usual pet peeves) so I was a rather pleased spectator.

The characters and their relationships aside, there was also plenty of action. The revolving plotlines were well-balanced and each interesting in their own ways. Even if a certain plotline would have to fade into the background for a few chapters while another got its due attention, there were always compelling hints and threads that would tie things together eventually.

However, if the first book had more elements of a “fantasy-of-manners” novel with some vigilantism and duels all mixed in, then I’d say this book contains more elements of skullduggery and magical scholarship rather than social politicking. There are jail breaks and turf wars and infiltrations of secret numinatria societies, which made for some great scenes. Then there are also many discussions and uses of the various magic systems in this world. Sometimes those applications were fascinating to see, but at other times it could slow down the pace of the book as often each aspect had to be explained. I certainly admire the complexity of the worldbuilding and the special care that was taken for the magic system, but I found this book tended to infodump in a dry way at times.

That one complaint aside, I’m still very much satisfied and eager to see what happens to this cast next.

Thank you NetGalley, Little, Brown Book Group UK and Orbit for providing the free eARC of this book in exchange for an honest review.
Read more
Helpful
Report abuse
See all reviews

Antennenwels
5.0 out of 5 stars An excellent sequel!
Reviewed in Germany 🇩🇪 on December 7, 2021
Verified Purchase
I adored "The Mask of Mirrors", it was the best book I’ve read all year and my anticipation for the sequel was therefore through the roof.
Whenever I start the sequel to a book I loved, I’m a tad nervous… what if it isn’t as good as the first, or worse, what if it diminishes my joy of the first one…
Well, in this instance, my fears could not have been shattered more thoroughly.

I loved the Liar’s Knot! It excels at everything that was great in the first book and I am confident that everyone that loved The Mask of Mirrors will equally be bewitched by its sequel.

The story continues immediately where we were left off in the last book and all our three main characters are back. Ren, Grey and Vargo all have their own arc in this sequel and following them was such a joy. They (and all the side characters) are multi-layered and seeing their struggles and how they work against and/or with each other was a large part of what made the story so impactful.

The world-building was another high point in the Mask of Mirrors, and the authors continue to build on it in a way that feels incredibly innovative and real. There are so many details to this world and its cultures, politics, religion and magic systems. It is an excellent example for deep world-building in my opinion. The whole story takes place in Nadežra and the city truly comes alive, it feels like its own character at times. What makes the world and its people feel so real is the sheer complexity of everything. Languages, traditions, religions and magic are all tightly interwoven and beautifully complex (and even chaotic at times). Which is what makes the world ring true and mirrors actual real-world cultures! We learn a lot more about the different magic systems in this book, which is another aspect I really enjoyed.

The plot is as intricate as in the first book, with many different threads. Many questions are answered from the first book… some of which I didn’t even realise I should have asked! I’m already excited to reread the first book and see all the hints for things yet to come. There are lots, and I mean lots of secrets. The title of the book is very fitting, but seeing characters with different levels of knowledge about each other interact was so much fun. And when secrets are finally revealed (though not all of them) the pay-off is just beautiful.
The stakes are high in this second book and based on the ending will be even higher in the third! The ending was very satisfying and makes me eager for the third and last book in the series!

In short: An excellent sequel, solidifying The Rook and Rose Series as one of my all-time favourite fantasy series.
Read more
2 people found this helpful
Report abuse

Seafire
5.0 out of 5 stars Excellent
Reviewed in Italy 🇮🇹 on April 4, 2022
Verified Purchase
These books are so good I'm going to go back to the beginning and reread them. Apparently there will be a third, but it's not even got a publication date. Some of the names are a bit of a trial, which is another reason to reread both books.... I could have done with a pronunciation guide.
Read more
Report abuse

Julia
5.0 out of 5 stars Wonderful continuation of a great series!
Reviewed in Germany 🇩🇪 on June 17, 2022
Verified Purchase
As with the first book I devoured this novel in a day and had a great time while doing it! Favorite characters return, more lore and what a cliffhanger!
Read more
One person found this helpful
Report abuse

Irina
5.0 out of 5 stars Great sequel!
Reviewed in the United States 🇺🇸 on December 23, 2021
Verified Purchase
This series is just gold.

Even though this one felt a little bit slower than the first one, it wasnt any less thrilling. Clearly The Liar's Knot was much more character driven than plot driven, but I assure you there's plenty of plot for you to enjoy. The ending was neat and the next book's excerpt at the end of this book has me more excited than it should about the sequel. I can't wait!
Read more
One person found this helpful
Report abuse
See all reviews