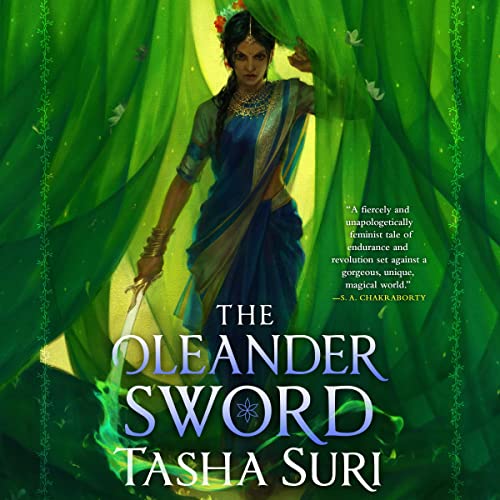 The Jasmine Throne has been hailed as a series opener that will "undoubtedly reshape the landscape of epic fantasy for years to come" (Booklist, starred). Now, award-winning author Tasha Suri's provocative and powerful Burning Kingdoms trilogy continues with The Oleander Sword.

The prophecy of the nameless god—the words that declared Malini the rightful empress of Parijatdvipa—has proven a blessing and curse. She is determined to claim the throne that fate offered her. But even with the strength of the rage in her heart and the army of loyal men by her side, deposing her brother is going to be a brutal and bloody fight.

The power of the deathless waters flows through Priya’s blood. Thrice born priestess, Elder of Ahiranya, Priya’s dream is to see her country rid of the rot that plagues it: both Parijatdvipa's poisonous rule, and the blooming sickness that is slowly spreading through all living things. But she doesn’t yet understand the truth of the magic she carries.

Their chosen paths once pulled them apart. But Malini and Priya's souls remain as entwined as their destinies. And they soon realize that coming together is the only way to save their kingdom from those who would rather see it burn—even if it will cost them.

"A fierce, heart-wrenching exploration of the value and danger of love." —Publishers Weekly (starred review)

"I loved it.” —Alix E. Harrow, Hugo award-winning author of The Once and Future Witches

For more from Tasha Suri, check out:

The Burning Kingdoms
The Jasmine Throne
The Oleander Sword

The Books of Ambha
Empire of Sand
Realm of Ash

Our best offer yet
Get 3 months free!
Limited time offer. Get started
Learn more about membership
List Price: $42.87
You Save: $5.36 (13%)
By completing your purchase, you agree to Audible's Conditions Of Use and Amazon's Privacy Notice. Tax where applicable.
Sold and delivered by Audible, an Amazon company
Share

4.5 out of 5 stars
4.5 out of 5
207 global ratings
How are ratings calculated?
To calculate the overall star rating and percentage breakdown by star, we don’t use a simple average. Instead, our system considers things like how recent a review is and if the reviewer bought the item on Amazon. It also analyzes reviews to verify trustworthiness.
Top reviews

Amy Braun
VINE VOICE
5.0 out of 5 stars Elegant and Bittersweet
Reviewed in Canada on September 3, 2022
The sequel to THE JASMINE THRONE has more of everything: romance, drama, action, and stakes. It is another beautifully written story about love and sacrifice, and will leave a bittersweet taste in the mouths of readers.

All of the characters are pushed to their breaking points. No one leaves the story unscathed, and the finale is sure to leave readers shocked and thrilled.

Malini continued to grow in her power, becoming a fearsome empress by the end. Priya also pushed herself to the limits and paid a dear price for what and who she loved. Bhumika is still one of my favourites and her story broke my heart so many times. I adore Rao and his loyalty, and can’t wait to see where his journey goes next.

The plot balances various relationships and political plots. As with the previous book, it’s a slow but ultimately rewarding burn. The romance and friendships hit on a deeply emotional level, which makes the end of each arc all the more devastating.

The lore is expanded and adds to this breathtaking world. Tasha Suri writes with a beautiful style that almost makes this read like an ancient myth. This is a very unique and vividly imagined series. I can’t wait to see how it ends!
Read more
Helpful
Report abuse
See all reviews

Jo H
5.0 out of 5 stars Excellent follow-up to The Jasmine Throne
Reviewed in the United States on August 24, 2022
Verified Purchase
SAPPHIC BOOK BINGO: not a romance, out of your comfort zone, POC author/character, bet or dare, established couple; UNICORN: 400+ pages, more than 2 POVs, faith (possibly other categories)

This is not a standalone story. It wasn't that long ago that I'd read the first book, and I still had to refer to the cast of characters reference every once in a while. Priya and Milina went their separate ways at the end of The Jasmine Throne, and this novel started off with both of them going forward with their plans for the future of their own regions. Priya and Bhumika used their thrice-born powers to try to keep and prevent the rot from spreading to more people and crops. Milina sought support for a war against her corrupt brother, Chandra. Chandra's fake Mother's fire was a challenge for Milina and her army, so she wrote to Priya, and she came out to help. The true source of the rot started to stalk Bhumika and Priya, becoming dangerous to their region, and the yaksa, the manifested rot spirits, began revealing their true intentions. The setup for book three is already making me excited for Suri's next book. So far, it's a fantastic series that many readers will love.
Read more
2 people found this helpful
Report abuse

Anemone
5.0 out of 5 stars Stellar
Reviewed in the United States on August 21, 2022
Verified Purchase
Just as amazing as the first. The lush world that draws you in and makes you live in it while you read. The compelling and tragic characters. There's nothing about these books I don't love. Except Chandra. I even loved the heart wrenching conclusion. I cannot wait for the third installment.
Read more
Report abuse

Amazon Customer
5.0 out of 5 stars Loved!
Reviewed in the United States on August 26, 2022
Verified Purchase
I don’t think I’ve loved a fantasy series (or really any book) as much as The Jasmine Throne and the Oleander Sword. I will be waiting (very impatiently, I might add) for the next book! So good!
Read more
Report abuse
See all reviews