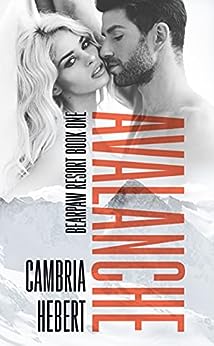 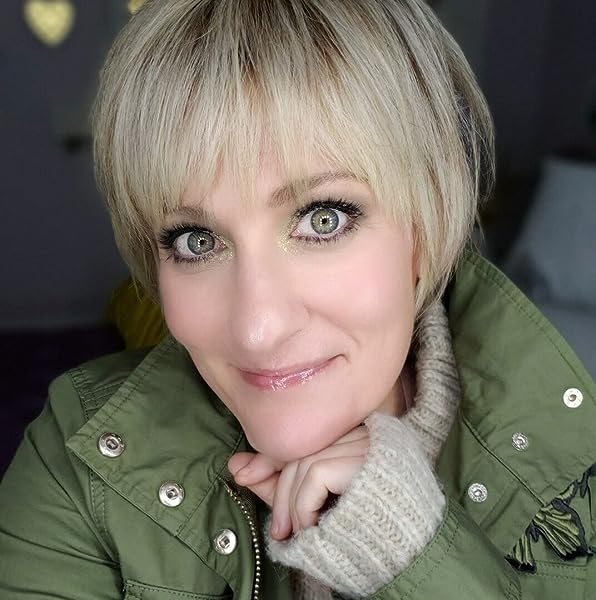 by Cambria Hebert (Author) Format: Kindle Edition
Book 1 of 5: BearPaw Resort
See all formats and editions
Sorry, there was a problem loading this page. Try again.
Don’t get caught in the surge.

Through a bullet hole in a wall, I watch a man bleed to death.
Those responsible think their crime died with the victim, until I identify them.
What’s a girl to do when she’s being hunted by murderers
witness protection can’t even stop?
Run.
My only refuge is a place I vowed to never go again.
When it’s do or die, an eight-year-old heartache suddenly seems trivial.
Besides, he won’t be there anyway.
But he is.
Turns out my old pain feels brand new the second his eyes meet mine.
I can’t leave. I can’t stay.
This snowy town that’s supposed to be my shelter
suddenly exposes me more than before.
With no one else to lean on, Liam becomes my lifeline.
Now we’re both running for our lives,
trying not to get swept away.

Cambria Hebert is a bestselling novelist of more than fifty titles. She went to college for a bachelor’s degree, couldn’t pick a major, and ended up with a degree in cosmetology. So rest assured her characters will always have good hair.

Besides writing, Cambria loves a pumpkin spice latte, staying up late, sleeping in, and watching K drama until her eyes won’t stay open. She considers math human torture and has an irrational fear of chickens (yes, chickens). You can often find her running on the treadmill (she’d rather be eating a donut), painting her toenails (because she bites her fingernails), or walking her chihuahuas (the real bosses of the house).

Cambria has written in many genres, including new adult, sports romance, male/male romance, sci-fi, thriller, suspense, contemporary romance, and young adult. Many of her titles have been translated into foreign languages and have been the recipients of multiple awards.

The Hashtag series for Best Contemporary Series of 2016 (UtopiaCon 2016)

The Hashtag series for Best Contemporary Series of 2015 (UtopiaCon 2015)

#NERD book trailer is the winner of Best Book Trailer of 2016 (UtopiaCon 2016) watch it here: youtu.be/Toj7zqBOLV4

#Nerd Official Book Trailer named by film-14.com as one of the Top 50 Most Cinematic Book Trailers of All Time.

You can find out more about Cambria and her titles by visiting her website: http://www.cambriahebert.com.

4.5 out of 5 stars
4.5 out of 5
157 global ratings
How are ratings calculated?
To calculate the overall star rating and percentage breakdown by star, we don’t use a simple average. Instead, our system considers things like how recent a review is and if the reviewer bought the item on Amazon. It also analyzes reviews to verify trustworthiness.
Top reviews

Chels B
5.0 out of 5 stars I Survived the Surge!
Reviewed in Canada on April 27, 2018
Verified Purchase
Boarding? Dogs? Danger? Lost Love?
Avalanche has it ALL, and so much more. All the stars for Cambria Hebert’s most recent release!

“I vowed to never return, even to get back the chunk of my heart that had unfortunately stayed behind. Even after all these years, I knew it was still here. I felt it.”

Bellamy Cutler is no stranger to hardship. But one emotionally-charged decision changes her fate. She is strong, smart and selfless; even in the face of danger. Cue the one and only Liam Mattison. Hot damn!! He was everything I could have possibly wanted.

Avalanche is fast-paced, and will keep you on your toes. I started reading this one and BAM … I was already halfway through the book. You will not able to put it down!! Liam and Bellamy share an intense connection. Chemistry that was undeniable upon their first meeting and only grown as they find their way back to each other.

“Thought about me, did you?” Every. Single. Day.

I not only fell in love with Liam, Bellamy & Charlie (gah, his dog stole my heart), but I adored the entire BearPaw Resort family! I can’t wait to read more from these characters.
Read more
Helpful
Report abuse

Joanne Soucy
5.0 out of 5 stars WOW!!!
Reviewed in Canada on September 21, 2021
Verified Purchase
What an excellent book this was! Never read Cambria Hebert before! My first book of hers and it sure won't be my last. Looking forward to reading all her other books!! Enjoyed it so much!!
Read more
Helpful
Report abuse

Michèle A.
5.0 out of 5 stars I’m hooked!
Reviewed in Canada on April 2, 2018
I loved all the books from this author, and I also fell in love with this book and these characters. I can’t wait for the second book and to follow what happens next. I feel like we just got a glimpse. Thank you for making me feel so much!
Read more
Helpful
Report abuse
See all reviews

➳ Raj
4.0 out of 5 stars Suspense and Second Chance Love at BearPaw Resort!
Reviewed in the United Kingdom on April 3, 2018
Verified Purchase
Avalanche was my first read by Cambria Herbert despite having Nerd on my kindle still unread, I know I know it’s now bumped up after reading Avalanche lol. From the get go the suspense in this book sucked me in and I was on the edge of my seat. My heart race increased as scenes played out vividly as if I was there!

Bellamy is that girl on the run seeking refuge where she had her heart broken at BearPaw resort. Thinking it had been eight years since she last saw Liam, a professional snowboarder and Olympic medallist that she would be safe and could stay hidden, that is until they cross paths leaving her feeling exposed and unresolved feelings resurface between them, leading to a second chance at love with Liam intent on not letting her get away. I loved Liam’s character he was so sweet, protective, thoughtful, sexy and possessive. The snowboarding action from him was a plus!

I have to say I was totally invested in this story from reading the blurb to the opening pages. Once Bellamy and Liam see each other the elements of suspense and second chance just flowed with excitement and sexual tension. Charlie the dog and the backdrop of the winter resort just gave this book such a different vibe to it that I absolutely loved it!

The only thing I didn’t like was ugh the name Bellamy for a female heroine, I just kept thinking of it as a male name. I also thought this was a standalone book for this couple, so when the book kind of ended like a cliff-hanger I was left confused and desperate for more. Having said that I am still going to one click the next book if this is a series, and oh yeah I can't forget Alex who totally needs his own book because he was hilarious, and I loved the banter and bond he had with Liam!
Read more
Report abuse

Twinmum66
5.0 out of 5 stars if you like Snow, big soft, cuddly, dogs, roaring fires and hot chocolate and second chances youl love this.
Reviewed in the United Kingdom on April 10, 2018
Verified Purchase
Ive read everything Cambria Herbert has written and loved every single word, she can write about most things and has, one thing she always gets the same reaction from me though is i always love the characters she writes about but not just the leading ones, she has a great ability to really bring out the true, real, and rawness of each one. what i especially liked about this second chance romance was they didnt faff about till the end of the book wasting time and energy, they got it sorted straight away, and i loved that, to many times ive read books and its taken 90% of the book to get their acts together and then its over for u, i always feel like im left wondering, but not with this one nope,they sorted their selves out so now you can focus properly on their story as it unfolds without thinking oh come on or will they wont they, dont get me wrong i like that but this was a nice change for me. I like Liam for his honesty, there is no confusion with him, he kind of says it like it is and leaves it at that, how he is very protective of Bellamy and not once did he hesitate to step in and help from the minute he first laid eyes on her again. Bellamy tugged at my heart a little, but is she a survivor or what, i dont think she actually realises just how much inner strength she has. Aaaaannnnd lets not forget Charlie :). cant wait for the next one. id like to say i liked the cover photo when i first saw it but after reading the book i love it it fits so well, but i do find Cambria tends to get her cover photos just right any way.
Read more
One person found this helpful
Report abuse

Ally's Book Blog
5.0 out of 5 stars Unputdownable
Reviewed in the United Kingdom on April 2, 2018
Verified Purchase
Wow. I picked this book up and once I started it didnt leave my hands until I turned the last page. I was absolutely sucked into Bellamy and Liam's story.

Packed with suspense and a heartwarming love that could melt snow. It was an exciting read thats for sure! I was on the edge of my seat the whole way through, the chilling atmosphere and setting sent shivers down my spine and I was biting my nails just waiting for the penny to drop.

I read the opening chapter and that was it, I had to know what would happen next. I loved the characters, the history between them shaping the story and their feelings. It was tender and terrifying at the same time, the uncertainty and underlying threat.

Bellamy, broken, isolated and shrouded in fear, always looking over her shoulder.

Liam, charming, kind, and protective like a warm blanket on a cold day.

Rach H
4.0 out of 5 stars Great first book, looking forward to reading the series
Reviewed in the United Kingdom on April 22, 2019
Verified Purchase
My first book by this author & as soon as I read the prologue I knew it was going to be good.

Kept me gripped all the way through & I read it in one day. This book has everything - suspense, intrigue & some steaming hot sex.

anita bertola
5.0 out of 5 stars Brilliant
Reviewed in the United Kingdom on October 18, 2021
Verified Purchase
What a great read, good story line absolutely loved the characters. Need more of these guys. Can’t wait to read the next.
Read more
Report abuse
See all reviews
Back to top
Get to Know Us
Make Money with Us
Amazon Payment Products
Let Us Help You
EnglishChoose a language for shopping. CanadaChoose a country/region for shopping.
© 2008-2021, Amazon.com, Inc. or its affiliates