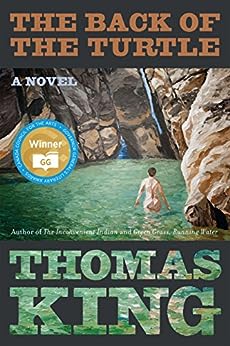 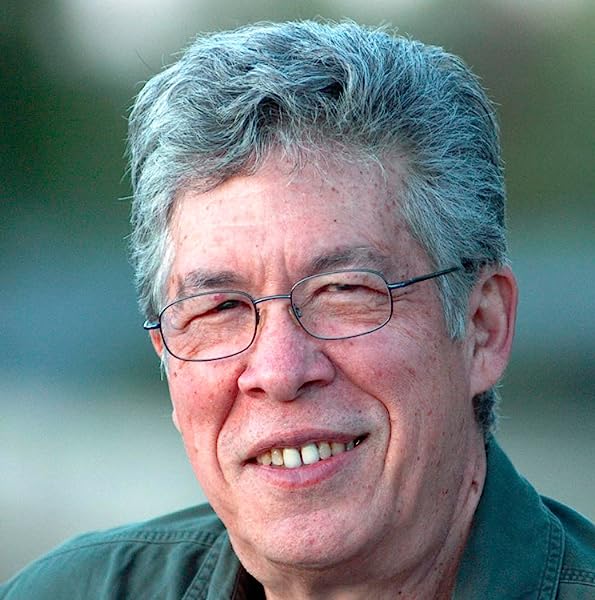 The Back Of The Turtle: A Novel Kindle Edition

by Thomas King (Author) Format: Kindle Edition
See all formats and editions
Sorry, there was a problem loading this page. Try again.

In The Back of the Turtle, Gabriel returns to Smoke River, the reserve where his mother grew up and to which she returned with Gabriel’s sister. The reserve is deserted after an environmental disaster killed the population, including Gabriel’s family, and the wildlife. Gabriel, a brilliant scientist working for DowSanto, created GreenSweep, and indirectly led to the crisis. Now he has come to see the damage and to kill himself in the sea. But as he prepares to let the water take him, he sees a young girl in the waves. Plunging in, he saves her, and soon is saving others. Who are these people with their long black hair and almond eyes who have fallen from the sky?

Filled with brilliant characters, trademark wit, wordplay and a thorough knowledge of native myth and story-telling, this novel is a masterpiece by one of our most important writers.

“Gracefully written, this is a fable-like morality tale. With King’s trademark flashes of humour, irony and deadpan delivery, The Back of the Turtle is populated with wounded characters who are trying to heal in the wake of an environmental disaster.” (Toronto Star)^“King’s writing is sharp, the characters are well-drawn, and his topic is suitably grave.” (National Post) --This text refers to the hardcover edition.

Thomas King is an award-winning novelist, short story writer, scriptwriter and photographer of Cherokee and Greek descent. His acclaimed, bestselling fiction includes Medicine River; Truth and Bright Water; One Good Story, That One; and A Short History of Indians in Canada. In addition to its many award distinctions, Green Grass, Running Water was named to Quill & Quire’s Best Canadian Fiction of the Century list. A member of the Order of Canada and the recipient of an award from the National Aboriginal Foundation, Thomas King is a professor of English at the University of Guelph, Ontario.

Thomas King is an award-winning novelist, short story writer, scriptwriter, and photographer. His many books include the novels Medicine River; Green Grass, Running Water; Truth and Bright Water; two short story collections, One Good Story, That One (Minnesota, 2013) and A Short History of Indians in Canada (Minnesota, 2013); nonfiction, The Truth About Stories (Minnesota, 2005); and the children's books A Coyote Columbus Story, Coyote Sings to the Moon, Coyote's New Suit, and A Coyote Solstice Tale. King edited the literary anthology All My Relations and wrote and starred in the popular CBC radio series, The Dead Dog Café. He is the recipient of a Lifetime Achievement Award (2003), and was made a member of the Order of Canada in 2004. He has taught Native literature and history and creative writing at the University of Lethbridge, the University of Minnesota, and the University of Guelph and is now retired and lives in Guelph, Ontario.

4.6 out of 5 stars
4.6 out of 5
128 global ratings
How are ratings calculated?
To calculate the overall star rating and percentage breakdown by star, we don’t use a simple average. Instead, our system considers things like how recent a review is and if the reviewer bought the item on Amazon. It also analyzes reviews to verify trustworthiness.

Bob
5.0 out of 5 stars King does not disappoint . . .
Reviewed in Canada 🇨🇦 on September 14, 2022
Verified Purchase
Thomas King again writes with his masterful stroke of wry humour while offering up a cast of wonderful, well-defined, and interesting characters. Gabriel and Mara, Crisp and Sonny, Dorian and, yes, even Winter, are blended into a tale that is most certainly entertaining, but in a larger sense it is an exploration of how people deal with those closely-related concepts of morals and ethics. It is overall a story about coming home and finding forgiveness; the forgiving of oneself and the gift of forgiveness by others.
I read this book first for enjoyment, but soon returned to, this second time, gain a deeper, clearer understanding of the message King has so craftily laid before the reader. It is not a hidden message, but one quite boldly presented, and how it is perceived (and received) by the reader will be individually determined.
Read more
Helpful
Report abuse

Carolyn
4.0 out of 5 stars I very much liked the beginning and the conclusion
Reviewed in Canada 🇨🇦 on December 17, 2014
Verified Purchase
3.5 stars
I would probably rate the book higher if I were to reread it. I very much liked the beginning and the conclusion, but got bogged down and bored at times. Now that I understand how everything fits together I would rate it higher in retrospect.
The book starts with despair, chronicles a dreadful environmental and human disaster, and ends with a glimmer of hope.
We meet Gabriel while he is waiting for the tide to sweep him out to sea to his death. He plays the drum and sings while awaiting his suicide. It is interrupted when he sees a girl with almond shaped eyes and long black hair who appears to be drowning. She must have fallen from the sky into the sea. This resembles Native creation folk lore about a woman who fell from the sky. Gabriel rescues her and then others appear thrashing in the water. He struggles to save them, and exhausted discovers they have all vanished. Magic realism or something else?
The tide is now wrong for his suicide, so he must wait. We learn that Gabriel was a brilliant scientist who developed a defoliant called Green Sweep. This was used by a company called Domidon to remove vegetation around a pipeline, and was never approved for use. Gabriel has come to the town of Samaritan Bay on the BC coast.
This town was a popular tourist destination where people flocked to see the annual hatching of the baby turtles and their journey to the sea. Then came the 'Ruin' when the rivers and sea became poisoned, destroying the turtle nesting ground, fish, animals and sea birds. Stores and other businesses shut down. A nearby Native Reservation was horribly affected. Many died and the survivors were moved away. Gabriel's mother and sister were among those who died.
Gabriel feels guilty and depressed. He decides to visit the few people who remain in the town while he awaits suicide. We and Gabriel meet Sonny, a sweet young boy, who may be intellectually challenged, psychotic, or both. Sonny lives in the vacant motel and spends time scavenging on the beach and tapping with a hammer. There is Crisp, an eccentric, older man who spends time soaking in the hot pools. His way of expressing himself is lyrical and one of the most entertaining part of the book. Mara, a native woman, has returned to the reservation from Toronto where she was an artist. Her mother and grandmother died when the reservation was poisoned. There is also Soldier, a dog, who attaches himself to each character.
The story shifts to Darian, the CEO of Domidon in Toronto. He seems to care little for the environmental damage and human deaths caused. He is scrambling and scheming to do damage control through lies while twisting and minimizing the facts. He combats stress by daily purchasing extravagant goods and services or thinking what to buy next.
As Sonny, Mara, Crisp and Gabriel interact the story heads to an interesting and exciting climax. Gabriel is again sitting on a ledge waiting for the tide to sweep him away. The ending was unexpected as we learn the reason for the interruption of his previous suicide attempt at the start of the book. There are hopeful signs pointing to the future rebirth of Samaritan Bay.
Read more
10 people found this helpful
Helpful
Report abuse

Kathy G. Arnason
5.0 out of 5 stars Buy it you will thank yourself
Reviewed in Canada 🇨🇦 on September 18, 2021
Verified Purchase
A book you will remember the rest of your life - amazing characters!
Read more
Helpful
Report abuse

Madeline
3.0 out of 5 stars Average...not up to his others.
Reviewed in Canada 🇨🇦 on January 6, 2021
Verified Purchase
Too confusing...not as much fun as INDIANS ON VACATION
Read more
Helpful
Report abuse

Wendy L. Francis
4.0 out of 5 stars Funny, sad and hopeful
Reviewed in Canada 🇨🇦 on March 22, 2015
Verified Purchase
Thomas King is a wonderful writer. This book is full of colourful characters and clever cultural references (e.g., "we don't need no stinking badges") set against the backdrop of an environmental catastrophe that devastated a coastal community. As the remaining residents try to make sense of what happened they help each other to heal with a tremendous generosity. The ocean forms the backdrop for most of the action and almost is a a character itself. I found this to be a thoroughly enjoyable and satisfactory read.
Read more
2 people found this helpful
Helpful
Report abuse

Todd Hanson
4.0 out of 5 stars great for fans of Doctor Who
Reviewed in Canada 🇨🇦 on March 24, 2016
Verified Purchase
It didn't occur to me until the climactic scene at the end that this could easily serve as a Doctor Who series with very few alterations. It even has a role for K-9. Fantastic!
Read more
Helpful
Report abuse

Tom S.
5.0 out of 5 stars Great read, couldn't put it down.
Reviewed in Canada 🇨🇦 on March 8, 2016
Verified Purchase
Being Canadian and living in BC, with companies wanting to build & install pipelines to remote towns along the coast, extract natural gas in BC and pipe it as well, this story comes very close to home. Very the characters, the storyline and the whole quirky personality of the book. Great read.
Read more
2 people found this helpful
Helpful
Report abuse
See all reviews

witz
5.0 out of 5 stars A Tom King book. Good, of course.
Reviewed in the United States 🇺🇸 on September 19, 2019
Verified Purchase
King writes engagingly about Indians, mostly Canadian ones, trying to live in the traditional and modern worlds, both at once. My favorite is Green Grass, Running Water. This one was a long time coming, and worth the wait.
Read more
Report abuse

LyndaT
4.0 out of 5 stars And for something completely different, I would highly recommend The Back of the Turtle
Reviewed in the United States 🇺🇸 on May 7, 2015
Verified Purchase
This is a fascinating book that I thoroughly enjoyed reading, which came as a surprise to me as the magic realism/aboriginal/science fiction undertones are not generally my preferred genre. The characters are multi-dimensional and I was eager to learn more about them as I read the book. The book is a very fast read and the story was original and highly topical.
Read more
2 people found this helpful
Report abuse

John J. N. Murray
5.0 out of 5 stars Five Stars
Reviewed in the United States 🇺🇸 on May 7, 2016
Verified Purchase
Loved the book Was for our bookclub
Read more
Report abuse

clarice steers
5.0 out of 5 stars Good read!
Reviewed in the United States 🇺🇸 on March 15, 2015
Verified Purchase
Fascinating story with vivid images. The CEO character is over the top and not quite believeable and certainly not likable. The reference to other environmental disasters reminds us of our short memories concerning catastrophes that do not involve us directly. Good read!
Read more
Report abuse