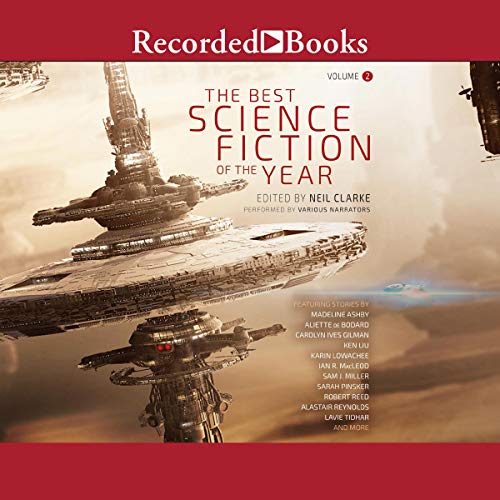 The Best Science Fiction of the Year, Volume 2

First contact with a mysterious race of aliens reveals an unusual request; a family's pet dog comes to grips with the newly bestowed gift of human-like intelligence; a poet, in danger and alone on a distant world, makes unlikely allies; hundreds of years in the future, a famous hermit lives in the sea above the now-underwater Harvard University; former friends navigate unsteady peace between human refugees and the technologically superior race that saved them; in a future where human life can be infinitely extended through cybertronic rebirth, one woman declines immortality.

For decades, science fiction has compelled us to imagine futures both inspiring and cautionary. Whether it's a warning message from a survey ship, a harrowing journey to a new world, or the adventures of well-meaning AI, science fiction inspires the imagination and delivers a lens through which we can view ourselves and the world around us.

With The Best Science Fiction of the Year: Volume Two, award-winning editor Neil Clarke provides a year-in-review and 27 of the best stories published by both new and established authors in 2016.

"The Visitor from Taured" by Ian R. MacLeod (Asimov's, September 2016)

"Ten Days" by Nina Allan (Now We Are Ten, edited by Ian Whates)

"They All Have One Breath" by Karl Bunker (Asimov's, December 2016)

"Sooner or Later Everything Falls Into the Sea" by Sarah Pinsker (Lightspeed, February 2016)

"And Then, One Day, the Air was Full of Voices" by Margaret Ronald (Clarkesworld, June 2016)

"The Charge and the Storm" by An Owomoyela (Asimov's, February 2016)

"Ten Poems for the Mossums, One for the Man" by Suzanne Palmer (Asimov's, July 2016)

"Dispatches from the Cradle: The Hermit-Forty-Eight Hours in the Sea of Massachusetts" by Ken Liu (Drowned Worlds, edited by Jonathana Strahan)

"Touring with the Alien" by Carolyn Ives Gilman (Clarkesworld, April 2016)

Get 3 months of Audible for only $5.95/mo!
You get 3 credits and unlimited access to podcasts, originals and more.
Limited time offer! Get started
Learn more about membership
List Price: $52.62
You Save: $6.58 (13%)
By completing your purchase, you agree to Audible's Conditions Of Use and Amazon's Privacy Notice. Tax where applicable.
Sold and delivered by Audible, an Amazon company
Share

4.2 out of 5 stars
4.2 out of 5
65 global ratings
How are ratings calculated?
To calculate the overall star rating and percentage breakdown by star, we don’t use a simple average. Instead, our system considers things like how recent a review is and if the reviewer bought the item on Amazon. It also analyzes reviews to verify trustworthiness.

Doug Fowler
4.0 out of 5 stars Consistent series
Reviewed in the United Kingdom 🇬🇧 on June 18, 2019
Verified Purchase
Some of the stories are extremely weak (admittedly I am a space opera fan) and are more on the fantasy spectrum. Still, quite good.
Read more
Report abuse

Perceptive Reader
3.0 out of 5 stars Mixed Bag, with some Good Stories
Reviewed in India 🇮🇳 on May 3, 2021
Verified Purchase
This was one a very large but very unevenly mixed bag. My favourites were:
1. Extraction Request— Rich Larson;
2. Last Gods— Sam J. Miller;
3. Night Journey of the Dragon-Horse— Xia Jia;
4. Pearl— Aliette de Bodard;
5. The Iron Tactician— Alastair Reynolds;
6. Sooner or Later Everything Falls Into the Sea— Sarah Pinsker;
7. And Then, One Day, the Air was Full of Voices— Margaret Ronald;
8. Number Nine Moon— Alex Irvine;
9. Dispatches from the Cradle: The Hermit—Forty-Eight Hours in the Sea of Massachusetts— Ken Liu;
10. Touring with the Alien— Carolyn Ives Gilman.
There were too many overlong works which seemed to have forgotten plot and dialogues while trying to emphasise ideas. Nevertheless, if you are in the mood of spending a lot of time with sff, then this massive anthology would be a good choice.
Read more
Report abuse