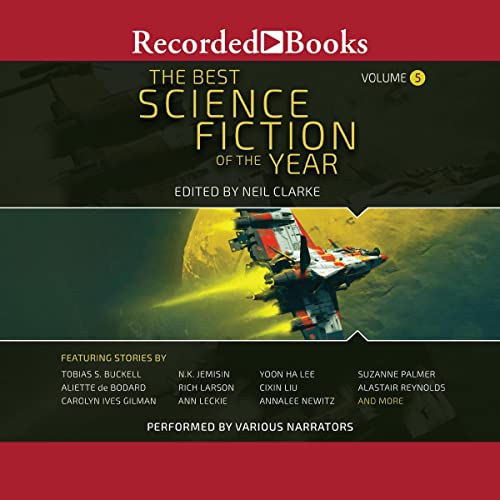 The Best Science Fiction of the Year, Volume 5

A colony survives among the icy rings of a planet, hiding from alien robots determined to destroy them … at a remote site on the edge of the Arctic Circle, a group of scientists, engineers, and physicians gather to gamble humanity’s future on one last-ditch experiment … a man who can’t feel pain has been bioengineered to be a killing machine, but he refuses to give in to his fate … a man is contacted by three future versions of himself, each trying to save their world from destruction.

For decades, science fiction has compelled us to imagine futures both inspiring and cautionary. Whether it’s a warning message from a survey ship, a harrowing journey to a new world, or the adventures of well-meaning AI, science fiction inspires the imagination and delivers a lens through which we can view ourselves and the world around us. With The Best Science Fiction of the Year: Volume Five, award-winning editor Neil Clarke provides a year-in-review and twenty-eight of the best stories published by both new and established authors in 2019.

Our best offer yet
Get 3 months free!
Limited time offer. Get started
Learn more about membership
List Price: $52.62
You Save: $6.58 (13%)
By completing your purchase, you agree to Audible's Conditions Of Use and Amazon's Privacy Notice. Tax where applicable.
Sold and delivered by Audible, an Amazon company
Share

4.3 out of 5 stars
4.3 out of 5
144 global ratings
How are ratings calculated?
To calculate the overall star rating and percentage breakdown by star, we don’t use a simple average. Instead, our system considers things like how recent a review is and if the reviewer bought the item on Amazon. It also analyzes reviews to verify trustworthiness.
Top reviews

Mr. Robert A. Low
4.0 out of 5 stars Diversity Reversal
Reviewed in the United Kingdom on June 19, 2021
Verified Purchase
The late Gardner Dozois' annual Year's Best Science Fiction collection was one of my essential purchases. Over the last few years a number of alternative year's best collections have started appearing - some including fantasy as well as sf -and as Neil Clarke's is one of the most well established, I thought I would see if if it could be a worthy substitute for Dozois' annual collection; not that anyone could replace Dozois, who is one of the all time great genre editors, and was a pretty good writer himself at one time.

Clarke's collection, while not quite as vast as the Dozois' annuals, still offers pretty good value for money. There are 28 stories collected, one a novella of over ninety pages. This is also the first sf anthology I've come across for a while where the majority of contributors are women. The quality of writing is very high overall, even in some of the stories that didn't quite work, and the aforesaid novella - Alastair Reynold's brilliant 'Permafrost' - is worth the price of admission on its own. The translated stories by Chinese writers are also excellent, particularly Cixin Liu's 'Moonlight', an ingenious time travelling take on the famous fable 'Appointment in Samara'. There are some issues with the book, however, that mean that I'm still considering whether this is an anthology series I will commit to buying regularly.

Almost all of the stories in this book deal with the collapse of our environment. While an undeniably crucial issue to the survival of our planet and species, this is supposed to be 'fiction', and the destruction of the environment is actually happening. As none of the stories offer much in the way of constructive, viable suggestions as to how to rectify things, or have anything particularly original to say about the subject, this can become wearing after a while - and then there's the politics.

At least one other reviewer has attacked this book because of the 'woke' politics of the stories. I have no problem with politically engaged genre fiction. SF, fantasy and horror are actually ideal for political comment and satire because they deal in exaggeration. The problem here is that the perspective and world view of all of these writers is virtually identical , and none of their political points are made with anything even remotely approaching subtlety. The cumulative impression of reading so many stories written from exactly the same political viewpoint consecutively is not one of an encounter with 'diversity', rather the complete opposite. In fact, it's more like stumbling across a cache of campaign literature from some student political society.

As a result, some of the bad stories in this book - and every anthology is bound to have one or two - are very bad indeed. Elizabeth Bear's pronoun apocalypse 'Deriving Life' is practically unreadable. Rebecca Wallace's 'Such Thoughts Are Unproductive' - which posits the possibility that, in the near future, the white, heteronormative, military-industrial patriarchy will start 'disappearing' people with opinions different from their own - is a particularly bizarre exercise in projection, bearing in mind that it is currently those who consider themselves to be 'progressives' who are most likely to try and make their political opponent's 'disappear' via cancellation and 'no-platforming'.

On the whole the quality of the writing, and the fact that the best stories in this book are excellent , mean that I couldn't in all fairness give it less than four stars. As well as the Reynolds, there are also first rate stories by Mercuria Rivera, Tegan Moore, and A. T. Greenblatt, and the good stories far outnumber the stinkers. However, I am still pondering whether this is going to be my new annual purchase.
Read more
3 people found this helpful
Report abuse

Douglas Clark
5.0 out of 5 stars A good substitute for the Gardener Dozois edited books.
Reviewed in the United Kingdom on January 11, 2021
Verified Purchase
I enjoyed most of the selection of stories in this anthology Of course, not everyone will be to every reader's taste but the overall quality was high and the proportion I was not grabbed by was low. I can recommend the Kindle edition in which I have not noticed any glaring errors. I used to buy the annual anthology edited by GD and I think that I will now buy this one each year. I was really quite disappointed when the publication got delayed by Covid.
Read more
Report abuse

Denis
3.0 out of 5 stars Weird, not intriguing
Reviewed in France on October 11, 2021
Verified Purchase
A collection of short stories, some well known names, many not so. Rather dark stories, often merely weird, but not intriguing. I can't recommend it unless you're into the darker side of sci-fi.
Read more
Report abuse

Solid Scot
1.0 out of 5 stars Don't waste your money
Reviewed in the United States on February 24, 2021
Verified Purchase
Despite all of the accolades and "prestige" that Clarke panders to, this collection is a steaming pile of horse pucky. If you're into gender dysphoria, dangling plots, pandering to foreign writers who really aren't all that good, or plots set in exotic locals that still fall flatter than a pancake, then this collection is for you. The state of SF in general is crap because room is made to promote social justice issues over good writing. In short, the Disney effect. Just pass. Clarke has zero clue as to what good fiction. About two of the stories in this collection are any good, but that hardly makes it worth the cost. The world of SF is definitely declining, but it's not due to a lack of good writers, rather an industry that panders to this garbage....
Read more
28 people found this helpful
Report abuse

Margaret
2.0 out of 5 stars A Real Disappointment For Gardner Dozois Fans
Reviewed in the United States on February 24, 2021
Verified Purchase
For those who were hoping that Neil Clarke's "Best Science Fiction" series would manage to fill the void left by Gardner Dozois' passing, this is a reminder of what we once had.

There are perhaps a tiny handful of enjoyable stories in this entire volume; The Work Of Wolves, and In The Stillness Between Stars stand out, but sadly, so many others are trite exercises in social consciousness, lacking in both subtlety and style. And endings. How is it possible to have some many stories with astonishingly weak endings?

It's difficult to believe that there weren't better examples of good speculative fiction to have chosen, because these are enough to make one give up on the genre.
Read more
18 people found this helpful
Report abuse
See all reviews