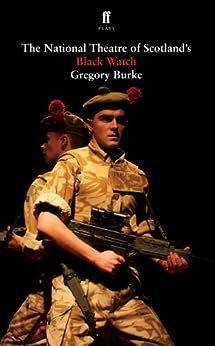 This book contains Gregory Burke's award-winning text, with production notes by the director John Tiffany and colour photographs that capture the powerful and inventive use of movement in this visceral, complex and urgent piece of theatre.

The National Theatre of Scotland's production of Black Watch opened at the Edinburgh Festival Fringe in 2006 where it won a Herald Angel, a Scotsman Fringe First, a Best Theatre Writing Award from The List, a Stage Award for Best Ensemble, the Critics' Circle Award and the South Bank Show Award for Theatre. In 2007 it began a world tour in Scotland.

"A magnificent piece of social and political theatre. A high point not just of the festival but of the theatrical year" Observer

4.4 out of 5 stars
4.4 out of 5
57 global ratings
How are ratings calculated?
To calculate the overall star rating and percentage breakdown by star, we don’t use a simple average. Instead, our system considers things like how recent a review is and if the reviewer bought the item on Amazon. It also analyzes reviews to verify trustworthiness.

Chiara
5.0 out of 5 stars They Don't Fight For The Reasons You're Thinking
Reviewed in Canada 🇨🇦 on November 17, 2014
Verified Purchase
This play takes a very interesting look at the war in Iraq and how the soldiers in the front lines feel about being there. I thought it was very powerful at the end when the soldiers tell you why they go to fight and how it is so different from what we think they fight for. Very beautifully written play really makes you think. I loved it.
Read more
Helpful
Report abuse
See all reviews

chajo
5.0 out of 5 stars Script
Reviewed in the United Kingdom 🇬🇧 on October 7, 2013
Verified Purchase
This is the best play I have ever read and one I would recommend to others. It came in good time and was well worth ordering. Gregory Burke is an excellent playwright
Read more
2 people found this helpful
Report abuse

Lars P. Hanson
5.0 out of 5 stars Full text
Reviewed in the United States 🇺🇸 on March 22, 2018
Verified Purchase
This is the full text of the Scottish National Theater production of “Black Watch.” The play itself captures the tensions and intensity of the wars in Iraq and Afghanistan as best as a play can do for audiences who have not experienced those wars. It also captures the frustrations and feelings those who have been in Afghanistan and Iraq bring home with them.

Well worth seeing if the show comes your way. Simply reading the play pales by comparison, but it is a start. In reading the play, recommended reading it aloud and listening to the emotions and thoughts being expressed.

There is a lot to think about in this work.
Read more
Report abuse

Guido
5.0 out of 5 stars Historical Theater
Reviewed in the United States 🇺🇸 on March 4, 2020
Verified Purchase
This is a magnificent script of the original BLACK WATCH production produced by the National Theater of Scotland and directed by the great John Tiffany. Follow the production on YouTube as your follow the script. This is what great theater is all about.
Read more
Report abuse
See all reviews
Report an issue
Does this item contain inappropriate content?
Report
Do you believe that this item violates a copyright?
Report
Does this item contain quality or formatting issues?
Report