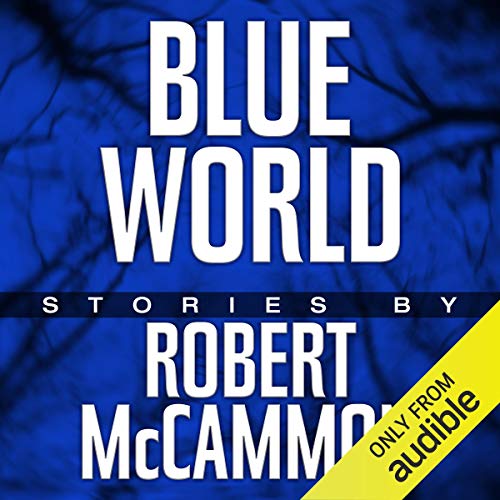 A novella and 12 stories from a master of supernatural horror.

Father John has lived his whole life without knowing a woman's touch. Hard at first, his self-denial grew easier over time, as he learned to master his urges with a regimen of prayer, cold showers, and jigsaw puzzles. That changes the day that Debra Rocks enters his confessional. A rough-talking adult film actress, she has come to ask him to pray for a murdered costar. Her cinnamon perfume infects Father John, and after she departs he becomes obsessed. Around the corner from his church is a neon-lit alley of sin. He goes there hoping to save her life before he damns himself.

That is Blue World, the novella that anchors this collection of chilling stories by Robert R. McCammon. Although monsters, demons, and murderers fill this audio, in McCammon's world the most terrifying landscape of all is the barren wasteland of a lost man's soul.

4.3 out of 5 stars
4.3 out of 5
267 global ratings
How are ratings calculated?
To calculate the overall star rating and percentage breakdown by star, we don’t use a simple average. Instead, our system considers things like how recent a review is and if the reviewer bought the item on Amazon. It also analyzes reviews to verify trustworthiness.

Amazon Customer
4.0 out of 5 stars Four Stars
Reviewed in Canada 🇨🇦 on May 8, 2016
Verified Purchase
its a book
Read more
Helpful
Report abuse

lawyeraau
4.0 out of 5 stars A WORLD BEYOND IMAGINATION...
Reviewed in Canada 🇨🇦 on August 5, 2013
This is an entertaining and skillfully written collection of twelve short stories and one novella from a master of horror. They range in quality from very good to simply amazing. Those who are fans of the horror genre will delight in these highly imaginative and creepy stories, some of which are downright scary! ). There is definitely something for everyone in this collection, where the mundane is elevated to a sublime level of horror.

My special favorites are "Yellowjacket Summer" (a wrong turn off a highway), "I Scream Man!" (a special game of scrabble), "He'll Come Knocking at Your Door" (a frightening Halloween in a small town), "Chico" (an idiot savant with a special gift), "The Red House" (the significance of being different), and "Something Passed By" (the end of the world as we know it). So, if horror is your genre, do not pass up this collection of artfully crafted stories.
Read more
One person found this helpful
Helpful
Report abuse

Jeffrey Swystun
VINE VOICE
3.0 out of 5 stars Hits and Misses
Reviewed in Canada 🇨🇦 on November 24, 2012
McCammon has a rich imagination whose talent is commensurate with King, Koontz and other contemporaries. Unfortunately there were only a few entries in this collection that were entertaining and of quality. The novella "Blue World" that takes up half the space was a bit slow and too sweet for my taste. The standout stories were "Nightcrawlers" because anything with a Vietnam vet that was the victim of an Agent Orange-type chemical is worth it. "Night Calls the Green Falcon" is cool nostalgia and "Yellowjacket Summer" read like a collaboration with Stephen King. "He'll Come Knocking at Your Door" took some inspiration from Jackson's "The Lottery". "Something Passed By" was the most inventive where McCammon creates an overwhelming post-apocalyptic world demonstrating his vivid imagination.
Read more
Helpful
Report abuse

Darren Jacks
5.0 out of 5 stars McCammon at his best...
Reviewed in Canada 🇨🇦 on August 21, 2002
Robert McCammon burst onto the horror scene like a lightning bolt and scared the [heck] out of many jaded horror fans. He was like King and Straub combined. He was a master storyteller and amazed many that read him for the first time. However, when he tried to cross over and write mainstream fiction, he was rejected. So he retired; however rumor is he has been accepted and is on the comeback trail with mainstream fiction. Gone South and Mine are perfect examples he can succeed.
Blue World is short stuff at it's best. McCammon pulls no punches and is quite adept at pulling off some chills and thrills in the short form. Here are some worthy mentions of kudos.
"Makeup" is about a small-time thief who breaks into a museum and steals the wrong thing. He steals a makeup bag by a B-movie horror actor. His contact refuses to pay anything for it and the hoodlum tries the makeup on, to hilarious results.
"I Scream Man" is chilling and very good.
"Something Passed By" is an end of the world type doomsday short that is very entertaining and thought-provoking. It is one of McCammon's best.
"Blue World", the title, is about 175 pages of detailed description of a priest in distress about his obsession with a porn star. It is a very easy read; entertaining and thought-provoking about the things a priest must go through to test his faith. McCammon must have researched the adult industry becuase it is a very good accounting. This is just a great novella.
And as usual, you will have fun with anything McCammon writes. Let us hope he is coming back to the fold soon.
Read more
Helpful
Report abuse

Daniel Llinas
4.0 out of 5 stars A Shame McCammon is no Longer Writing...
Reviewed in Canada 🇨🇦 on March 23, 2001
It is a shame that Robert R. McCammon has stopped publishing his work, and this book is a great example why.
The highlight of the book was the first story, "Yellowjacket Summer." This story starts in a small town. Everything seems hunky dory. A kid who works at a gas station is talking to the owner about baseball...just a good old American day. Then a van arrives, running out of gas, and discover everything in the town is not as normal as it seems.
Another highlight was the Green Falcon story, where a retired actor decides to take care of the bad guys himself by donning his old super-hero uniform. The title story, Blue World, puts us right in the middle of a priest's struggle with his faith manifested in his obsession with a porn star.
All of the stories in this book were enjoyable, but these just stood out for me. In my view, McCammon is second only to Stephen King in the horror field, so if you like short horror fiction, this is definitely the book for your.
Oh, and if you're wondering why McCammon isn't publishing his work anymore, it's because he wanted to branch out into other genres (namely, into mainstream fiction) but his publishers put constant pressure on him to write horror.
Read more
One person found this helpful
Helpful
Report abuse
See all reviews

Kindle Customer
2.0 out of 5 stars Please don't let this be the 1st R McCammon book you read.
Reviewed in the United States 🇺🇸 on August 4, 2017
Verified Purchase
McCammon is one of my top five favorite authors. He can simply and quickly pull a reader into the world he's created with his novels. Swan Song, Boys Life, The Wolfs Hour and almost all of his Matthew Corbett series books are just wonderful reads. In fact I've read many of them more than once. However this collection of stories fell far far short of his usual high standards. I would not at all be surprised to learn that most of these stories were written by a very very young and inexperienced McCammon. I typically prefer a lengthy novel and that may be part of my issue with this collection but it's certainly not my only one. To be completely honest I was just bored with most of the book. I twice put it down and vowed not to finish. That's a BIG deal with me too. I'm 51 years old, been an avid reader since I was 12 and have only contemplated not finishing a book probably less than five times. So please don't let this be the first book you read from this typically reliable author.
Read more
34 people found this helpful
Report abuse

Fred Forbes
4.0 out of 5 stars Powerful
Reviewed in the United States 🇺🇸 on January 6, 2021
Verified Purchase
It has been awhile since I have read anything by McGammon who I place in the category of King and Koontz as writers who can deal with the twisted while still maintaining a style and skill in writing that is phenomenal. Browsing in a used book store I came across this 30 year old short story collection that I was not aware of, although I had thoroughly enjoyed "Gone South" and "Boy's Life" which were excellent novels. This collection, like most, tends to vary in quality. Some are excellent and enjoyable, some are a bit off the wall. The writing, however, is always powerful, descriptive and deft. Special compliment to the novella with the book title. A Catholic priest falls in love with a porn star who is being stalked by a serial killer. Yeah, that could lead to some complications! Also first story I have encountered where someone keeps a large land crab as a pet. Very entertaining read!
Read more
2 people found this helpful
Report abuse

oswaldhiv
2.0 out of 5 stars Do not buy Kindle edition - riddled with typos
Reviewed in the United States 🇺🇸 on June 21, 2018
Verified Purchase
The short stories are not great, the novella is a little better. The Kindle edition has so many typos that I would not recommend purchasing it. Grab a copy for a few bucks used if you’re a McCammon completist.
Read more
17 people found this helpful
Report abuse
See all reviews