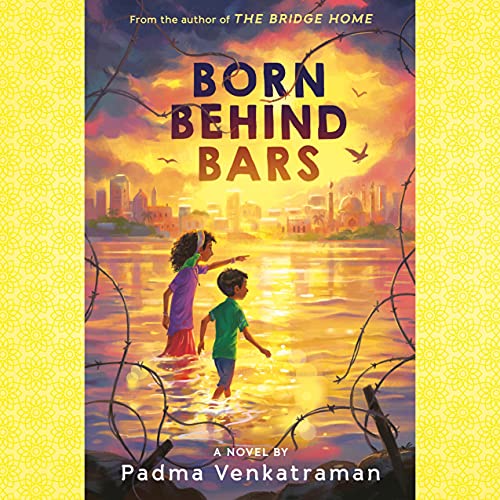 Padma Venkatraman (Author, Narrator), Listening Library (Publisher)
4.7 out of 5 stars 96 ratings
See all formats and editions
Sorry, there was a problem loading this page. Try again.

"Venkatraman has never met a heavy theme she did not like.... Borrowing elements of fable, it's told with a recurring sense of awe by a boy whom the world, for most of his life, has existed only in stories." (New York Times Book Review)

The author of the award-winning The Bridge Home brings listeners another gripping novel set in Chennai, India, featuring a boy who's unexpectedly released into the world after spending his whole life in jail with his mom.

Kabir has been in jail since the day he was born because his mom is serving time for a crime she didn't commit. He's never met his dad, so the only family he's got are their cellmates, and the only place he feels the least bit free is in the classroom, where his kind teacher regales him with stories of the wonders of the outside world. Then one day a new warden arrives and announces Kabir is too old to stay. He gets handed over to a long-lost "uncle" who unfortunately turns out to be a fraud and intends to sell Kabir. So Kabir does the only thing he can - run away as fast as his legs will take him. How does a boy with nowhere to go and no connections make his way? Fortunately, he befriends Rani, another street kid, and she takes him under her wing. But plotting their next move is hard - and fraught with danger - in a world that cares little for homeless, low-caste children. This is not the world Kabir dreamed of - but he's discovered he's not the type to give up. Kabir is ready to show the world that he - and his mother - deserve a place in it.

4.7 out of 5 stars
4.7 out of 5
96 global ratings
How are ratings calculated?
To calculate the overall star rating and percentage breakdown by star, we don’t use a simple average. Instead, our system considers things like how recent a review is and if the reviewer bought the item on Amazon. It also analyzes reviews to verify trustworthiness.

spring72
5.0 out of 5 stars Wonderful tale for young readers
Reviewed in the United States 🇺🇸 on July 21, 2022
Verified Purchase
This story is beautifully written and the structure is simple enough for a young reader to follow who is just starting chapter books. The story introduces the reader to modern day India where the flawed caste system exists. Kabir is set free from spending his entire life behind bars and he quickly learns about the unjust treatment of lower class citizens. The novel also shares the conflict between Hindus and Muslims. Kabir is a delightful lead character who readers will gladly cheer for from the beginning of the story to the end.
Read more
Report abuse

Joanne R. Fritz
5.0 out of 5 stars Stunningly gorgeous
Reviewed in the United States 🇺🇸 on November 2, 2021
Verified Purchase
A stunningly gorgeous novel about Kabir, a nine-year-old boy born while his mother is in prison in Chennai, India. When the new warden decides he's too old to still be living there, Kabir ends up living on the streets. The friendship between Kabir and an older Roma girl, Rani, is inspiring. The ending is heartwarming and beautiful.

I have read and loved everything Padma Venkatraman writes. May she continue to grace us with her talent!
Read more
Report abuse

Gomathy Naranan
5.0 out of 5 stars Heartwarming and relevant
Reviewed in the United States 🇺🇸 on September 26, 2021
Verified Purchase
Ms. Venkatraman has written a beautiful and relevant novel about the lives of brave young children struggling to find their way home. It was a page turner, and I found it moving and realistic, as it depicts the injustices of the criminal system, the longing for freedom and the determination in reaching that goal. The characters are portrayed with love and sensitivity, as they come to life, and I felt I was in their world and could see the world through their eyes. It is a wonderful read, for all ages!
Read more
One person found this helpful
Report abuse

Diane
5.0 out of 5 stars So good!
Reviewed in the United States 🇺🇸 on January 28, 2022
Verified Purchase
I read this book to my students and they begged for me to keep reading!
Read more
One person found this helpful
Report abuse

Ying Chen
5.0 out of 5 stars amazing
Reviewed in the United States 🇺🇸 on October 29, 2022
Verified Purchase
I love this book! I’m so glad Kabir and Amma got out of jail in the end! I definitely reccomend it to you to read.
Read more
Report abuse
See all reviews