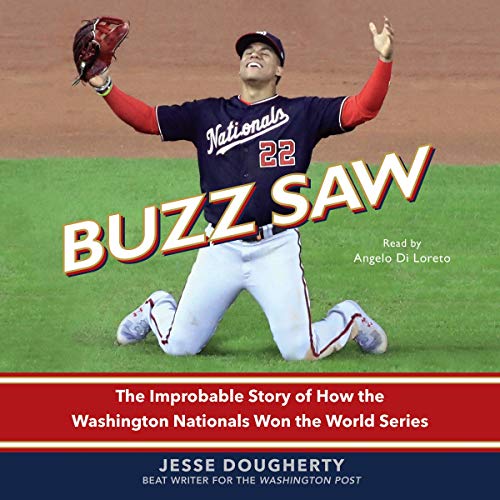 Buzz Saw: The Improbable Story of How the Washington Nationals Won the World Series

The remarkable story of the 2019 World Series champion Washington Nationals told by the Washington Post writer who followed the team most closely.

By May 2019, the Washington Nationals - owners of baseball’s oldest roster - had one of the worst records in the majors and just a 1.5 percent chance of winning the World Series. Yet by blending an old-school brand of baseball with modern analytics, they managed to sneak into the playoffs and put together the most unlikely postseason run in baseball history. Not only did they beat the Houston Astros, the team with the best regular-season record, to claim the franchise’s first championship - they won all four games in Houston, making them the first club to ever win four road games in a World Series.

"You have a great year, and you can run into a buzz saw," Nationals pitcher Stephen Strasburg told Washington Post beat writer Jesse Dougherty after the team advanced to the World Series. "Maybe this year we’re the buzz saw." Dougherty followed the Nationals more closely than any other writer in America, and in Buzz Saw he recounts the dramatic year in vivid detail, taking listeners inside the dugout, the clubhouse, the front office, and ultimately the championship parade.

Yet he does something more than provide a riveting retelling of the season: He makes the case that while there is indisputable value to Moneyball-style metrics, baseball isn’t just a numbers game. Intangibles like team chemistry, veteran experience, and childlike joy are equally essential to winning. Certainly, no team seemed to have more fun than the Nationals, who adopted the kids’ song "Baby Shark" as their anthem and regularly broke into dugout dance parties. Buzz Saw is just as lively and rollicking - a fitting tribute to one of the most exciting, inspiring teams to ever take the field.

Our best offer yet
Get 3 months free!
Limited time offer. Get started
Learn more about membership
List Price: $23.67
You Save: $2.96 (13%)
By completing your purchase, you agree to Audible's Conditions Of Use and Amazon's Privacy Notice. Tax where applicable.
Sold and delivered by Audible, an Amazon company
Share

4.7 out of 5 stars
4.7 out of 5
292 global ratings
How are ratings calculated?
To calculate the overall star rating and percentage breakdown by star, we don’t use a simple average. Instead, our system considers things like how recent a review is and if the reviewer bought the item on Amazon. It also analyzes reviews to verify trustworthiness.
Top reviews

Elma
5.0 out of 5 stars Every Nats fan needs this!
Reviewed in Canada on June 7, 2020
Verified Purchase
What an amazing book for any Nats fan! I devoured it. Excellent writing and it was great to read stories/events I had not heard of before (and I read everything about this team!). Great book.
Read more
Helpful
Report abuse

Matthew Mcgregor
5.0 out of 5 stars This is a great baseball book; it's the best Nationals book.
Reviewed in the United Kingdom on May 6, 2020
Verified Purchase
Any Nats fan is going to enjoy any book about the 2019 season, but this goes above and beyond. I often don't love sports books all that much but this one is beautifully written, keeps the twee metaphors and cliches absent, and gives a fast-paced and absorbing recap of what happened. Along the way, the events of the season are used to give short and engaging pen-portraits of the key people. This is a good one for any baseball fan, but for any Nationals fan it is perfection.
Read more
Report abuse

Customer
3.0 out of 5 stars Good Story, Torturous Text
Reviewed in the United States on April 7, 2020
Verified Purchase
My wife and I have been partial season ticket holders with the Nationals since 2005, and I bought this book after reading a very positive review in the local newspaper. While the overall story is a good one, I had difficulty with the continuity, flow, and sentence/paragraph structure of the book. I thought the chapters about the players, the advance scouts, Davey Martinez, and Mike Rizzo that were introduced throughout the book were a plus, but the flow of the description of the overall season was very choppy and seemed to omit significant elements of the story. For example, quite a bit of space was dedicated to the abysmal start to the season, but the turn-around and the climb to the wild card at the end was not covered nearly as well. Often within a given page or paragraph I found discontinuities and sentences that seemed to be out of context or missing. As an example on page 31 a sentence talking about taking the train to Philadelphia was followed immediately by one about splitting a series with the Mets with no logical connection between the two leaving one to wonder what happened in Philadelphia. It was often difficult to follow a timeline because of issues similar to this. I also found a number of apparent typographical or spelling errors,e. g., route for rout. All these issues made the book more difficult to read, often requiring me to reread paragraphs or pages to understand what was being said and how events connected. It almost seems as if the book was too lengthy, when it was given to the editors, and they abridged it without sufficient attention to the details or flow. I read the author's baseball columns in the newspaper, and he is a very good sportswriter; therefore, I am wondering whether my issues were the result of poor editing. Having said all of this, it is a book worth reading, if you have any interest in the Nationals. It provides some good insight into many of the team personalities and has made me appreciate some of them more as individuals. I just wish it was not such a tortuous read.
Read more
19 people found this helpful
Report abuse

Tim K.
5.0 out of 5 stars Superlative sportswriting
Reviewed in the United States on March 25, 2020
Verified Purchase
Buzz Saw is as unlikely as the events that brought it to life; a literary and well-crafted retelling of very recent history that captures the essence of what it was like to be along for the World Series run. More than just game stories or statistical minutiae, he captures a cross-section of the characters surrounding the team from players and coaches to advance scouts and broadcasters that makes the sports story a very "old-school" human story.
Read more
11 people found this helpful
Report abuse

Christopher Fuller
5.0 out of 5 stars What’s not to like? The Nats won!
Reviewed in the United States on April 6, 2020
Verified Purchase
Look. I’m a Nats fan. I watched the World Series in a different motel room every game as my wife and I drove cross-country in two packed-to-the-brim SUVs on a move from Arlington, Virginia to Salt Lake City. Jesse Dougherty could have written this book in crayon and I would have given him five-stars. So I am not objective. Still, the kid can write. There were too many heroes to cover in depth, so some had be sipped over, but nonetheless I thought he short-changed Asdrubal Cabrera. Other than that, I read this in two nights. I smiled, cried, re-lived memorable moments, thoroughly enjoying every chapter, every story, every improbability, every anecdote of a remarkable journey to the World Series victory. Nats fans will love this. Baseball fans will appreciate the skilled story telling. And non-fans might become fans if they give this great little book a read. Magical seasons like the one the Nats had, beating incredible odds to make history like no other MLB team has ever (ever!) done, deserve a well-written telling of their story. Dougherty does just that. If he stays at the WaPost, it’s sports page will be in good hands when the great Tom Boswell retires.
Read more
5 people found this helpful
Report abuse

Quaker
5.0 out of 5 stars Outstanding writing and great behind-the-scenes stories
Reviewed in the United States on April 16, 2020
Verified Purchase
Jesse Dougherty is a spectacular and prolific young writer and storyteller, and we are all fortunate that the Washington Post hired him to be the new Washington Nationals beat reporter before the 2019 season, when the beloved Chelsea Janes moved on to cover the 2020 political campaign. Dougherty instantly became a fan favorite, engaging with the community on social media, and displaying an uncanny ability to find the story behind the story, from spring training through the season-long grind, and into the off-season as well, week in, week out, day in, day out. He finds the story, then tells it with grace, humor, and eloquence.

The Nationals' 2019 regular season was filled with more drama and intrigue than any baseball fan would have desired, and then the team gifted us all with an improbable and dramatic World Series run. Jesse's new book Buzz Saw is like his personal collection of the stories that defined that season, dotted with hundreds of Easter eggs that never saw the light of day until now.

Like all of Dougherty's writing, Buzz Saw is a page-turner -- an easy and engaging read that any baseball fan (but particularly Nats fans) will surely enjoy.
Read more
3 people found this helpful
Report abuse
See all reviews