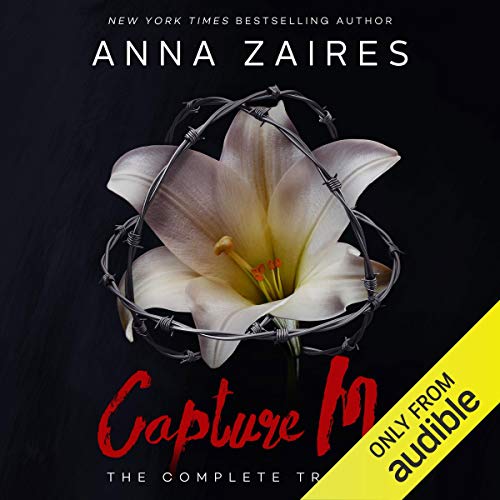 Capture Me: The Complete Trilogy

Forced to join a secret intelligence agency at a young age, Russian interpreter/spy Yulia Tzakova is no stranger to dangerous men. But she's never known one as ruthless and compelling as Lucas Kent. The hard-edged mercenary frightens her, yet she's drawn to him - a man she has no choice but to betray.

Second-in-command to a powerful arms dealer, Lucas Kent has never met a woman he's wanted as much as Yulia. Obsessed with the beautiful blonde, he'll stop at nothing to capture her and make her pay for her betrayal.

From the icy streets of Moscow to the steamy jungles of Colombia, their dark, all-consuming passion will either crush them or set them free.

Read more
©2016 Anna Zaires (P)2016 Anna Zaires
Previous page
Next page
Learn more about membership
List Price: $40.26
You Save: $5.03 (12%)
By completing your purchase, you agree to Audible's Conditions Of Use and Amazon's Privacy Notice. Tax where applicable.
Sold and delivered by Audible, an Amazon company

4.6 out of 5 stars
4.6 out of 5
1,050 global ratings
How are ratings calculated?
To calculate the overall star rating and percentage breakdown by star, we don’t use a simple average. Instead, our system considers things like how recent a review is and if the reviewer bought the item on Amazon. It also analyzes reviews to verify trustworthiness.
View Image Gallery

Amazon Customer
1.0 out of 5 stars Mine was damaged
Reviewed in Canada on March 25, 2021
Love he book but mine was supposed to be brand new but came in damaged condition. Really wish they would send me a new copy
Images in this review

Tanya White
5.0 out of 5 stars I liked it
Reviewed in Canada 🇨🇦 on December 20, 2019
Verified Purchase
I loved this story, however I did sort of wish that Lucas was developed a little more. Some parts were repetitive, like he jsut kept saying "I'll hunt them down and their family too" about everyone who did anything and it got a little lame. I have noticed a pattern like that with the author though and sometimes I feel like I'm reading the same sentence in different parts of the book.

Also, spoiler, when she escaped I didn't like that Lucas came across her by chance. I was hoping for something better like he hunted her down and got her back. Instead he just kinda found her and it wasn't as powerful or redeeming. Like oh, look, there she is...

However, it was a nice book and kept me entertained.

linny
5.0 out of 5 stars Everyone should read this trilogy that loves romance and suspense.
Reviewed in Canada 🇨🇦 on January 3, 2018
Verified Purchase
I only bought this item a few weeks ago and I have already read the first book and I am reading the second one now. I loved the first book. I had a hard job to put it down. It is very interesting and exciting. The way the author writes she makes you feel like your right there watching a movie. I could picture everything in my mind as I read the book. I love when you can get so wrapped up into a story that you don’t hear or see anyone else around you. I would recommend these books to anyone that loves to read. In fact I have just bought her two other trilogies and I am looking forward to reading them also. Thank you Anna Zaire’s for the really good read. I hope you write even more books as exciting as these are.
Read more
2 people found this helpful
Helpful
Report abuse

Ann Bank
4.0 out of 5 stars Easily readable, all 3 in 1
Reviewed in Canada 🇨🇦 on November 3, 2020
Verified Purchase
Good sexy scenes, a bit violent but actually a good spy story with some twists & turns. Only thing is, it started too fast & went out with a bit of a whimper. A little more anticipation would’ve been appreciated.
Read more
Helpful
Report abuse

Alexandra
5.0 out of 5 stars A really rerrific read
Reviewed in Canada 🇨🇦 on December 19, 2020
Verified Purchase
This lady really knows how to tell a story. Anna is one of the best. I love her books.
Read more
Helpful
Report abuse

CP
5.0 out of 5 stars enjoy the storyline
Reviewed in Canada 🇨🇦 on December 14, 2017
Verified Purchase
Even if this book is into erotica area, but the storyline is good.
The relationship between Yulia and Lucas is developing into a trusted relationship with believable twist of plots.
Lucas is a thoughtful man, not a real psychotic like Julian.
Read more
2 people found this helpful
Helpful
Report abuse

Stephanie Fiacco
5.0 out of 5 stars Cant put the books down!
Reviewed in Canada 🇨🇦 on November 8, 2019
Verified Purchase
I loved this read, Its a trilogy you can re read.
Read more
Helpful
Report abuse
See all reviews

Plain, Simple Tom
4.0 out of 5 stars Continuing the Remarkable Saga.
Reviewed in the United Kingdom 🇬🇧 on July 27, 2018
Verified Purchase
In a nutshell: Capture Me is a good continuation of the remarkable story that started with Twist Me, though it's ultimately too brief and underwhelming, Bind Me is an improvement as it fleshes out the characters but the sex scenes are overutilised and repetitive, and Claim Me is the very best of them because there's lots going on, the story is excellent, and it ends wonderfully.

It's not quite as good as the Twist Me trilogy but the books are very well written and overall, it proves to be a dark, exciting and unforgettable odyssey that's unlike anything you've read before. I'm so glad that it found me!
Read more
2 people found this helpful
Report abuse

Sue M.
5.0 out of 5 stars Wonderful
Reviewed in the United Kingdom 🇬🇧 on November 14, 2018
Verified Purchase
In my opinion Anna Zaires has got to be one of the best authors around, I’ve read several of her books and found them all thoroughly enjoyable. Her characters are wonderfully written, so believable, you can’t help but sympathise with them (even though they’re not always the ‘nicest’ people). Her stories stir the emotions, I’ve cried and laughed and sometimes I’ve been shocked, but once you’ve started you’ll find you can’t put the book down. Wonderful.
Read more
2 people found this helpful
Report abuse

Anita
5.0 out of 5 stars OMG
Reviewed in the United Kingdom 🇬🇧 on July 9, 2018
Verified Purchase
Couldn't put it down, hooked from chapter 1 brilliant. I have got to read Twist me now. This is one hell of a rollercoaster
Read more
3 people found this helpful
Report abuse

Ali. J
5.0 out of 5 stars Great book from start to finish
Reviewed in the United Kingdom 🇬🇧 on August 5, 2018
Verified Purchase
I couldn't put this book down!! From the moment I started it, I was hooked. I read this whilst on holiday and read it in a couple of days. It had everything you want from a good book, solid characters that were believable, as well as a solid story.
I really enjoyed the book and I am looking forward to reading more books, from this author.
Read more
3 people found this helpful
Report abuse

J. James
5.0 out of 5 stars Another winner
Reviewed in the United Kingdom 🇬🇧 on January 31, 2017
Verified Purchase
Read Twist Me and went straight out and bought this book. Wonderful books, with great writing taking you on a roller coaster ride. Would recommend that you read Twist Me first as characters cross over in the books.
The heros are dark but you end up routing for them, highly recommend these books and the Krinar chronicles are one of my all time favourites. A great author, please hurry with more stories!!
Read more
5 people found this helpful
Report abuse
See all reviews