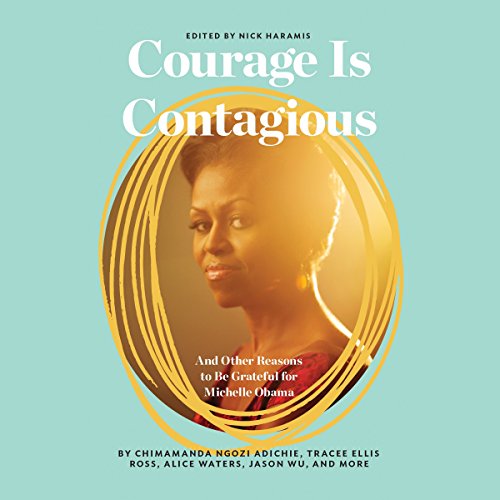 Courage Is Contagious: And Other Reasons to Be Grateful for Michelle Obama

A collection of essays celebrating the influential former first lady, by an array of acclaimed contributors and with a foreword by Lena Dunham

Michelle Obama's legacy transcends categorization. Mrs. Obama was not only our first black first lady; she was President Obama's equal partner in marriage and parenthood and a tireless advocate for women's rights, education, healthy eating, and exercise. Her genre-busting personal style encouraged others to speak, to engage, even to dress as they wished. In an extension of his popular T, The New York Times Style Magazine feature, Nick Haramis has assembled 19 essays from prizewinning writers, Hollywood stars, and political leaders - all of whom have been moved and influenced by Mrs. Obama's extraordinary example of grace in power.

Here are original testimonials from Gloria Steinem, Chimamanda Ngozi Adichie, Alice Waters, and Charlamagne tha God, among others. Presidential biographer Jon Meacham supplies historical perspective. Actress Tracee Ellis Ross suggests that Mrs. Obama "provided an antidote to all the false representations of black women that have inundated us for centuries." Anna Wintour and designer Jason Wu celebrate the former first lady's impact as an international fashion icon. Two ninth-grade girls - one in training to be a boxer - talk about how Mrs. Obama has emboldened them to be themselves.

Here are some of the many facets of Michelle Obama as she continues to inspire us, a stirring reminder that the best of America once lived in the White House, embodied in one authentic, inclusive, and courageous woman.

Read by the authors and a full cast of narrators:

Read more
©2017 Lena Dunham, Jenni Konner, and Nick Haramis (P)2017 Random House Audio
Previous page
Next page
Learn more about membership
List Price: $17.48
You Save: $2.18 (12%)
By completing your purchase, you agree to Audible's Conditions Of Use and Amazon's Privacy Notice. Tax where applicable.
Sold and delivered by Audible, an Amazon company
Share

4.8 out of 5 stars
4.8 out of 5
46 global ratings
How are ratings calculated?
To calculate the overall star rating and percentage breakdown by star, we don’t use a simple average. Instead, our system considers things like how recent a review is and if the reviewer bought the item on Amazon. It also analyzes reviews to verify trustworthiness.
Top reviews

Kim w
5.0 out of 5 stars A wonderful collection of essays💕
Reviewed in the United States on April 27, 2018
Verified Purchase
These are wonderful and inspiring stories about our former First Lady, the beautiful and highly intelligent Michelle Obama. These stories will inspire you especially through these hard and strange political times we are now facing. These stories will give you hope.
Read more
2 people found this helpful
Report abuse

Waterville 8
5.0 out of 5 stars Is Courage Contagious? I hope so. This book inspires the "best" in me.
Reviewed in the United States on July 26, 2018
Verified Purchase
This book is full of anecdotes from people who have worked with or know Michelle Obama. She is an inspiration to young people. Why young people? They are open minded to advice and role modeling from this amazing women.
Read more
Report abuse

Candy
5.0 out of 5 stars Five Stars
Reviewed in the United States on May 26, 2018
Verified Purchase
Great for everyone to work through their fears
Read more
Report abuse
See all reviews
Back to top
Get to Know Us
Make Money with Us
Amazon Payment Products
Let Us Help You
EnglishChoose a language for shopping. CanadaChoose a country/region for shopping.
© 1996-2022, Amazon.com, Inc. or its affiliates