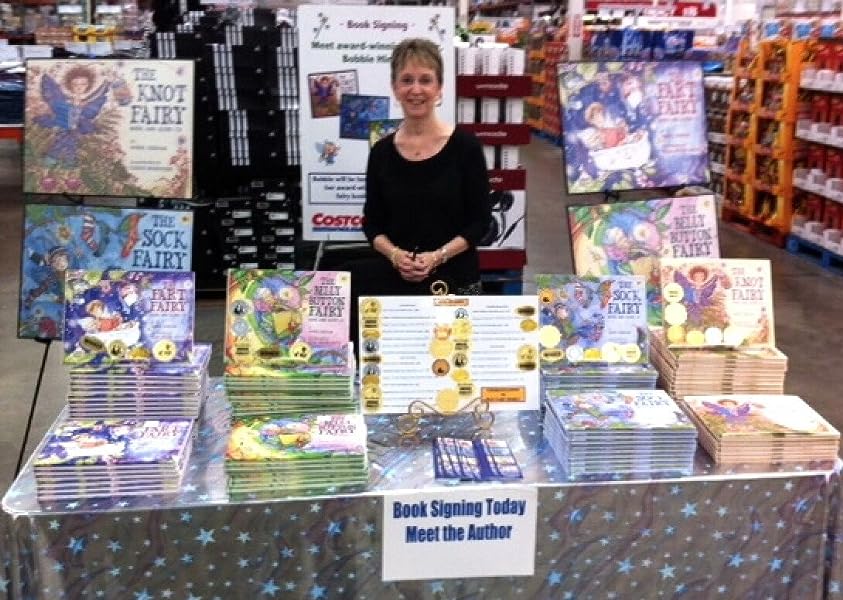 by Bobbie Hinman (Author)
4.6 out of 5 stars 78 ratings
See all formats and editions
Sorry, there was a problem loading this page. Try again.

Best-selling author Bobbie Hinman tells you how she created, self-published and sold over 55,000 copies of her award-winning children’s picture books.
Her books have won 28 picture book awards and sold over 50k copies. Let Bobbie guide you through the process of creating a successful children's picture book step by step.

You will learn to:

Bobbie Hinman is the self-published author of 5 children’s picture books that have sold over 50,000 copies and received 25 children’s book awards. She has a B.S. degree in Elementary Education, with a minor in Children's Literature. Bobbie has been a speaker and presenter at schools, libraries and bookstores, as well as major book festivals all across the United States and in Canada. Her articles have appeared in the Independent Book Publishers Association magazine and in many blogs and interviews.

Start reading How to Create a Successful Children's Picture Book on your Kindle in under a minute.

Bobbie Hinman is a former elementary teacher with B.S. degree in Elementary Education and a Minor in Children's Literature. Her 5 children’s picture books have received a combined total of 28 children's book awards, including the Moonbeam Book Awards' Gold Medal for &quot;Best Picture Book Series of 2017.&quot;

Bobbie is also the author of &quot;How to Create a Successful Children's Picture Book.”

She is a member of SCBWI (Society of Children’s Writers and Illustrators) and IBPA (Independent Book Publishers Association, as well as a judge for the Royal Palm Literary Awards

Bobbie has been a speaker and presenter at numerous schools, libraries and bookstores, as well as major book festivals all across the United States and in Canada. Her articles have appeared in the Independent Book Publishers Association magazine and in many blogs and interviews. Her bookstore events have been featured in the Barnes &amp; Noble Inside newsletter. She is currently in demand as an editor of children's books.

4.6 out of 5 stars
4.6 out of 5
78 global ratings
How are ratings calculated?
To calculate the overall star rating and percentage breakdown by star, we don’t use a simple average. Instead, our system considers things like how recent a review is and if the reviewer bought the item on Amazon. It also analyzes reviews to verify trustworthiness.
Top reviews

Daniel Horvat
5.0 out of 5 stars Very interesting and useful book.
Reviewed in the United Kingdom on July 20, 2017
Verified Purchase
Thank you Bobbie for sharing so much experience and knowledge. I will follow a lot of them for sure. This is a really really good book for everyone who wants to be an author and book selling marketing manager.
Read more
Report abuse

Sea_Turtle
5.0 out of 5 stars The Best One Out There
Reviewed in the United States on February 24, 2019
Verified Purchase
I have two books published, but I have decided to shake things up and try my hand at writing a children's book. Boy, I had no idea how much is involved with writing a picture book! I have read several different "how to" books and I have to say that Bobbie Hinman has written the best one out there! All of my questions have been answered in this book alone and more questions I didn't realize I should have been asking! Don't waste any more time researching the other "how to" books because this one is THE ONE you are looking for! Thank you Bobbie Hinman... I think you have just made this new adventure for me a little less mind-boggling and added a touch more of encouragement!
Read more
20 people found this helpful
Report abuse

Wanda
5.0 out of 5 stars Essential for every children's author
Reviewed in the United States on November 15, 2017
Verified Purchase
I have read many books on how to write and publish a book. I found Bobbie Hinman's book the most practical and professional. Sometimes these types of books are so chocked full of advice that the reader (me) feels overwhelmed. I have often stopped reading a similar book because I didn't know what my first step should be. The information was just too much. Hinman, instead, lays out her book in a logical and sequential manner. The amount of information is just right. The way she approaches her business is very professional and truly the right way to do it. I will return to this book again and again and I highly recommend it to other children authors.
Read more
11 people found this helpful
Report abuse

The Booksmith Review
5.0 out of 5 stars The BEST Book on the Market for creating childrens books!
Reviewed in the United States on August 1, 2017
Verified Purchase
I love anything that Bobbie Hinman does and like everything this book is exceptional. She takes you from start to finish. lay her book next to you and follow it, when you are done with her book you will have one of your very own as well. It is through, easy to understand and follow along. This book is a must for your library as a reference book. You will want to refer to it often. It is worth every cent! Thank you, Bobbie!
Read more
14 people found this helpful
Report abuse

some guy
5.0 out of 5 stars Read this book before all others
Reviewed in the United States on September 18, 2017
Verified Purchase
I have bought many books on writing and illustrating children's books and most of the time they get bogged down in too much information. Information is king, but this book gives it to you in a straightforward manner from an author that is doing what she writes about. You can find plenty of articles on how to format a book, etc. but if you want to know the real-world nuts and bolts of how to write, market and self-publish your own book, start here.
Read more
10 people found this helpful
Report abuse
See all reviews
Back to top
Get to Know Us
Make Money with Us
Amazon Payment Products
Let Us Help You
EnglishChoose a language for shopping. CanadaChoose a country/region for shopping.
© 2008-2021, Amazon.com, Inc. or its affiliates