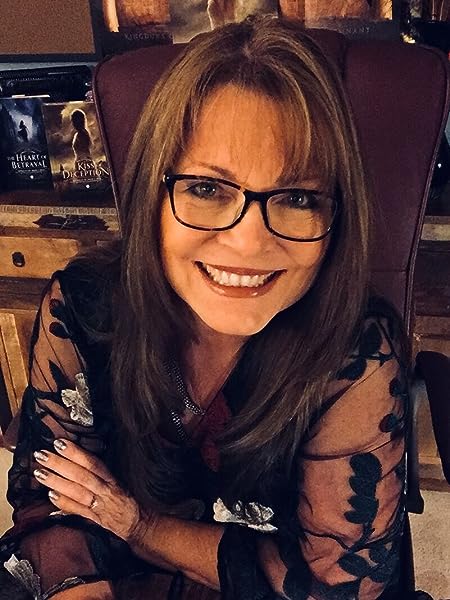 by Mary E. Pearson (Author)
4.7 out of 5 stars 1,290 ratings
Book 1 of 2 in the Dance of Thieves Series
See all formats and editions
Sorry, there was a problem loading this page. Try again.

The Beauty of Darkness:

"Pearson has created such a dynamic and inspiring heroine. . . . Fantasy fans will love this marvelous, high-action conclusion to the trilogy." ―School Library Journal

"Pearson is an excellent storyteller . . . . She brings an ambitious trilogy to a rousing conclusion." ―The Horn Book

The Heart of Betrayal:

"It's rare that the second book in a series is as good–or perhaps better–than the first, but that's the case here. . . . Anticipation for the next volume will start as soon as this one is put down." ―Booklist, starred review

The Kiss of Deception:

"Pearson (the Jenna Fox Chronicles) is off to an extraordinary start with her fantasy series, creating an alluring world and romance that's ideal for fans of Kristin Cashore and Megan Whalen Turner." ―Publishers Weekly, starred review

"Romance, adventure, mysticism–this book has it all and it just may be the next YA blockbuster." ―School Library Journal, starred review

Pearson studied art at Long Beach State University, and worked as an artist before earning her teaching credentials at San Diego State University. She writes full-time from her home in Carlsbad, California, where she lives with her husband and two dogs.

Start reading Dance of Thieves on your Kindle in under a minute.

4.7 out of 5 stars
4.7 out of 5
1,290 global ratings
How are ratings calculated?
To calculate the overall star rating and percentage breakdown by star, we don’t use a simple average. Instead, our system considers things like how recent a review is and if the reviewer bought the item on Amazon. It also analyzes reviews to verify trustworthiness.

A.P.
5.0 out of 5 stars Mary E. Pearson has done it again!!!
Reviewed in Canada on August 15, 2018
Verified Purchase
Mary E. Pearson has done it again!!! Another epic novel that had me captivated from the start!! I loved hearing more about characters from the remnant chronicles, as well as meeting new ones.
This novel had amazing story development paired with amazing characters and character development. I am left wanting more!!! I couldn't put this book down!! Highly recommend this to anyone. Thank you Mary E. Pearson for returning me to one of my favourite worlds😊

illborrowthisone
5.0 out of 5 stars Forced Proximity Enemies to Lovers
Reviewed in Canada on January 20, 2021
Verified Purchase
This was my absolute favorite read of 2018. I love the world Mary Pearson has created and her characters speak to me. If you like a force proximity enemies to lovers story. This is one you should consider picking up.
Read more
Helpful
Report abuse

Amazon Customer
4.0 out of 5 stars Long but interesting
Reviewed in Canada on August 10, 2018
Verified Purchase
While slow at times, and with perhaps an excess of characters - this novel was thoroughly enjoyable. It was largely character driven, with a fairly straightforward premise. The relationship between the two main characters was sweet but also frustrating at times...
My main complaint was the lack of description of the world around them - the places sounded very interesting but I never got a real mental picture of them. There was an arc? And mention of falling stars? So is this the aftermath of a science fiction type world....there was talk of ruins but no descriptions of them. I kept wanting more and never got it. Give me more depth.
Aside from that it was great - I pre-ordered this one I liked the sound of it so much and I'll probably pre-order the second because the ending was so intriguing (olives? stars?)

Mariève Tremblay
5.0 out of 5 stars so good
Reviewed in Canada on January 18, 2019
Verified Purchase
Really good. I had difficulty getting back with the details from The Remnants chronicles in my memory but the book follow the other series quite well and is as enthralling
Read more
Helpful
Report abuse

Stephanie Bouchard
5.0 out of 5 stars Love it
Reviewed in Canada on August 30, 2021
Verified Purchase
The first bit is a bit dry but once the main characters interact it’s so good!
Read more
Helpful
Report abuse

Mim Inkling
4.0 out of 5 stars Definitely worth a read
Reviewed in the United Kingdom on August 29, 2018
Verified Purchase
I picked up Dance of Thieves primarily because of the cover. I actually had some reservations about the book based on the description. I was thinking soppy romance between a strong woman and a man she can’t have (snore, seen it before), and multiple perspectives (which is usually terrible)… But the cover was just so pretty, I thought it might be worth a go. And I wasn’t wrong, I should say up front (for my ego). I just didn’t hate those things about it as much as I thought I would.

Firstly, it is dual perspective, and, yet again, I don’t think this worked. I found myself getting distracted by it. I just wanted someone to tell the story and get on with it. There’s a time and place for more than one perspective, and a story with a strong romantic storyline just isn’t it. In my opinion, anyway… That being said, the technique wasn’t a complete disaster. I did feel that it added something in terms of illuminating the characters. And I found both characters, Kazi (the Rahtan thief) and Jase Ballenger (the outlaw king), equally likeable and interesting. I liked hearing what they were thinking, and having the dual perspective did lead to a deeper sense of character and attachment by the reader.

A Dance of Thieves is also very well written. So, if the use of dual perspectives didn’t quite work, the rest of the book really, really did. There’s some beautiful descriptive prose, a good build to the story and characters, and the whole thing clearly has a lot of imagination behind it.

The story arc is great. There’s a lot of tension, some very “sexy” moments, and it moves along at a reasonable clip. The worldbuilding is fantastic, and I thought the whole thing had a very “wild west” feel (rather than magic and monsters as usual). I didn’t actually hate the romance… I’m not adverse to the odd kissy moment, but generally I find fantasy focused around a love interest to be a little cloying… Maybe they just activate my inner cynic. Here, yes, there’s a strong romance focus. However, it’s in the context of great characters, a mystery and an adventure. Lots of surprises and twists and turns. It’s enough to keep you from rolling your eyes and screaming “get on with it you fools!!” at the book.

This is not the most innovative book I’ve ever read in this genre. But who said everything had to be? I thoroughly enjoyed it. It was exciting, gripping, and beautifully written. I would definitely recommend it for fans for David Dalglish, Trudi Canavan, and Alwyn Hamilton. And I’ll definitely be looking into other books by Mary Pearson.

aaliyahmusa
5.0 out of 5 stars My favourite 2018 read
Reviewed in the United Kingdom on February 9, 2019
Verified Purchase
I adored the Remnant Series so when this was released I wasn’t sure how I felt As sometimes a follow up book isn’t as good!! OMG I loved this book in fact I am going to be miserable until I get the next book next August?)…? Okay about the story it is set in the same world but years after!! So if you read Remnant Chronicles you will hear mention some familiar names but you don’t need to read them as they work just as well as stand alone duology! The main characters are sassy tough and it has a great love to hate , hate to love relationship! We get to see a totally different part of the world As usual Mary Pearson the amazing author did her usual magic The writing flowed beautifully!?
The twists in the plots are still there and conflict and a new addition of riddles that are genius and work so well ( even though I can’t ever guess or make up one ) I would highly recommend this book you won’t be disappointed at all You just have to wait for second part sadly

Shana
5.0 out of 5 stars Loved it!
Reviewed in the United Kingdom on April 1, 2021
Verified Purchase
A great book. Mary Pearson has got to be one of my favourite authors at the moment. She really allows you to connect to the characters and feel included in their story. I am now reading the revenant series which takes place in the same kingdoms as dance of thieves and I love the connections between the duology and the tribology. Amazing!
Read more
Report abuse

Sydney L.
4.0 out of 5 stars Very floppy!
Reviewed in the United Kingdom on June 28, 2021
Verified Purchase
Came 5 days late, but the book is very floppy so it’s worth it lol. I can’t wait to read this. :)
Read more

One person found this helpful
Report abuse
See all reviews
Back to top
Get to Know Us
Make Money with Us
Amazon Payment Products
Let Us Help You
EnglishChoose a language for shopping. CanadaChoose a country/region for shopping.
© 2008-2021, Amazon.com, Inc. or its affiliates