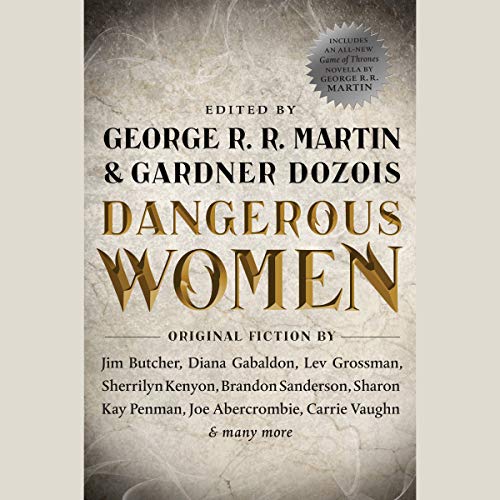 All new and original to this volume, the 21 stories in Dangerous Women include work by 12 New York Times best sellers, and seven stories set in the authors’ best-selling continuities - including a new "Outlander" story by Diana Gabaldon, a tale of Harry Dresden’s world by Jim Butcher, a story from Lev Grossman set in the world of The Magicians, and a 35,000-word novella by George R. R. Martin about the Dance of the Dragons, the vast civil war that tore Westeros apart nearly two centuries before the events of A Game of Thrones.

Writes Gardner Dozois in his introduction, "Here you’ll find no hapless victims who stand by whimpering in dread while the male hero fights the monster or clashes swords with the villain, and if you want to tie these women to the railroad tracks, you’ll find you have a real fight on your hands. Instead, you will find sword-wielding women warriors, intrepid women fighter pilots and far-ranging spacewomen, deadly female serial killers, formidable female superheroes, sly and seductive femmes fatale, female wizards, hard-living bad girls, female bandits and rebels, embattled survivors in post-apocalyptic futures, female private investigators, stern female hanging judges, haughty queens who rule nations and whose jealousies and ambitions send thousands to grisly deaths, daring dragonriders, and many more."

Stories and Narrators (in order of appearance):
“Some Desperado” by Joe Abercrombie; Read by Stana Katic
“My Heart Is Either Broken” by Megan Abbott; Read by Jake Weber
“Nora’s Song” by Cecelia Holland; Read by Harriet Walter
“The Hands That Are Not There” by Melinda Snodgrass; Read by Jonathan Frakes
“Bombshells” by Jim Butcher; Read by Emily Rankin
“Raisa Stepanova” by Carrie Vaughn; Read by Inna Korobkina
“Wrestling Jesus” by Joe R. Lansdale; Read by Scott Brick
“Neighbors” by Megan Lindholm; Read by Lee Meriwether
“I Know How to Pick ’Em” by Lawrence Block; Read by Jake Weber
“Shadows for Silence in the Forests of Hell” by Brandon Sanderson; Read by Claudia Black
“A Queen in Exile” by Sharon Kay Penman; Read by Harriet Walter
“The Girl in the Mirror” by Lev Grossman; Read by Sophie Turner
“Second Arabesque, Very Slowly” by Nancy Kress; Read by Janis Ian
“City Lazarus” by Diana Rowland; Read by Scott Brick
“Virgins” by Diana Gabaldon; Read by Allan Scott-Douglas
“Pronouncing Doom” by S.M. Stirling; Read by Stana Katic
“Name the Beast” by Sam Sykes; Read by Claudia Black
“Caregivers” by Pat Cadigan; Read by Janis Ian
“Lies My Mother Told Me” by Caroline Spector; Read by Maggi-Meg Reed
“Hell Hath No Fury” by Sherilynn Kenyon; Read by Jenna Lamia
“The Princess and the Queen” by George R. R. Martin; Read by Iain Glen

The introduction by Gardner Dozois is read by Fred Sanders and the interstitial author biographies are read by Karen Dotrice.

Read more
©2013 Random House (P)2013 Random House Audio
Previous page
Next page
Learn more about membership
List Price: $60.21
You Save: $7.53 (13%)
By completing your purchase, you agree to Audible's Conditions Of Use and Amazon's Privacy Notice. Tax where applicable.
Sold and delivered by Audible, an Amazon company
Share

4.2 out of 5 stars
4.2 out of 5
474 global ratings
How are ratings calculated?
To calculate the overall star rating and percentage breakdown by star, we don’t use a simple average. Instead, our system considers things like how recent a review is and if the reviewer bought the item on Amazon. It also analyzes reviews to verify trustworthiness.
Top reviews

Thor
4.0 out of 5 stars A Huge Array of great stories!
Reviewed in Canada on September 15, 2018
Verified Purchase
This covered lots of stories from different authors. Some I liked. Some i did not only because sci-fi is not a great interest of mine, HOWEVER, I truly loved the creativity in the stories and the genius of the authors who can come up with some great fantasy stuff. Lansdale was in there - One of my favorites and as ever - he did not disappoint. Loved, loved having women on centre stage in these stories - good and evil - loved them!
Read more
Helpful
Report abuse

Nancy L. Draper
4.0 out of 5 stars A delightful surprise
Reviewed in Canada on September 11, 2014
Verified Purchase
I bought this book for the Diana Gabaldon story, but began reading the collection from the beginning. I found myself engrossed in stories from genres I would never have considered. As a new story began my caution of its type slipped away as superb story telling took over. I was so sorry, as is always the case with good writing, to have the collection end. But , I have come away with a list works by authors I look forward to pursuing.
Read more
4 people found this helpful
Helpful
Report abuse

hedy
4.0 out of 5 stars Yes, women could be very dangerous
Reviewed in Canada on February 17, 2014
Verified Purchase
Didn't know what to expect but each short story was chocked full of exciting reading. Some stories were so exciting I couldn't read them before bed because there were scary nightmares after. Downloaded a new author from reading the short stories.
Read more
3 people found this helpful
Helpful
Report abuse

LiFeFaCe
5.0 out of 5 stars Nice Book
Reviewed in Canada on December 3, 2018
Verified Purchase
I got it for the wife, and I didn't hear any complaint, so I take that as its pretty good.
Read more
Helpful
Report abuse

amazonuser123456
1.0 out of 5 stars Other than that the stories in this book are very good, I've enjoyed most of them and skipped those ...
Reviewed in the United Kingdom on May 17, 2016
Verified Purchase
THIS BOOK CONTAINS A MASSIVE HARRY DRESDEN SPOILER

The description to the book reveals a huge spoiler for anyone who hasn't finished the series. If you're ever considering reading the Dresden files then skip this part entirely, as both the page long editorial and short story itself aren't meant to be read until you have finished the series.

I'm staggered that this wasn't mentioned. How hard would it have been to have included a line saying 'Spoiler ahead- do not read unless you have finished the Dresden files series.'?

Other than that the stories in this book are very good, I've enjoyed most of them and skipped those that I did not enjoy.
Read more
One person found this helpful
Report abuse

Jess
4.0 out of 5 stars When it's good, it's great.
Reviewed in the United Kingdom on July 2, 2015
Verified Purchase
Being an anthology obviously not every story will appeal to every reader, but after thoroughly loving almost every story in the similar 'Rogues' collection and being a huge fan of stories featuring interesting women, I was surprised by how frequently disappointed I was by this collection. The stories I liked, I loved - 'Some Desperado' was a great opener, and 'Raisa Stepanova', 'Bombshells', 'Neighbors', 'Shadows for Silence in the Forests of Hell', and 'The Girl in the Mirror' really stood out to me. I would have given this five stars if all the stories were as good, but I still say it's worth four stars for how good it can be.

There were a few stories that properly disappointed me, being less about 'dangerous women' and more about the men who wanted to have sex with said women, the tired old 'femme fatale' trope that I hoped this book would avoid - 'Wrestling Jesus' and 'I Know How to Pick 'Em' were particularly bad for this. 'Wrestling Jesus' bored me, frankly, and 'I Know How to Pick 'Em' made me put my Kindle down in disgust after finishing it. There's a persistent theme of sexual violence through a lot of the stories that bothered me.
Read more
2 people found this helpful
Report abuse

ChrisH
5.0 out of 5 stars but I really enjoyed all the stories
Reviewed in the United Kingdom on November 17, 2015
Verified Purchase
I brought this as there were two stories I really wanted to read, one by Sharon Penman and one by Diana Gabaldon. I wasn't sure about the other stories as I was unfamiliar with the authors, but I really enjoyed all the stories. This is a fabulous collection, the stories were all very well written, and certainly left me wanting to read more by all the authors.
Read more
One person found this helpful
Report abuse

NIck Verner
4.0 out of 5 stars Some great stories in here
Reviewed in the United Kingdom on January 17, 2016
Verified Purchase
As with any anthology, there are some more favourable stories than others but a great collection. Something for everyone and it has introduced me to some new authors whose other books I will definitely be checking out. Some of the stories definitely left me wanting more.
Read more
One person found this helpful
Report abuse

stellasstar
5.0 out of 5 stars Great compilation
Reviewed in the United Kingdom on September 9, 2017
Verified Purchase
All the stories in this book are quite fabulous. I've met some new authors I want to read more of.
Read more
Report abuse
See all reviews
Back to top
Get to Know Us
Make Money with Us
Amazon Payment Products
Let Us Help You
EnglishChoose a language for shopping. CanadaChoose a country/region for shopping.
© 1996-2022, Amazon.com, Inc. or its affiliates