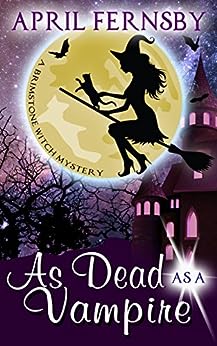 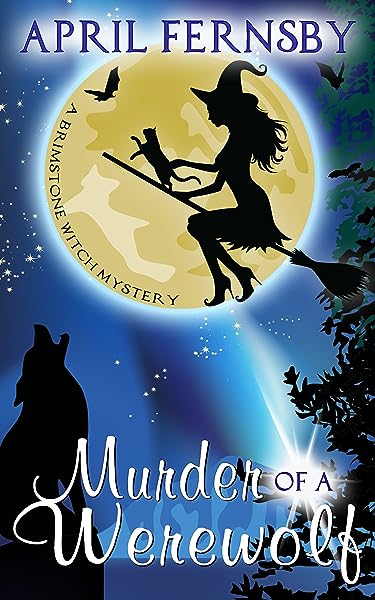 by April Fernsby (Author) Format: Kindle Edition
Book 2 of 13: A Brimstone Witch Mystery
See all formats and editions
Sorry, there was a problem loading this page. Try again.
It was only a matter of time before someone put an end to the evil vampire, Uriah Firenze.

Uriah had made himself extremely unpopular in the paranormal town of Brimstone. His scathing comments and nasty actions gained him many enemies.

Justice witch, Cassia Winter, investigates Uriah’s murder with the help of her cat, Stanley. Cassia has more than one opportunity to use her magical powers as their investigation progresses.

They probe deeper into the mystery and discover a shocking secret from Uriah’s past. Is it related to his murder?

More secrets are revealed and the sleuthing duo are taken down a new path. They get closer to the killer but at what cost to their own safety?

A gripping mystery with a surprising conclusion.

You can also sign up for April's newsletter to get her new releases: www.aprilfernsby.com

April Fernsby lives in the north of England in a county called Yorkshire. Yorkshire has its fair share of hauntings and supernatural events, including a witch called Mary Bateman, aka The Yorkshire Witch, whose skeleton now hangs in a local museum.

April loves all things supernatural and mysterious. Her favourite book as a child was ‘The Faraway Tree’ as it took the reader into a different world where unusual creatures lived. April looked for a similar tree near her house but never found it.

Her Brimstone Witch series involves the main character, Cassia Winter, going through a cellar door and into another world where magical creatures live, and mysteries abound.

4.4 out of 5 stars
4.4 out of 5
218 global ratings
How are ratings calculated?
To calculate the overall star rating and percentage breakdown by star, we don’t use a simple average. Instead, our system considers things like how recent a review is and if the reviewer bought the item on Amazon. It also analyzes reviews to verify trustworthiness.
Top reviews

seafrana
5.0 out of 5 stars Review
Reviewed in Canada on August 7, 2018
It was quite intriguing and keep you glued to the story till the end with steamy scenes and intricate challenges.
Read more
Helpful
Report abuse

Katherine M
4.0 out of 5 stars A fun story.
Reviewed in Canada on January 28, 2018
I enjoyed this second book in the series, and will read the next one.
Read more
Helpful
Report abuse
See all reviews

Kindle Customer Baz
4.0 out of 5 stars A good story
Reviewed in the United Kingdom on September 21, 2020
Verified Purchase
While I found the writing style and narrative a little simplistic the actual story is very good. Follow the heroine to the magical town of Brimstone where the townspeople are every form of magical creature you can think of. Our protagonist a mortal girl just discovering the fact that she's a Justice Which embarks on a case of murder with half the town hiding secrets it's not going to be easy. Together with her talking cat, she unravels the clues to find the culprit. Full of wonderful characters snark humour and lots of magic this is well worth a read, Baz
Read more
Report abuse

VickieB
5.0 out of 5 stars Amazing book and series
Reviewed in the United Kingdom on February 14, 2021
Verified Purchase
I've just finished As Dead As A Vampire and it was as amazing as the last book. The series so far is so good, I find myself making excuses so I can sit down and read another few chapters. I would certainly recommend this series, I am just about to purchase the box set so I can move on to book 3.
Read more
Report abuse

PJ Bookish
3.0 out of 5 stars Broomsticks seem cool.
Reviewed in the United Kingdom on July 9, 2017
Verified Purchase
Another mystery to be solved in Brimstone by the plucky witch and her faithful cat.
I'm enjoying finding out more about the town and the various residents.
Read more
Report abuse