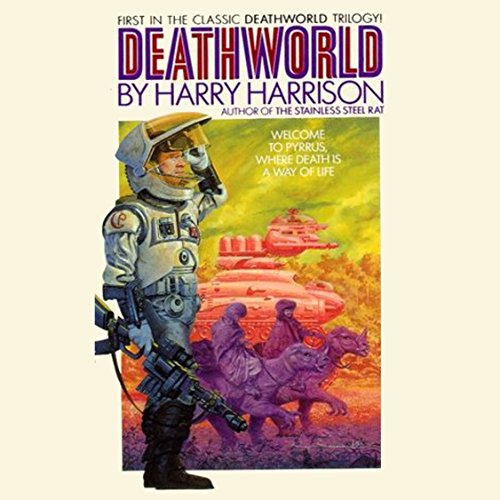 Deathworld centers on Jason dinAlt, a professional gambler who uses his somewhat erratic psionic abilities to tip the odds in his favor. He is challenged by a man named Kerk Pyrrus (who turns out to be the ambassador from the planet Pyrrus) to turn a large amount of money into an immense sum by gambling at a government-run casino. He succeeds and survives the planetary government's desperate efforts to steal back the money.

In a fit of ennui, he decides to accompany Kerk to his home, despite being warned that it is the deadliest world ever colonized by humans... DEATHWORLD!

Deathworld is one of the classics of the Golden Age of science fiction, born in the pages of Astounding Science Fiction under the editorship of John W. Campbell, Jr.

List Price: $25.00$25.00
You Save: $1.90$1.90 (8%)
By completing your purchase, you agree to Audible's Conditions Of Use and Amazon's Privacy Notice. Tax where applicable.
Sold and delivered by Audible, an Amazon company

4.2 out of 5 stars
4.2 out of 5
751 global ratings
How are ratings calculated?
To calculate the overall star rating and percentage breakdown by star, we don’t use a simple average. Instead, our system considers things like how recent a review is and if the reviewer bought the item on Amazon. It also analyzes reviews to verify trustworthiness.

A. Volk
#1 HALL OF FAME
5.0 out of 5 stars Fun, fast SF action
Reviewed in Canada 🇨🇦 on April 2, 2013
Verified Purchase
Harry Harrison is perhaps most famous for his character Slippery Jim, The Stainless Steel Rat. Here we meet Jason dinAlt, whose cast in a similar mold. A semi-psychic professional gambler, Jason craves excitement more than money. So when he's approached for a do-or-die betting scheme, he has to go for it. Only it leads to him decided to go to Pyrrus, the deadliest planet in the universe. Every plant, insect, bird, and mammal exists solely to kill human life. The name of the planet is appropriate for though its citizens are perhaps the toughest in the universe, they are fighting an everlasting battle against a planet that is slowing killing them off. Jason has to solve the mystery of why Pyrran life is so hostile to humans. How quickly he can will influence just how many Pyrrans are left to appreciate his victory.

In the second story, Jason is kidnapped from Pyrrus by an ultra-moralist who wants to hold him accountable for past crimes. Jason manages to foil the kidnapping by wrecking the space ship they are on. This forces them to crash on a strange backwards planet. Jason has to fight his way up the ladder of several backwards and violent cultures (roughly cavemen, then early civilization, then Renaissance). This is a fun story as Jason gets to use his knowledge of science to work "magic" and advance up the ladder towards both survival and rescue. He relucatantly keeps his kidnapper with him, as the hopeless ethicist would otherwise die. So we get a steady stream of moral thought throughout the book, but Harrison keeps it light enough for the action and fun to be the real stars of this book.

In the final entry of the series, Jason is reunited with his Pyrran friends. He decides to lead some of them in an effort to tame a planet that is rich in minerals, but populated by vicious Mongol-type hordes that have wiped out all attempts at settling on their planet. Can the uber-tough Pyrrans succeed were all others have failed? If they can, you can be sure it will be in large part thanks to Jason's schemes and ideas. This book again looks at the clash of cultures and technology, but is almost a recreation of life under Genghis Khan or Tamerlane. It's another fun romp that moves along at a brisk pace.

All of these stories are fast, fun, and full of interesting SciFi technology and creatures. Harrison seems to be at his best when writing a witty, sarcastic character. Think of Roger Moore's James Bond and you're not too far from the mark. So this is an excellent collection for both Harrison fans as well as for people who just want a fun SciFi read. It includes a bonus short story at the end that briefly continues the adventures of Jason and his friends. Given all that, I have no problem giving this book five stars. It's not world-shattering fiction, but it is an awfully fun way to spend a bit of your time.
Read more
Helpful
Report abuse

AA Lee
4.0 out of 5 stars New Eyes Needed
Reviewed in Canada 🇨🇦 on June 2, 2020
Verified Purchase
This is one of those classics I have to re-read from time to time. The characters are larger than life - Jason is the archetypical trickster; the inhabitants of Pyrrus are archetypical warrior giants. The situation is dire and yet in its own way, black and white. The only mystery is why is the planet trying to kill half of the colony while the other half is left unbothered. It is said that sometimes a problem can only be solved once new eyes examine it - that is definitely true once our conniving conman-gambler gets involved.
Read more
Helpful
Report abuse

Northerner
1.0 out of 5 stars Great story bad synopsis
Reviewed in Canada 🇨🇦 on May 11, 2017
Verified Purchase
Misleading synopsis. Great story but I was mislead into believing it was the trilogy. Partly my own fault. It is a great story. But not the best copy. You can get it in other places for a better price. And more of his work. A shame really
Read more
Helpful
Report abuse

Ken
5.0 out of 5 stars A good book
Reviewed in Canada 🇨🇦 on November 10, 2003
For sure one of the best deathworlds. i really bringsout the best sifi for sifi fans
Read more
Helpful
Report abuse
See all reviews

M. Dowden
4.0 out of 5 stars Jason dinAlt
Reviewed in the United Kingdom 🇬🇧 on October 24, 2016
Verified Purchase
Serialised and then published in 1960 this was the first novel in what became a trilogy. Here we meet Jason dinAlt as he is coerced into using his psychic powers to win at a casino and help raise funds for a planet that is having some trouble. As the plan is pulled off so Jason has to do a quick bunk with the man asking for his help and so finds himself deciding to do something a bit more energetic than his life of just making money.

Thus we find ourselves plunged into life on the planet Pyrrus, a world which is inhospitable and where the flora and fauna seem to be extremely dangerous, and apparently getting more so towards humans. But will Jason be able to find out why this is, and why there seem to be two separate human colonies on the planet?

This is quite intriguing but in some ways I felt that this was a bit too short, where other incidents could have been given greater scope. It is rather like the difference between the new Doctor Who series, and the older ones which I grew up with, in that this seems to be a bit rushed, rather than letting the story pan out a bit more and bring in a little bit more depth. This does still make for an entertaining read though.
Read more
2 people found this helpful
Report abuse

Tim Rowe
4.0 out of 5 stars The occasional outdated attitude doesn't spoil an excellent book
Reviewed in the United Kingdom 🇬🇧 on August 19, 2016
Verified Purchase
In a 1960s book it's no surprise to find some stereotyped gender assumptions, but it's clear the author was doing a good job for the time of trying to get past them. And I do like books where I think I've spotted a plot hole and it turns out the author was a step ahead of me. This is a well paced adventure with nice twists and a fine social conscience. And is that a well executed cold-war analogy I can see lurking in the background?
Read more
One person found this helpful
Report abuse

Amazon Customer
1.0 out of 5 stars Cut down
Reviewed in the United Kingdom 🇬🇧 on June 1, 2022
Verified Purchase
Large section removed. Do not buy. Will? not be wasting my time with blatant rip offs again !!! Yes I have the paperback.... In
Read more
Report abuse

Baronbill
4.0 out of 5 stars Jolly good 60s sf
Reviewed in the United Kingdom 🇬🇧 on January 5, 2015
Verified Purchase
If readers are reporting problems with text, how is it two years later these problems still exist. That aside read this first in th 60s enjoyed it, Got it on kindle, read it again still enjoyable, a bit dated but that's to be expected. Yes I did report problems with text but I won't hold my breath.
Read more
One person found this helpful
Report abuse

Amazon Customer
5.0 out of 5 stars Excellent self contained novel, complete and with an ending!
Reviewed in the United Kingdom 🇬🇧 on June 11, 2016
Verified Purchase
Excellent little novel. Good characters and fast moving plot.
Best of all, unlike most free books, it was complete and had an ending that did not stop in the middle of the action so that you have to buy the next book in the 'series' to find out how the first ended.
Read more
Report abuse
See all reviews