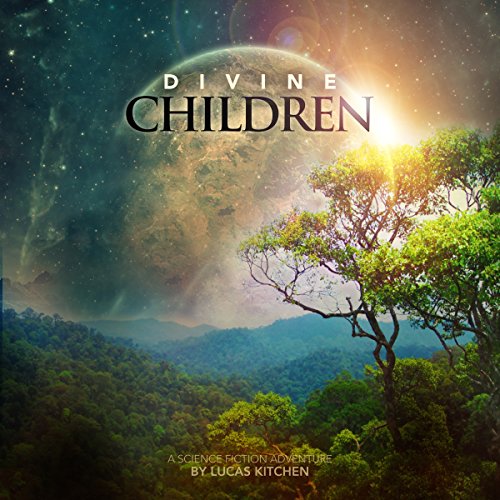 An aging star ship captain dies, leaving his massive vessel on a collision course with a nearby planet. Meanwhile, an unexpected object appears in the night sky. Ernst, a 19-year-old orphan in a primitive utopian dwelling tribe, offers to seek out council from the wizards across the sea. His people think he's crazy to even attempt such a dangerous journey, but he gains confidence when Enna, his unpredictable wild-haired friend joins the adventure.

Along the way he discovers that he possesses mysterious unexplained powers. Ernst and Enna must find a way to stop the late star ship captain's tyrannical successor, Huxley Bradford, before he intentionally destroys Ernst's entire race in a methodical act of genocide. The story takes a turn for the unexpected when these young heroes discover a forgotten secret about the world they thought they knew.

Ernst will either be broken by the journey or molded into the leaders he must be in order to save his people. Enter a rich world of colorful characters, layers of mystery, and powerful ideas.

Get 3 months of Audible for only $5.95/mo!
You get 3 credits and unlimited access to podcasts, originals and more.
Limited time offer! Get started
Learn more about membership
List Price: $26.40
You Save: $3.30 (13%)
By completing your purchase, you agree to Audible's Conditions Of Use and Amazon's Privacy Notice. Tax where applicable.
Sold and delivered by Audible, an Amazon company
Share

3.9 out of 5 stars
3.9 out of 5
19 global ratings
How are ratings calculated?
To calculate the overall star rating and percentage breakdown by star, we don’t use a simple average. Instead, our system considers things like how recent a review is and if the reviewer bought the item on Amazon. It also analyzes reviews to verify trustworthiness.

Penny
5.0 out of 5 stars Sci-Fi The Way it was Meant to Be
Reviewed in the United States 🇺🇸 on February 18, 2014
Verified Purchase
I am always on the lookout for Sci-Fi from authors with new voices. It’s not that I hate big publishing companies or the books they produce, but there is something really punk rock about reading a book that was published on a small scale by an entrepreneurial writer. I think it was how Sci-Fi was meant to be read. Indie Authors and Indie Publishing Companies often get a bum rap for bad formatting and editing, but that is certainly not the case with Kitchen’s book. The writing is slick and polished and produced in such a way that you hit that magical sweet spot of reading; you no longer see words on the page just images in your head. It’s good stuff.

This story comes together like a seven layer dip of futuristic drama and traditional parable. There are plenty of twists and turns that keep the plot fresh and unique; so be prepared to turn this novel into an all-night reading marathon. The subject matter is accessible for young adults, but not so juvenile that it won’t appeal to older readers as well. All in all, I was really impressed with this Sci-Fi gem, and I will be sharing it with my book club and the kids I work with at my local high school.

Retired Techie
5.0 out of 5 stars "What if" a Star Ship took 100 Generation to Reach its Destination?
Reviewed in the United States 🇺🇸 on August 9, 2016
Verified Purchase
Wow. A good description of the story by the author and several well-written reviews posted. What else can I add. Let's see....

My favorite kind of sci-fi are 'What if?" stories. This is now one of them for me. "What if" a huge star ship takes 100 generations of humans to reach their destination? What will their society (or societies) look like when they near the end of their journey? The author paints a well-rounded story of what could possibly happen to its inhabitants. Ernst and Enna travel to a 'magical' kingdom in search of answers to something growing in the skies at night that their elders cannot explain. They get their answers in an unexpected way.

The book is the complete story of how their space journey ends, but it could have a sequel? Like, how well will they survive in their new home? Is it already inhabited? (If so, are they friendly) Are the children's powers from being on the ship, or will they continue to have them on the planet?
Read more
2 people found this helpful
Report abuse

Bill Schindler
4.0 out of 5 stars Divine Children
Reviewed in the United States 🇺🇸 on January 18, 2020
Verified Purchase
The author weaves an interesting tale of a tribe with two young people who have no parents and are said to be the offspring of the Divine Mother. The youngsters are sent on a journey by the elders across a sea to a “advanced civilization “ where the rulers are cruel. The children are indeed divine but what does that actually mean? Read to understand the many meanings of what it is to be divine.
Read more
One person found this helpful
Report abuse

G. McFadden
5.0 out of 5 stars Great Early Lit Book
Reviewed in the United States 🇺🇸 on February 16, 2014
Verified Purchase
I started reading this, because my niece was coming to visit for President day. So we broke out the Kindles and went to Starbucks and sat outside and read this book. It was fun, well-written and great for my niece who is 13 years old. A great combination of sci-fi and fantasy. I truly loved this book and so did she. The writing and the development of the plot and the characters is very well done.
Read more
6 people found this helpful
Report abuse

shorty1715
5.0 out of 5 stars A must read!!!
Reviewed in the United States 🇺🇸 on February 15, 2014
Verified Purchase
I don’t normally like science fiction books, but my sister loved it so much I figured I would give it a try. Very happy that I did! This writer did such and amazing job with details so clearly that you could picture everything that was happening along with an intense story line makes for one heck of an awesome book! Amazing author!
Read more
4 people found this helpful
Report abuse
See all reviews