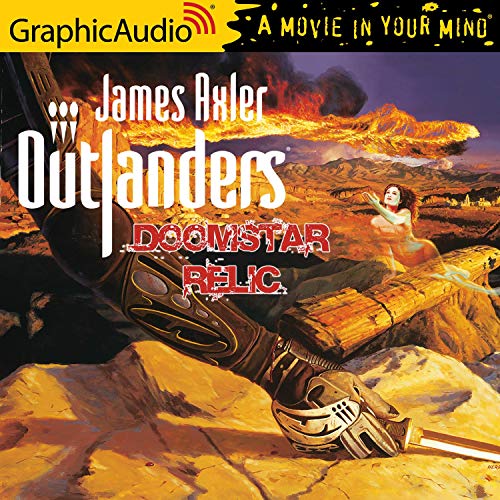 The passage of time hasn't healed the ravages of the nukecaust, but where once there was only the Deathlands, new centres of power loom above the domain of the unwanted, the hell zones of the Outlands. Though the outlanders distrust and hate the rulers of the fortified villes, even they wouldn't dare imagine the megalithic power guiding their destiny.

Born and bred as an enforcer of the villes, Kane is now a renegade who has seen enough of the truth to make him scared for the future. Along with his fellow exiles from Cobaltville, he must unravel the net of lies that has ensnared humanity. Now they must race to reverse an irresistible force unleashed by one man's quest for power.

In the outlands, there is nothing left to lose except the future....

5.0 out of 5 stars
5 out of 5
7 global ratings
How are ratings calculated?
To calculate the overall star rating and percentage breakdown by star, we don’t use a simple average. Instead, our system considers things like how recent a review is and if the reviewer bought the item on Amazon. It also analyzes reviews to verify trustworthiness.

michelle
5.0 out of 5 stars Excellent and unusual
Reviewed in Canada 🇨🇦 on February 10, 2004
I thought this was an excellent book with an unusual angle, focusing on the tragic love Roberta/Tara felt for the evil Barch.
The concept of a holographic assassin with particles of anti-matter mixed in with her energy field was very original.When Tara's primary programming kicked in and she and went on a slaughter spree against those who had been using her--yikes!
I really liked the way Brigid reached her by appealing to her human counterpart's broken heart.That part of it was a real tear-jerker.
This was a great book from the opening chapters in the steamy swamps of Louisana to the explosive climax in snowy Alaska.
Read more
Helpful
Report abuse
See all reviews

Pam
5.0 out of 5 stars thank
Reviewed in the United States 🇺🇸 on November 1, 2013
Verified Purchase
book was just like new and got it before the date it was to be here. great
Thank you very much.
Read more
Report abuse

Matthew
5.0 out of 5 stars Five Stars
Reviewed in the United States 🇺🇸 on January 29, 2016
Verified Purchase
Excellent book, should have bought it sooner.
Read more
Report abuse
See all reviews