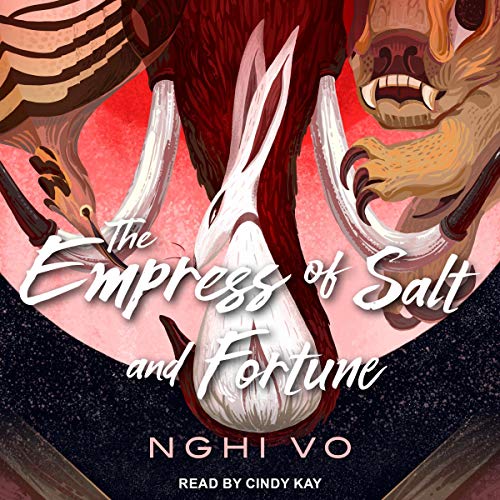 The Empress of Salt and Fortune: Singing Hills Cycle, Book 1

With the heart of an Atwood tale and the visuals of a classic Asian period drama, Nghi Vo's The Empress of Salt and Fortune is a tightly and lushly written narrative about empire, storytelling, and the anger of women.

A young royal from the far north, is sent south for a political marriage in an empire reminiscent of imperial China. Her brothers are dead, her armies and their war mammoths long defeated and caged behind their borders. Alone and sometimes reviled, she must choose her allies carefully.

Rabbit, a handmaiden, sold by her parents to the palace for the lack of five baskets of dye, befriends the emperor's lonely new wife and gets more than she bargained for.

At once feminist high fantasy and an indictment of monarchy, this evocative debut follows the rise of the empress In-yo, who has few resources and fewer friends. She's a northern daughter in a mage-made summer exile, but she will bend history to her will and bring down her enemies, piece by piece.

Our best offer yet
Get 3 months free!
Limited time offer. Get started
Learn more about membership
List Price: $13.15
You Save: $1.64 (12%)
By completing your purchase, you agree to Audible's Conditions Of Use and Amazon's Privacy Notice. Tax where applicable.
Sold and delivered by Audible, an Amazon company
Share

4.3 out of 5 stars
4.3 out of 5
2,160 global ratings
How are ratings calculated?
To calculate the overall star rating and percentage breakdown by star, we don’t use a simple average. Instead, our system considers things like how recent a review is and if the reviewer bought the item on Amazon. It also analyzes reviews to verify trustworthiness.
Top reviews

Sandy C
3.0 out of 5 stars Pretty slow paced - not my type of book
Reviewed in Canada on February 7, 2022
Verified Purchase
This book was very slow. There were hints at this being a wider world with deeper mystery and magic, but none of those hints really came to fruition - maybe they do in the sequels, but I'm not sticking around to find out. The pacing was slow and never quick and I did not become invested in any of the characters. They all seemed fairly shallow without any development throughout the story. For the last 1/3 of the book, I was struggling to get to the end and was happy when the last 20% was a sample chapter from another book so I could stop reading it and move on to something else.
Read more
Helpful
Report abuse

Anne V.
4.0 out of 5 stars Indirect
Reviewed in Canada on January 29, 2021
Verified Purchase
Much is said in this intense and tightly circumscribed story, but even more is implied or untold. It will be interesting to read the next book and see whether the cleric’s role expands or whether they remain observer only as in this tale.
Read more
One person found this helpful
Helpful
Report abuse

Nathaniel Luscombe
1.0 out of 5 stars Not my type
Reviewed in Canada on May 21, 2020
Verified Purchase
I thought the writing was a bit weak, the characters were underdeveloped, and the world was only a glimpse of something better. I might read the sequel because I want to see the writing grow but I most likely will leave these alone.
Read more
2 people found this helpful
Helpful
Report abuse

101mystic
5.0 out of 5 stars A good read
Reviewed in Canada on June 8, 2020
Verified Purchase
Quick and beautiful. The story comes together without much fuss. And the world building manages to sit in between realism and fantastical.
Read more
2 people found this helpful
Helpful
Report abuse

marika hirtle-lewis
4.0 out of 5 stars Sweet short story
Reviewed in Canada on January 24, 2021
Verified Purchase
This had lively story building in such a short story. I was immediately drawn in by the characters and world. I hope there are more stories coming from this world.
Read more
2 people found this helpful
Helpful
Report abuse
See all reviews

El H
5.0 out of 5 stars A unique novella that's impossible to put down
Reviewed in the United Kingdom on July 6, 2020
Verified Purchase
The Empress of Salt and Fortune is the kind of story that gets better the more times you read it, and the more time you let it live in your head and your heart. I was surprised by the way the story was told when I first opened it, but I bought into the narrative format immediately. The story of the Empress, In-yo isn’t told first hand. Instead, historical items and mementos are carefully logged and stories told about them, and it’s through those stories that In-yo’s tale unfolds. It broke up the story into bite-sized chunks, like a fairytale, and I loved that sense of being told the story instead of reading it firsthand.

The story itself is sad and poignant. The image of a lonely Empress being exiled as soon as her ‘use’ was up and the friendship that grew between In-yo and Rabbit was beautiful. The novella is only a little over 100 pages, but the characters are beautifully fleshed out and so well developed that I felt more emotionally connected to them than characters in some novels I’ve read. The narrative is tight and concise without a single word wasted to bring the reader along on Chih’s discoveries, and left me with a sense of genuine loss that the story was over. I can’t wait for the second story in this series so I can enjoy more storytelling from Chih’s unique perspective. Nghi Vo is a writer that I’ll be insta-buying from now on.
Read more
4 people found this helpful
Report abuse

Greatgreenbird
4.0 out of 5 stars Almost but not quite...
Reviewed in the United Kingdom on April 27, 2020
Verified Purchase
It feels as though I'm giving this book 4 stars and not 5 primarily because it's a novella and not novel-length, however I want to think there's more to it than that - in some ways, it's more about the nature of the way the story gets told, which didn't 100% work for me but I could see why the author had chosen to do it that way...

The Empress of Salt and Fortune is one of those books which initially looked like it would hit a large number of my buttons (once I'd overlooked the novella issue): non-European setting, outsider perspective and a talking bird to cap it all off. Mostly, it did what I wanted, using the main character of Rabbit to talk about what happened without ever really giving everything away as she did so and Chih as the character who gets to pick away at what doesn't quite fit. Any time there's a hoopoe involved too, I'm right there (they're one of my favourite birds), so the decision to make Almost Brilliant a bird of that species was going to be a winner all the way.

We never actually meet the eponymous Empress, only get to know her through the point of view of others: the servant who loves her, the minister who despises her for her foreignness, the items she has left behind which Chih is cataloguing. All we know initially is that she was sent from elsewhere to form an alliance, then exiled to this particular place when she had done her duty and produced a son and heir. What the author does cleverly at this stage is structure the storyline so that the outcome is inevitable but not obvious, with little details thrown in along the way to distract.

All in all, I enjoyed reading The Empress of Salt and Fortune and wished it had been longer, which is so often my lament where novellas are concerned. The other thing which didn't completely work for me was Chih's flat acceptance of everything they're told, which seemed at odds with their employment as an archivist. However, I hope the author is turning her hand to longer works and look forward to checking them out if she does. Apparently this is the first of a series, so we'll see...
Read more
3 people found this helpful
Report abuse

Emma M
5.0 out of 5 stars Beautiful and sad
Reviewed in the United Kingdom on January 9, 2021
Verified Purchase
This was a beautiful story about an Empress's and her serving girl who, with each others help, toppled and built empires.
The story is told to a Clerek, and their bird, by an elderly woman known only as rabbit.
Such a sad, sweet story, that had me in tears by the end. Yet still managing to remain somewhat hopeful, it is everything I love in a story.
Read more
One person found this helpful
Report abuse

Amazon Customer
5.0 out of 5 stars Excellent
Reviewed in the United Kingdom on December 6, 2020
Verified Purchase
A wonderful snack of a book with powerful imagery packed into each line of delicate prose. Moving and atmospheric I loved it.
Read more
2 people found this helpful
Report abuse

Phil
5.0 out of 5 stars when I tell you I cried
Reviewed in the United Kingdom on January 15, 2021
Verified Purchase
all hail the age of the novella yet again! this packs so much history and life in just 100 pages. there is an underlying melancholy to the story, but it doesn't detract from its beauty and cleverness
Read more
Report abuse
See all reviews