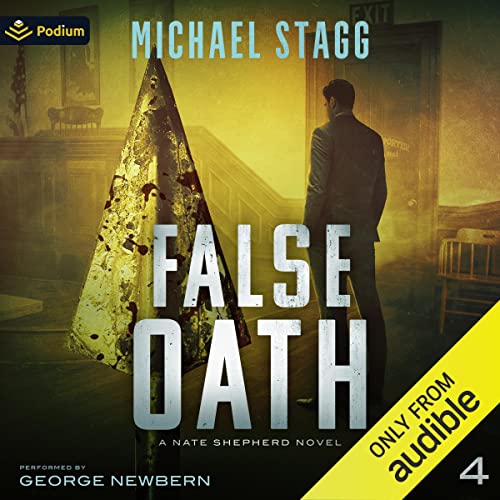 Two brothers. One accused of a horrific crime. The other chasing a golden future. And an attorney navigating between both.

Fresh off his latest case, Attorney Nate Shepherd takes in some local high school football, hoping that a Friday night under the lights will give him a chance to relax with his family. It does - until the quarterback’s brother is arrested in the middle of the game.

Nate jumps in to represent the brother, who stands accused of a crime far worse than anyone imagined. As the internet rains fury down on his new client and a merciless prosecutor maneuvers to put the young man away, Nate scrambles to find out what happened and why. But no one, anywhere, seems to be telling him the whole truth.

Nate struggles to build a defense, unwinding a spool of facts that threatens to spill over into his own family’s lives. And with each revelation, the conflict grows until a new danger arises.

Will their secrets tear the brothers apart?

Read more
©2021 Michael Stagg (P)2021 Podium Audio
Previous page
Next page
Learn more about membership
List Price: $43.85
You Save: $5.48 (12%)
By completing your purchase, you agree to Audible's Conditions Of Use and Amazon's Privacy Notice. Tax where applicable.
Sold and delivered by Audible, an Amazon company

4.5 out of 5 stars
4.5 out of 5
6,317 global ratings
How are ratings calculated?
To calculate the overall star rating and percentage breakdown by star, we don’t use a simple average. Instead, our system considers things like how recent a review is and if the reviewer bought the item on Amazon. It also analyzes reviews to verify trustworthiness.

Ann Campbell
5.0 out of 5 stars another great story
Reviewed in Canada 🇨🇦 on January 9, 2023
Verified Purchase
I enjoyed this one as much as the first 3 and am looking forward to the next one. Michael Stagg is a great storyteller.
Read more
Helpful
Report abuse

Calgary, Canada
3.0 out of 5 stars Not as good as first three.
Reviewed in Canada 🇨🇦 on August 18, 2021
Verified Purchase
Unfortunately when authors become successful there does not seem to be as much attention paid to character development et cetera. I missed the humour of the first three books.
Read more
One person found this helpful
Helpful
Report abuse
See all reviews

Stretch65
3.0 out of 5 stars Some curious lapses
Reviewed in the United States 🇺🇸 on August 10, 2021
Verified Purchase
This book was good, but not as good as the preceding books in the series. There are specific comments following.

First, there was an incident that the opposing counsel raised questioning a witness during the trial that had no foundation; even the witness asked the attorney during questioning how she could know that? Indeed, how? According to the recounting, the situation involved only three people, one of whom was dead, one who was on trial, and the witness testifying. As described, it was impossible for the the attorney to know any of the details, yet she quoted exact dialog. The author never explains how this was possible.

A large part of the defense concerned trajectories, yet the angle of penetration of the wound was never even mentioned. This would have been a material issue, even if the angle had not been determined, that would have reinforced the defense.

The entire case for the defense rested on the residence of the defendant and his brother, the nationally ranked high school quarterback. It is simply not credible that no one noticed that he wasn't living in the right state. Certainly his father knew, and that aspect was never addressed, even if it were that his father was complicit in this as well.

Lastly, a top ten nationally ranked quarterback would be besieged with schools, agents, influencers, hangers-on, ad infinitum, yet this aspect of the situation is treated with such lack of verisimilitude that the story suffers. Of course, that makes the story more messy and harder to write, but to ignore this strains credulity.

All in all, a good read, but there are noticeable lapses.
Read more
4 people found this helpful
Report abuse

Kindle Customer
3.0 out of 5 stars Not the author's best novel........
Reviewed in the United States 🇺🇸 on December 1, 2021
Verified Purchase
An interesting plot, but not the author's best novel, that I have read. I have a difficult time believing that Tyler could have been living outside of the school district for several months, especially at his mother's home, and no one ever noticed? Tyler was not a recluse, he was the team's leader and had to have some kind of high school social life with his school and team mates and yet, no one in the football community ever noticed a high profile quarterback was not living with his dad, while traveling between two states every school day. Nice try, but too thin of an out, to be a real out for the novel.
Read more
One person found this helpful
Report abuse

Elizabeth
5.0 out of 5 stars Watch for the interjections
Reviewed in the United States 🇺🇸 on September 16, 2022
Verified Purchase
I have enjoyed reading the Nate Sheppard books. My favorite thing is when you are reading along all of a sudden the author interjects little passages directed to the reader. If you are looking for a new author give Michael Stagg a try. I don’t believe you’ll be disappointed.
Read more
2 people found this helpful
Report abuse

johnverp
3.0 out of 5 stars Good, but not as strong as the prequels
Reviewed in the United States 🇺🇸 on July 28, 2021
Verified Purchase
This is another engaging novel in the series, but not as strong as those before it. Much of the first half of the book is spent on sport and family time, so is much slower than what follows. The courtroom time does lift the pace considerably and there is enough in the plot to keep the reader guessing throughout. That said, I must say that some story ingredients baffled me — not only are some obvious questions not asked, but two prime characters don't appear in any meaningful way until very, very late in the piece. (I have stayed a little evasive to avoid offering a spoiler). Overall, though, a Stagg novel, with Nate as our protagonist, beats a lot of what is out there in this genre.
Read more
Report abuse

Amazon Customer Greg.
5.0 out of 5 stars Excellent Read
Reviewed in the United States 🇺🇸 on July 26, 2021
Verified Purchase
Michael Stagg continues to excel with another engaging legal mystery. Everything about the plot, the characters, and the dialogue rings true. It's a genuine page-turner that will keep you involved until the last page. Highly recommended!
Read more
2 people found this helpful
Report abuse
See all reviews