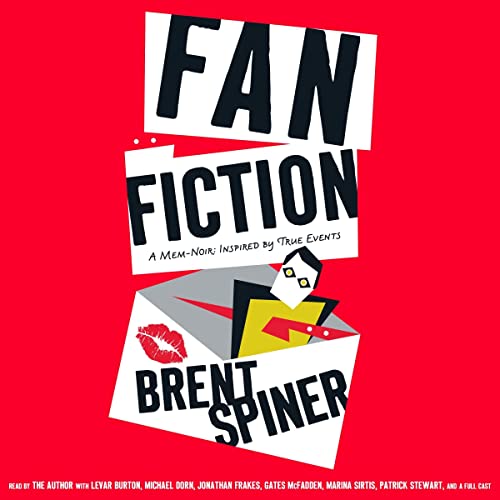 "A key to the audiobook’s success for fans is its all-star cast — a strong advantage here for audio over print. When a “Next Generation” cast member speaks in 'Fan Fiction,' from Patrick Stewart to Marina Sirtis, it’s that actor’s actual voice you’re hearing." - The Providence Journal

Brent Spiner’s explosive and hilarious novel is a personal look at the slightly askew relationship between a celebrity and his fans. If the Coen Brothers were to make a Star Trek movie, involving the complexity of fan obsession and sci-fi, this noir comedy might just be the one.

Set in 1991, just as Star Trek: The Next Generation has rocketed the cast to global fame, the young and impressionable actor Brent Spiner receives a mysterious package and a series of disturbing letters, that take him on a terrifying and bizarre journey that enlists Paramount Security, the LAPD, and even the FBI in putting a stop to the danger that has his life and career hanging in the balance.

Featuring a cast of characters from Patrick Stewart to LeVar Burton to Trek creator Gene Roddenberry, to some completely imagined, this is the fictional autobiography that takes listeners into the life of Brent Spiner, and tells an amazing tale about the trappings of celebrity and the fear he has carried with him his entire life.

Fan Fiction is a zany love letter to a world in which we all participate, the phenomenon of “Fandom.”

4.4 out of 5 stars
4.4 out of 5
471 global ratings
How are ratings calculated?
To calculate the overall star rating and percentage breakdown by star, we don’t use a simple average. Instead, our system considers things like how recent a review is and if the reviewer bought the item on Amazon. It also analyzes reviews to verify trustworthiness.

Laura BB
4.0 out of 5 stars Strange but entertaining
Reviewed in Canada 🇨🇦 on July 29, 2022
Verified Purchase
Cool kind of experimental memoir/mystery. It's not the most tightly written book of all time, and the plot is a little wacky, but the humor, Hollywood and Star Trek tidbits, and emotional confession make it an interesting read.
Read more
Helpful
Report abuse

Damian
5.0 out of 5 stars Awesome book I couldn't put it down.
Reviewed in Canada 🇨🇦 on November 24, 2021
Verified Purchase
I really enjoyed this book. I liked that some of the chapters were short really appealing to my A.D.D. I really hope Brent writes more. I wish it was longer so I had more of it to read, maybe I'll have to read it again.
Read more
Helpful
Report abuse

Dennie
5.0 out of 5 stars Witty and heartfelt
Reviewed in Canada 🇨🇦 on May 23, 2022
Verified Purchase
Fantastic read, lots of laughs and a few tears.
Read more
Helpful
Report abuse

MG
2.0 out of 5 stars Kind of disappointing dark and odd fictional tale very loosely based on actors carreer.
Reviewed in Canada 🇨🇦 on October 27, 2021
It is advertised as a fictional tale very loosely based on his acting career but Brent Spiner is such a funny and entertaining guy at Conventions and in interviews so I was pretty disappointed that the story is so odd and told with such a dark sense of humour. The most interesting chapter to me was the prologue where he documents truthfully the beginning of his carreer. Would have loved and preferred an actual biography on his life and carreer and his experience on Star Trek. Sorry but just not my cup of tea.
Read more
One person found this helpful
Helpful
Report abuse
See all reviews

Jim J-R
4.0 out of 5 stars A chaotic comedy
Reviewed in the United Kingdom 🇬🇧 on February 6, 2022
Verified Purchase
Brent Spiner, the actor who played/plays the Android Data and his family in Star Trek, pens the tale of a man named Brent Spiner, an actor who plays the Android Data in Star Trek, in the early 1990s, as he receives threatening letters and lives a confusing life.

The narrative is what this book is really all about. It paints a fascinating satire of life as a TV star, with larger than life colleagues, and a weird Hollywood world moving around you. But also of a man clearly too tired to be in any sort of control of his life.

The plot is chaotic, but somehow doesn’t really seem the point. There’s an element of whodunnit, but apart from a couple of pieces of beautiful misdirection it’s really just a sideshow for the narration, which is where the humour and love shows.

A fun adventure of a novel, likely only made possible by Spiner himself serving as the author, as the insights, teasing, and self-deprecation would feel wrong coming from anyone else.
Read more
Report abuse

Amazon Customer
5.0 out of 5 stars Brilliant read.
Reviewed in the United Kingdom 🇬🇧 on March 19, 2022
Verified Purchase
Being a long time Brent Spiner fan, I just had to get this!! Very well written and easy to read. Not many books you can read from cover to cover in one go. But it is funny, sharp and witty. Gives an insight to how fandom works from an actor's point of view. Loosely based on actual events. But all in all a very good read, couldn't put it down once started.
Read more
Report abuse

M. Phillida Workman
5.0 out of 5 stars Very funny!
Reviewed in the United Kingdom 🇬🇧 on March 11, 2022
Verified Purchase
This is very funny with a good mystery as well. Laughed out loud in places. A must for Star Trek fans😉
Read more
Report abuse

Mr J Green
4.0 out of 5 stars Requested as a present by a relative
Reviewed in the United Kingdom 🇬🇧 on January 3, 2022
Verified Purchase
Came quickly and as anticipated , well received present.
Read more
Report abuse

Chiara Sabatini
5.0 out of 5 stars Really beautiful
Reviewed in Italy 🇮🇹 on November 3, 2021
Verified Purchase
This is the story of an actor and of his relationship with his fans. Some of them are very normal people, but unfortunately others not. So he must find even a bodyguard to protect himself from one crazy fan. This book seems a movie, the rhythm is very fast, the events run towards the conclusion. And, you can find all the cast of Star Trek TNG. It is often hilarious, but you must think about the excesses which some fans reach. I recommand this book not only to all the trekkies or trekkers, but also to everybody. It isn't a too difficult level of English.
Read more
Report abuse
See all reviews