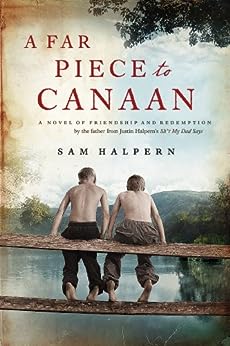 A Far Piece to Canaan: A Novel of Friendship and Redemption Kindle Edition

by Sam Halpern (Author) Format: Kindle Edition
See all formats and editions
Sorry, there was a problem loading this page. Try again.

A Far Piece to Canaan is a warm and nostalgic novel from an unexpected source: Sam Halpern, whose salty paternal wisdom made Justin Halpern’s Sh*t My Dad Says a phenomenal bestseller.

Inspired by Sam Halpern’s childhood in rural Kentucky, A Far Piece to Canaan tells the story of Samuel Zelinsky, a celebrated but troubled former professor who reluctantly returns after his wife’s death to the Kentucky hills where he lived as a child to reconnect with long-buried memories and make good on a forgotten promise.

A tale of superstition, secrets, and heroism in the postwar South, A Far Piece to Canaan: A Novel of Friendship and Redemption is the surprising and moving debut of a gifted storyteller.

Sam Halpern is the legendary father of Justin Halpern, author of the phenomenal #1 New York Times bestseller Sh*t My Dad Says. A professor of nuclear medicine, he lives in southern California.

Celebrated retired professor Samuel Zelinsky reluctantly leaves New Hampshire after his wife's death to visit a farm in the Kentucky hills where he lived as a child. The son of sharecroppers, Samuel has long since left that life behind—yet now he must reconnect with long-buried memories to fulfill a childhood promise to a friend.

In 1945, Sam and his best friend, Fred Mulligan, visit the Blue Hole, a legendary pool on the Kentucky River where the hill people believe an evil force lurks. Along with a couple of neighbor boys, they discover the body of a dog, surrounded by twisted human footprints—and a cave that offers further evidence that something terrible has transpired. Fearing they'll be punished for their trespasses, the boys initiate a series of cover-ups and lies that eventually leads to a community disaster.

When the Zelinskys move, Fred and Samuel promise each other that if either calls, the other will come to his aid. But Samuel's failure to keep his promise has lasting consequences he could never have predicted. Now, decades later, he confronts his failures and attempts to redeem himself, finally achieving peace through his late return to Canaan land.

4.6 out of 5 stars
4.6 out of 5
160 global ratings
How are ratings calculated?
To calculate the overall star rating and percentage breakdown by star, we don’t use a simple average. Instead, our system considers things like how recent a review is and if the reviewer bought the item on Amazon. It also analyzes reviews to verify trustworthiness.
Top reviews

Luanne Ollivier
#1 HALL OF FAMETOP 500 REVIEWERVINE VOICE
3.0 out of 5 stars Coming of age and redemption
Reviewed in Canada on June 5, 2013
3.5/5 A Far Piece to Canaan is not my usual reading fare. But I was extremely curious to read it, as Sam Halpern is the father of Justin Halpern - author of S*** My Dad Says. Could the same dad with the somewhat foul mouth and no filter really write a book befitting such a bucolic cover?

English Professor Samuel Zelinsky's wife Nora has just died of cancer. Before her death, she made Sam promise to return to the hills of Kentucky where he spent part of his youth. Sam has never really talked about those years, growing up as the son of sharecroppers, but somehow Nora knew he had unfinished business. And Sam honours that promise.

As Sam tours through his childhood haunts, the narrative switches back to 1945 and we meet ten year old Sam and his soon to be best friend Fred Cody Mulligan. Halpern does an admirable job in bringing this time and space to life. His descriptive prose bring to life the croak of frogs, the sweetness of an apple and the coolness of a mountain stream. But not everything is idealic - there is something evil lurking around the bottomless Blue Hole. Local superstition says it's the devil, but the boys find evidence that the evil is human. This event is the catalyst for what transpires, shapes and changes the lives of Sam, Fred and their two friends. For me, A Far Piece to Canaan had a very 'Stand By Me' feel to it.

We are transported back and forth from past to present as Sam tries to come to terms with his actions in the past and make reparations in the present.

About halfway through the book, I wondered about there really being Jewish sharecroppers in Kentucky in the 1940s. It was only as I searched our more about the author that I discovered that this was truly Sam Halpern's life. He was that Jewish sharecropper's kid in Kentucky. (Read the full interview here at Tablet Magazine.) And upon discovering that I looked at the book with a different set of eyes in the second half.

For Halpern is writing what he knows, what he lived and what he remembers. "Like every novel, it's a mixture of fact and fiction. Much of the description of central Kentucky and the life of the sharecroppers are real." It is this 'insider' knowledge that gave the book such a real feel.

I enjoyed the character of Sam and his description of day to day life. The supporting cast of characters were just as well drawn. I did have a bit of problem accepting the reason the boys 'won't tell', as well as Sam's relationship with Ben and the need to keep it a secret.

Some of the vernacular used was easy to decipher. Hit'll for It will I got, wudn't for would not, but some words I had to guess at. Hun'ney for honey? It is only used by one ten year old boy talking to the other and seemed a bit odd. It seemed a bit hit or miss, with some words that would be easily contracted being spelled out fully such as old (ole) and just (jes'). Minor quibble.

For this reader, the best part of the book was set in the past. I found the 'redemption' part of the story in the last few chapters didn't hold my interest as well (I thought it was a bit too saccharine)

All in all, an admirable debut. And much different than I expected!
Read more
Helpful
Report abuse
See all reviews

Alexander Shapiro
5.0 out of 5 stars a must read (you learn alot!)
Reviewed in Germany on June 15, 2016
Verified Purchase
An excellent book written by a fine person! You Sir are what I only can describe as the Salt of the Earth. They don't make them like you anymore. You need to write more books Sir. I can't speak for everyone (I am not running for office) but if you write another book Sir, make sure these greedy Amazon guys send me a link. Again, thanks and G-d bless you!
Read more
Report abuse

Robert
5.0 out of 5 stars You've got to get to end!
Reviewed in the United States on June 27, 2020
Verified Purchase
For full impact, you've got stay all the way to the end. A older man walking you through an eventful year of his life with his best friend - when they were 11 years old. And interesting adventure. But as is sometimes the case with primary characters in that age range, it didn't fully register with me. At least until the last third and especially the finish when it shifts mainly to the man's present day. Something kept compelling to continue on with the book, even when I was about loose interest. If that happens to you, keep reading. It sure registered emotionally with me at the end. Perhaps it will for you as well!
Read more
2 people found this helpful
Report abuse

claire8800
4.0 out of 5 stars Outstanding...until the end
Reviewed in the United States on May 23, 2020
Verified Purchase
I've never been an adolescent boy in Kentucky, but I could identify with Halpern's intense examination of a boy's hardest years, and the way those few years set the course of his next six decades. I lived through everything with him, including (and especially) his return, late in life, to grapple with the issues he had fled. I was a little disappointed with the neat way things wrapped up---real life seldom brings things to such a satisfying conclusion---but I also couldn't help being glad that Samuel got a second chance. This book and its inhabitants will stay with me for a long time.
Read more
4 people found this helpful
Report abuse

John E. Downing
5.0 out of 5 stars Wonderful story about growing up in rural Kentucky and its values
Reviewed in the United States on September 25, 2017
Verified Purchase
Samuel Zelinsky was a sharecroppers son who grew up on a farm in southern Kentucky in the 1940s. His family and neighbors were all poor, hard-working and lived by a strict code of conduct which stressed responsibility for yourself your friends and your family. You kept your word and stood by your friends.he had some very unusual adventures growing up, and finally was able to get an education and had a distinguished academic career. 60 years after he left Kentucky, he went back to where he grew up to to try to correct some mistakes and shortcomings from his childhood. I grew up in rural Kentucky and the stories brought back many memories. Very authentic description of ethics and attitudes in that time and place.Highly recommended.
Read more
4 people found this helpful
Report abuse

Abril Goforth
5.0 out of 5 stars Compelling
Reviewed in the United States on September 14, 2016
Verified Purchase
I really enjoyed reading this novel by Sam Halpern. The dialogue, especially in the recollections of the young narrator, was excellent. The descriptions in the story were vivid. The story itself is compelling. I was not as impressed with the sections of the book that were written from the perspective of the "current day" narrator - the boy has a now old man. Sometimes it seemed as this piece was added at the insistence of the editor, perhaps to lengthen the book or make it more interesting to adult readers. The book would have been just fine without that. It stands alone as a great coming-of-age piece.
Read more
7 people found this helpful
Report abuse
See all reviews
Back to top
Get to Know Us
Make Money with Us
Amazon Payment Products
Let Us Help You
EnglishChoose a language for shopping. CanadaChoose a country/region for shopping.
© 1996-2022, Amazon.com, Inc. or its affiliates