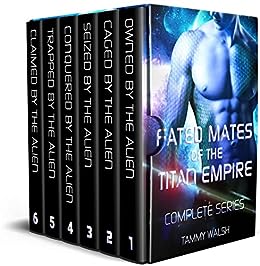 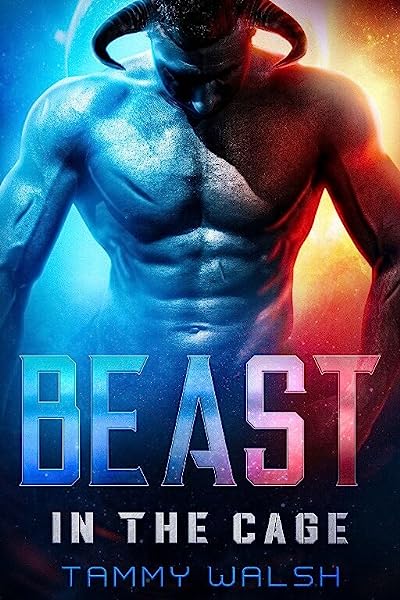 by Tammy Walsh (Author) Format: Kindle Edition
See all formats and editions
Sorry, there was a problem loading this page. Try again.

GET ALL 6 BOOKS IN THE FATED MATES OF THE TITAN EMPIRE SERIES IN 1 COMPLETE BOX SET.

OWNED BY THE ALIEN

Abducted by aliens and bound for a breeding zoo.
And then things got worse.

I was abducted by aliens.
Yep, you heard me right.
Aliens.
But they’re not little green men.
They’re gorgeous creatures called Titans.
Heaven help me.

Hard. Callous. Cruel.
That’s how the crew describe their captain.
After their attempted mutiny, he comes to me for aid.
Help him recover from their poison and he’ll return me to Earth.

Healing requires the use of my body for one whole night.
If I give him what he needs, will he keep his word?
And will sleeping with him make me his fated mate for all time?

CAGED BY THE ALIEN

I’m trapped in a room with an alien Adonis.
And 100 billion viewers are watching.

Two weeks ago, I was abducted by aliens. Now I’m trapped in a room with four walls and no door. I’m scared. I’m alone. And there’s no chance of escape.

Then he appears out of nowhere. A Greek god with an ass to match. We try to escape but our efforts are thwarted. In a moment of weakness, we kiss.

The next morning, a door appears.

We’re trapped in a depraved gameshow. If we can reach a shuttlecraft within 24 hours, we can escape together. But first, we have to give the producers the steamy show they want.

SEIZED BY THE ALIEN

I’m lost in space and will do anything to return home.
Even sacrifice the ones I love?

I’m lost in the galaxy. I have no money and no friends. I’m desperate to return home and I’ll do anything to get there.

That’s when I meet Traes.

He’s cold and distant. He’s a tyrant ruling over his empire. But in his eyes I see his repressed passion. It’s there every time he looks at me. I want to break him down and tear him up. I’m gonna make him beg for what I know he wants. But the closer I get to him, the more I want to stay.

There’s an opportunity for me to return home but it comes at a terrible price. Am I willing to sacrifice the ones I love to secure the journey home?

CONQUERED BY THE ALIEN

A rich Titan bought me.
Now I have to prove my worth.

I was abducted by aliens and sold cheap to a high-class matchmaking company. I’m paired with a hot bad boy Titan with a serious chip on his shoulder. He makes me a deal: Pretend we’re in love so he can keep his inheritance, and he’ll send me home.

But there’s a problem.

There’s more to him than meets the eye, a depth even he doesn’t know he has. Can I keep my hands to myself? Can I treat this like the business relationship it is? Or will I get too close and replace that chip with a feral kiss?

TRAPPED BY THE ALIEN

I was abducted by aliens. Yes. Aliens. But they don’t want to probe me. They need me for a mission. It’s my job to learn where a hot lord’s loyalty lies… By any means necessary.

My target is cold, brash, and abrasive, but it’s all a mask. Underneath that polished veneer lies a dark secret, one that threatens to shake me to my very core.

Can I resist falling in love with him before I learn the truth? And when given the choice, will I choose him or home?

CLAIMED BY THE ALIEN

Burned halfway to hell.
And she brought me back.

I’m broken after losing my throne and getting burnt half to death. I was careless, reckless. I don’t deserve to be the emperor. I should curl up and die.

But Hazel won’t let me.

She’s a talented healer who nurses me back to health.
She teaches me kindness, friendship, and love.
She’s everything I wanted, but never knew I needed.
She’s my fated mate and I can never let her go.

Get my EXCLUSIVE stand-alone novel MY ALIEN WARRIOR SOULMATE free at my website: tammywalsh.com/my-alien-warrior-soulmate

In space, no one can hear you scream...

And where’s the fun in that?

I've been reading romance and science fiction my whole life. I always wondered why those genres hadn’t been a mash-up years ago and now I'm super excited I get to combine them into a single steamy encounter!

Come with me as we journey through space and time… and the most gorgeous set of hunks this side of the galaxy!

Get my EXCLUSIVE stand-alone novel MY ALIEN WARRIOR SOULMATE free at my website: tammywalsh.com/my-alien-warrior-soulmate

4.4 out of 5 stars
4.4 out of 5
62 global ratings
How are ratings calculated?
To calculate the overall star rating and percentage breakdown by star, we don’t use a simple average. Instead, our system considers things like how recent a review is and if the reviewer bought the item on Amazon. It also analyzes reviews to verify trustworthiness.
Top reviews

Anne-Marie S.
5.0 out of 5 stars Love and danger abounds
Reviewed in Canada on July 21, 2022
Get not one, but five complete stores of feisty heroines and their alien mates! A book full of adventure, danger, action, twist and of course enough love to keep you entertained for awhile.
Read more
One person found this helpful
Helpful
Report abuse

LBing
5.0 out of 5 stars Great reading escape
Reviewed in Canada on July 20, 2022
Verified Purchase
This was a great collection of stories that made for some real binge reading fun ;D Expect well written stories with interesting characters, a ton of action, some mystery and, at times, intense and emotional situations. Of course, can't I forget there's steamy romance, as well ;P All great fun and a fab reading escape.
Read more
One person found this helpful
Helpful
Report abuse
See all reviews

BossAngel
5.0 out of 5 stars Fated Mates of the Titan Empire - Six Engaging Stories
Reviewed in the United States on July 20, 2022
Verified Purchase
Six engaging stories that's full of action and steamy romance. I had read some of the stories contained within this box set so this allowed me to catch up on the rest of this series. Some of the stories I enjoyed more. I liked the characters and their interactions; the world building was detailed and the storylines engaging to read. This book set starts with Owned by the Alien, one I hadn't read and ends with Claimed by the Alien.
Owned by the Alien
This story is about Alice and Nighteko's romantic adventures. Nighteko is an alien smuggler and he's on Earth to abduct human females to sell. Alice is her friend's maid of honor and designated driver. They are out to celebrating the bachelorette party. Her friends have a challenge to find the hottest guy. Then she spies a hot guy at the bar. She goes and talks with Nighteko when the fire alarm goes off. Outside her friends decide to go home and on the drive home, Nighteko abducts them. Alice tries to change Nighteko mind, and he keeps her, but her friends get sold and this starts this series.
The other stories involve her friends- Mandy, Vicky, Bianca, Hazel and Sirena and their romantic adventures.
Read more
2 people found this helpful
Report abuse

Kindle Customer
5.0 out of 5 stars Titan Fated Mates boxed set
Reviewed in the United States on August 4, 2022
Verified Purchase
This set has six stories. Each one is a complete story but they are all connected and best read in order. Plenty of steam and happily ever afters.
Book 1: Owned by the Alien is the story that sets up the series. Alice and her friends are abducted after their hen night. Nighteko is a Titan smuggler who took the girls. When Alice awakes on his ship before her delivery she helps him against his mutinous crew.
Book 2: Caged by an Alien is Maddy's story. She wakes in a strange room with no door. After a day, she wakes to find Chax, a Titan male in the room with her. Soon they find out that they are in a deadly game show. They have to beat the challenge to stay alive and soon find out that there is a much bigger problem to solve.
Book 3: Seized by the Alien is Bianca's story. She wakes up in a dingy house as a slave. She makes her escape. She gets herself on another planet and trying to get a job to save money to go home to Earth. She finds a job as a Governess for Traes and his nephew, Cleb. As Bianca teaches Traes how to reconnect with Cleb, they start to fall for each other. When her former "Master" catches up with her and Cleb, it could spell disaster for all of them.
Book 4: Conquered by the Alien is Vicky's story. Dryel is a party boy in danger of losing his inheritance. He buys her from a matchmaking service to try and convince his mother that he has changed. When the lies catch to them things hit a breaking point.
Book 5: Trapped by the Alien is Sirena's story. She is captured by the Changelings. The Titans are captured by the Changelings. She is tasked with getting close to Kal, who is curremtly the highest ranking noble Titan in the Empire. The Changelings want to know if his alligence is to his people or the Changelings. As they get closer, her task get more difficult.
Book 6: Claimed by the Alien is Hazel's story. Fiath is the Titan Emperor and he is attacked. He ends up in Hazel's care in a nearby Titan vilage. Due to severe scars, nobody recognizes him. She cares for him as the rest of the Empire mourns thinking he is dead. As he recovers, they try to help the resistance against the Changelings.
This final book pulls it all together. Great story.
Read more
One person found this helpful
Report abuse

Kindle Customer
5.0 out of 5 stars Excellent stories
Reviewed in the United States on August 11, 2022
Verified Purchase
Very Good stories. Some with exciting moments, others with slower pace, but just as interesting. Thanks for a good imagination.
Read more
One person found this helpful
Report abuse

Amazon Customer
5.0 out of 5 stars Easter eggs abound
Reviewed in the United States on August 19, 2022
Verified Purchase
This series has great Easter eggs to obscure and more pop culture, and one of my favorite movie lines of all time was nearly adapted for this series. Gorgeous, vibrant, and imaginative are the words I use to deduce this series. If you love badges women, scifi, and Hot steamy lovin', you will enjoy this series.
Read more
One person found this helpful
Report abuse
See all reviews
Report an issue
Does this item contain inappropriate content?
Report
Do you believe that this item violates a copyright?
Report
Does this item contain quality or formatting issues?
Report