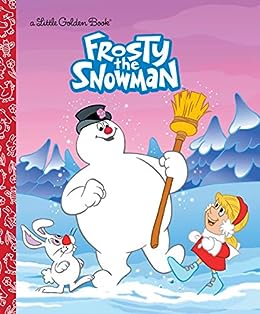 by Diane Muldrow (Author), Golden Books (Illustrator) Format: Kindle Edition
Part of: Little Golden Book (504 books)
See all formats and editions
Sorry, there was a problem loading this page. Try again.
Celebrate the holidays with everyone's favorite snowman with a magic hat, a button nose, and eyes made out of coal!

Based on the beloved 1969 television special, this timeless classic Little Golden Book retells the whole magical story of Frosty the Snowman. A perfect Christmas gift for boys and girls 2–5!
Read more
Previous page
Next page

Diane Muldrow is the author of the New York Times bestselling Everything I Need to Know I Learned From a Little Golden Book series, and an editorial director at Golden Books. She has written dozens of children’s books, including We Planted a Tree, a 2010 Chicago Public Library Best of the Best selection, and a Bank Street Best Children's Book of the Year. Diane is the editor of Golden Legacy: The Story of Golden Books by Leonard Marcus.

In 1942, the launch of Little Golden Books revolutionized children’s book publishing by making high-quality picture books available at affordable prices. More than 60 years later, many of the original Golden Book titles are still wildly popular, with The Poky Little Puppy topping the list of ten bestselling children’s books of all time. Golden Books’ backlist is teeming with classics such as Dorothy Kunhardt’s Pat the Bunny, and features the stories and artwork of children’s book legends Mary Blair, Margaret Wise Brown, Richard Scarry, Eloise Wilkins, Garth Williams, and many more. Today, the Golden Books imprint includes an array of storybooks, novelty books, and coloring and activity books featuring all of the most popular licenses, including Disney, Nickelodeon, Barbie, Thomas & Friends, The Cat in the Hat, Sesame Street, Marvel Super Heroes, and DC Super Friends. Golden Books continues to reissue the best of its backlist in a variety of formats, including ebooks and apps, as well as bringing out brand-new books in these evolving new formats. --This text refers to an out of print or unavailable edition of this title.

4.8 out of 5 stars
4.8 out of 5
1,888 global ratings
How are ratings calculated?
To calculate the overall star rating and percentage breakdown by star, we don’t use a simple average. Instead, our system considers things like how recent a review is and if the reviewer bought the item on Amazon. It also analyzes reviews to verify trustworthiness.
Top reviews

Tams
5.0 out of 5 stars Perfect for Christmas!
Reviewed in Canada on October 24, 2020
Verified Purchase
Wanted this as a gift. Had bought a second hand one on here but it was all marked up. Wasn't gift quality. Only paid a bit more for new this time and I am beyond happy. We're making this Christmas the BEST.
Read more
Helpful
Report abuse

niksgarci
TOP 1000 REVIEWER
5.0 out of 5 stars Golden!
Reviewed in Canada on November 19, 2019
Verified Purchase
A classic little golden book to enjoy with the kids.

This collection never lets us down, and has the kids reaching for them again and again; even as they get older.

Kassandra
5.0 out of 5 stars Classic story
Reviewed in Canada on October 24, 2021
Verified Purchase
Your classic frosty the snowman book that I loved reading as a child and enjoy reading with my children now.
Read more
Helpful
Report abuse

Carly
3.0 out of 5 stars A Christmas classic
Reviewed in Canada on December 28, 2021
Verified Purchase
A classic story, perspective for Christmas and winter reading, the book is a little stiff needed some wiggling
Read more
Helpful
Report abuse

Marilyn Williams
5.0 out of 5 stars Frosty the Snowman
Reviewed in Canada on August 26, 2020
Verified Purchase
I bought this book for my great-grandchild arriving at Christmas. Loved it!!
Read more
Helpful
Report abuse

Claudio
5.0 out of 5 stars Brings back memories!
Reviewed in the United Kingdom on June 8, 2015
Verified Purchase
Great book for my son!
Read more
Report abuse

Melinda
5.0 out of 5 stars Classic!
Reviewed in the United States on October 18, 2019
Verified Purchase
We purchased this book to add to our Christmas collection! We wrap each book and read one a night during the month of December! A great Family Tradition and would not be complete without this classic story! Love that we can read this story in addition to watching the TV showing!
Read more
4 people found this helpful
Report abuse

Kimberly B
2.0 out of 5 stars Black mark on page
Reviewed in the United States on November 19, 2019
Verified Purchase
My copy had a black smear on one of the pages, so my book should have been in the discount pile or something, not full price for an imperfection. I’d overlook an imperfection on most books, but something about a traditional Christmas book I paid full price for makes me want it to be perfect.
Read more
2 people found this helpful
Report abuse

Maude
4.0 out of 5 stars My daughter loves Frosty and this was a hit
Reviewed in the United States on April 27, 2014
Verified Purchase
My 3-year-old daughter is a big Frosty fan, and she very much enjoyed this little book. It is short enough to read for bedtime and it has recognizable drawings. My daughter asked me why the lyrics of the song were not included at all in the words so it may be good for other potential buyers to know that this is not a "sing-a-long" book; rather, it tells the story of how the snowman came to be, how the magician tries to catch the snowman, etc.
Read more
12 people found this helpful
Report abuse
See all reviews
Back to top
Get to Know Us
Make Money with Us
Amazon Payment Products
Let Us Help You
EnglishChoose a language for shopping. CanadaChoose a country/region for shopping.
© 1996-2022, Amazon.com, Inc. or its affiliates