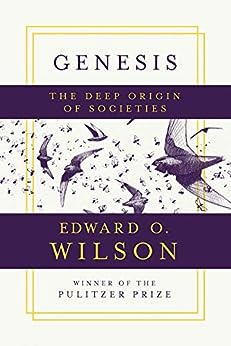 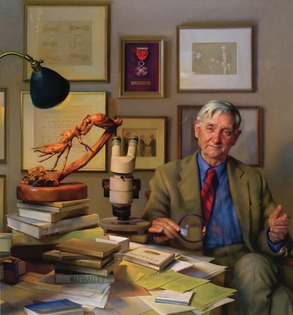 by Edward O. Wilson (Author) Format: Kindle Edition
See all formats and editions
Sorry, there was a problem loading this page. Try again.

An “endlessly fascinating” (Michael Ruse) work of scientific thought and synthesis, Genesis is Edward O. Wilson’s twenty-first-century statement on Darwinian evolution. Asserting that religious creeds and philosophical questions can be reduced to purely genetic and evolutionary components, and that the human body and mind have a physical base obedient to the laws of physics and chemistry, Wilson demonstrates that the only way for us to fully understand human behavior is to study the evolutionary histories of nonhuman species. At least seventeen of these species—among them the African naked mole rat and the sponge-dwelling shrimp—have been found to have advanced societies based on altruism and cooperation. Braiding twenty-first- century scientific theory with the lyrical biological and humanistic observations for which Wilson is beloved, Genesis is “a magisterial history of social evolution, from clouds of midges or sparrows to the grotesqueries of ant colonies” (Kirkus Reviews, starred review).

The acclaimed naturalist delivers a pithy summary of evidence for Darwinian evolution of human behavior.... A magisterial history of social evolution, [and] lucid, concise overview of human evolution that mentions tools and brain power in passing but focuses on the true source of our pre-eminence: the ability to work together.—Kirkus Reviews [starred review]

Wilson (On Human Nature), a Pulitzer Prize winner and Harvard evolutionary biologist, addresses what he calls the six “great transitions of evolution” that led to human society in this ambitious treatise, his 32nd book.... He does an impressive job in this short text of making the nature of the transitions clear.” —Publishers Weekly

Genesis is a beautifully clear account of a question that has lain unsolved at the core of biology ever since Darwin: how can natural selection produce individuals so altruistic that, rather than breeding themselves, they help others to do so? —Richard Wrangham, author of The Goodness Paradox

In his characteristically clear, succinct, and elegant prose, one of our grand masters of synthesis, Edward O. Wilson, explains here no less than the origin of human society.—Richard Rhodes, winner of the Pulitzer Prize

Endlessly fascinating, Edward O. Wilson - in the tradition of Darwin - plumbs the depths of human evolution in a most readable fashion without sacrificing scholarly rigor.—Michael Ruse, author of A Meaning of Life --This text refers to the paperback edition.

Edward O. Wilson is the author of more than thirty books, including Anthill, Letters to a Young Scientist, and The Conquest of Nature. The winner of two Pulitzer Prizes, Wilson is a professor emeritus at Harvard University and lives with his wife in Lexington, Massachusetts. --This text refers to the paperback edition.

Regarded as one of the world’s preeminent biologists and naturalists, Edward O. Wilson grew up in south Alabama and the Florida Panhandle, where he spent his boyhood exploring the region’s forests and swamps, collecting snakes, butterflies, and ants—the latter to become his lifelong specialty. The author of more than twenty books, including the Pulitzer Prize-winning "The Ants" and "The Naturalist" as well as his first novel "Anthill," Wilson, a professor at Harvard, makes his home in Lexington, Massachusetts.

4.5 out of 5 stars
4.5 out of 5
134 global ratings
How are ratings calculated?
To calculate the overall star rating and percentage breakdown by star, we don’t use a simple average. Instead, our system considers things like how recent a review is and if the reviewer bought the item on Amazon. It also analyzes reviews to verify trustworthiness.
Top reviews

Robert L. Fisher
5.0 out of 5 stars This approximately 100-page book is a stunning summing-up of who we are and how we got here.
Reviewed in Canada on May 9, 2019
Verified Purchase
Genesis presents the origins, the evolutionary stages of life, and the development of eusociality that has been characteristic of our own species, Homo. The sweep of this evolution over hundreds of millions of years is breathtaking and told in a clear, beautiful style. I found I often had to read each sentence a few times to absorb the richness of the information and the connections between environment and adaptations. Wilson's depth of knowledge of biology and understanding of natural selection bestow one epiphany after another on the reader. You will never think of life in the same way again.
Read more
2 people found this helpful
Helpful
Report abuse
See all reviews

Davey
2.0 out of 5 stars A pamphlet about insects
Reviewed in the United Kingdom on March 27, 2021
Verified Purchase
This is a short pamphlet on the author's and others work on the development of eusocial behaviour in insects. Interesting as far as it goes, but we then leap from that to human society, despite the fact that our societies do not show anywhere near the degree of specialisations that insects show! There's nothing that convinces me that humanity is eusocial - we don't even get any discussion of the naked molerat, possibly the only eusocial mammal. And it is desperately short; 153 pages, of which many are blank, or are full page repeats of selected bits of text. Three pages are devoted to attacking Hamilton's Rule, which is presumably a eusocial flying insect in Wilson's bonnet. A less well known author would not get this published in this form.
Read more
Report abuse

I Read, Therefore I Blog
3.0 out of 5 stars Interesting breeze through evolution but doesn't nail its central argument
Reviewed in the United Kingdom on March 31, 2021
Vine Customer Review of Free Product( What's this? )
Edward O. Wilson is Professor Emeritus at Harvard University and one of the world’s pre-eminent biologists and naturalists. This slender book about sociobiology and how human society evolved from and have structures in common with eusocial groups such as termites and wasps did not convince because the comparisons seemed vague. However there were some interesting facts in here about the natural world that kept my attention.

I wasn’t familiar with Edward O. Wilson’s work or reputation before picking up this book so came in without any preconceptions but, having taken some anthropology courses at university, I’ve always been interested in explanations for why human societies have turned out the way they have, I was interested in expanding my knowledge.

With his experience and background, Wilson - as you expect - knows his subject and he writes about it well with a fluid style that is quite academic but not so much as to be alienating. He’s very clearly interested in insect societies because the book focuses much more heavily on them than on mammals and there are lots of interesting facts here about how they’re organised and how the biology of the eusocial groups works to maintain the relevant structures.

However, I have to say that given the book blurb says that this is a book that aims to fully understand human behaviour, I can’t say that it delivers on that. Given the obvious differences between human and, e.g. termite societies, I couldn’t quite grasp how it is that evolution has determined how our society is structured. I did follow the arguments about why we would decide that altruism was a good thing to do in the long term, but I didn’t necessarily understand how that is a genetic or evolutionary concept. To be fair, this could just be because my knowledge of science and biology is rudimentary at best and as such, perhaps I just didn’t get Wilson’s points or see how they tied into evolutionary principles.

Saying that, I did enjoy learning things about the natural world, such as the purpose of starling murmurations or territorial chimpanzee behaviour, and I also found the primer on evolution and how it operates to be useful. I also enjoyed the fact that Wilson is clearly so passionate about his subject and so knowledgeable about it that it comes through in each page. On that basis, although this book didn’t quite work for me I still think it’s worth a look if you have an interest in the subject matter.

Rob Sedgwick
3.0 out of 5 stars Too short
Reviewed in the United Kingdom on February 24, 2019
Vine Customer Review of Free Product( What's this? )
I have never read any other Edward O. Wilson books before so I can't really compare this with his other books. Although it's fair to say it's stretching it to call Genesis a book at all, it's so short. It's been padded as much as it can be with superfluous text, generous line spacing and a few drawings, but even then it's a very short book and I'd feel very short-changed if I was paying the price of a full book for this. It's more like a 99p e-book.

The content, what little there is, is not bad, just a bit brief. The book covers the interesting topics of how altruism arise, safety in numbers and Eusociality. It's not as though there isn't plenty to cover in such a well-studied area of evolutionary biology so I don't understand why the book is so short. It does cover a lot of similar ground to The Selfish Gene and has the advantage of being much more recent, but I still think The Selfish Gene is a far better book than this.

The theme of this book, if there is one, is that humans are eusocial like ants and termites. He might be right but he'd doesn't explore the subject sufficiently to really make his point.

If you can get this as an e-book for under 2 quid I'd consider it, but I wouldn't bother getting the paper version.

Read more
2 people found this helpful
Report abuse
See all reviews
Back to top
Get to Know Us
Make Money with Us
Amazon Payment Products
Let Us Help You
EnglishChoose a language for shopping. CanadaChoose a country/region for shopping.
© 2008-2021, Amazon.com, Inc. or its affiliates