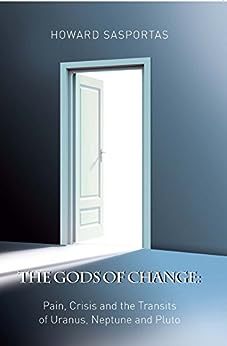 Gods of Change - Pain, Crisis, and the Transits of Uranus, Neptune and Pluto Kindle Edition

by Howard Sasportas (Author) Format: Kindle Edition
See all formats and editions
Sorry, there was a problem loading this page. Try again.
Life isn't always easy. It's impossible to live deeply and not to feel pain or go through times of crisis, breakdown or major disruptive change. Although this is clearly inevitable, what is not always obvious is the crucial role pain and crisis play in the process of growth and evolution. While some people fall apart altogether and never make it through difficult times, many others emerge from conflict and turmoil renewed and transformed, indeed, more fully alive. They 'return' to life with a renewed sense of commitment to a neglected potential, with a renewed sense of what one might call the 'sacred' in life, with a richly enhanced sensitivity to others. This lovely and important work from Howard Sasportas teaches us how to respond to the transits of Uranus,Neptune and Pluto with calmness and a knowledge that the more we work with them, the more worthwhile will be the end result.
Read more
Previous page
Next page

4.5 out of 5 stars
4.5 out of 5
40 global ratings
How are ratings calculated?
To calculate the overall star rating and percentage breakdown by star, we don’t use a simple average. Instead, our system considers things like how recent a review is and if the reviewer bought the item on Amazon. It also analyzes reviews to verify trustworthiness.

Rob I MacDonald
2.0 out of 5 stars Not what I was hoping
Reviewed in Canada 🇨🇦 on December 19, 2017
Verified Purchase
A little too heavy on mythology, and too light on astrology
Read more
Helpful
Report abuse

Tim Burness
5.0 out of 5 stars Great accessible psychological guide to major transits
Reviewed in Canada 🇨🇦 on March 20, 2002
The late Howard Sasportas packed a huge amount of high quality astrological and psychological information into this intelligent, clear and accessible book. It has been one of my constant companions over the last 10 years or so, both in my work as a professional astrologer and in following my own transits of Uranus, Neptune and Pluto.
The first section, "The Collaboration with the Inevitable", is an excellent summary of how astrology can be used as a tool for understanding ongoing personal transformation, helping to turn perceived crises into opportunities. Sasportas then moves on to look in great detail and depth at the transits of Uranus, Neptune and Pluto to each planet in the natal chart. A very large number of case histories are dotted throughout the transit interpretations, with a wide range of examples of how each planetary combination can show up in daily life. These possible events are considered in the context of the psychological development of the individual, Sasportas drawing on his extensive knowledge of many fields of psychology, mythology and spirituality.
Much of the astrological material here is similar to other classic transit books such as those by Robert Hand, Betty Lundsted or Stephen Arroyo (who Sasportas acknowledges), but Sasportas has masterfully integrated a huge number of additional psychological and spiritual insights from many sources. The Gods Of Change is a wise and compassionate conribution to modern astrology.
Read more
6 people found this helpful
Helpful
Report abuse

L. Sutherland-Fraser
5.0 out of 5 stars One of our brilliant humanstic astrologers
Reviewed in Canada 🇨🇦 on February 26, 2002
I think we were robbed when Howard passed some years ago, he was a brilliant, self aware and humble astrologer who had a message and got it out to those who loved his work. He is sadly missed. This is the best book on transits out there in my opinion as it takes in the whole not just the day to day things that many transit books take into account. The inner workings of transits from the outer planets. I love this book.
Read more
5 people found this helpful
Helpful
Report abuse

Carol Ann
5.0 out of 5 stars outstanding
Reviewed in Canada 🇨🇦 on August 17, 2000
I have read almost every book published on outer planet transits, and this is by far the most thorough book there is on possible outcomes manifested in our lives when we experience the energy of these planets affecting our personal planets. Not only does he cover aspects, he discusses the planets transiting through the 12 houses and major and minor areas of emphasis in our daily lives. I am just beginning to do professional readings and this is the one book I would not want to be without when interpreting outer planet transits. BUY IT NOW!
Read more
2 people found this helpful
Helpful
Report abuse

Goofer Offer
5.0 out of 5 stars Brilliant
Reviewed in Canada 🇨🇦 on January 21, 2004
The BEST book on the transits of the outer planets - by far. Indispensable for any astrologer - beginner to expert.
Read more
4 people found this helpful
Helpful
Report abuse
See all reviews

joan hogan
5.0 out of 5 stars Lize Green books are always fabulous to read very detailed and interesting
Reviewed in the United Kingdom 🇬🇧 on May 5, 2020
Verified Purchase
I will never complain about her books she is so knowlegeable and i have been educated by her in so many ways.
Read more
Report abuse

Francesca75
5.0 out of 5 stars Engaging and Enlightening
Reviewed in the United States 🇺🇸 on March 17, 2017
Verified Purchase
I'm a psychotherapist and astrologer for more than 3 decades and to my mind, this book is exceptional, probably the most worthwhile astrology book I've ever read. He's a remarkably insightful and interesting author and does a superb job articulating what one can expect under the very significant outer planet transits.

Transits are easy to understand and so is Sasportas' writing, but he also goes very deep. This is that rare astrology book that can be understood by and be interesting and valuable to even non-astrologers, not because it's simplistic -- it's not! -- but because he has such a clear grasp of the material that his writing communicates clearly and engagingly. Most astrology books are either too technical and dry or too light and lacking in substance. This book is a rare exception, definitely worth the investment as the transits he discusses can be quite challenging. His insights are both reassuring and give clear direction how to work with the energy of transits to take full advantage of the positive changes they promise.
Read more
10 people found this helpful
Report abuse

DeepRiverWoman
5.0 out of 5 stars The One Astrology Book Everyone Should Own!
Reviewed in the United States 🇺🇸 on September 21, 2013
Verified Purchase
The author of this book is both knowledgeable and most accurate in his summation of the outer planets and pain. He states that under an adverse transit of Neptune, for example, you have to be careful because even under a doctor's supervision, you can still end up experiencing significant health issues. Neptune, currently in Pisces, conjunct my Sun, found me in this very predicament recently. The doctor diagnosed me with a kidney infection; said he was going to prescribe Cypro, an antibiotic to treat kidney infections. Instead, as he was busily chatting with a visitor in his lobby, he wrote the script for the antibiotic, Azithromycin, which is for respiratory infections. He even informed me that it was a good thing I got in to see him that day or I would have landed in the hospital. Well, because the antibiotic he wrote was the wrong one, I became gravely ill and wound up in the hospital the very next day for three days, and my kidneys had almost shut down. So, you see, this isn't just another astrology book; it is one of the astrology books that you should definitely have in your library. I cannot recommend it highly enough!
Read more
8 people found this helpful
Report abuse

Natalia V. Johnsen
5.0 out of 5 stars Loving it
Reviewed in the United States 🇺🇸 on February 17, 2022
Verified Purchase
Loving this book! Great explanations! For the sake of future astrologers, hope they will never stop maki it.
Very insightful. Finally proper explanation of my Pluto square Pluto situation that hits home and helps to understand what to do.
Read more
Report abuse
See all reviews
Report an issue
Does this item contain inappropriate content?
Report
Do you believe that this item violates a copyright?
Report
Does this item contain quality or formatting issues?
Report