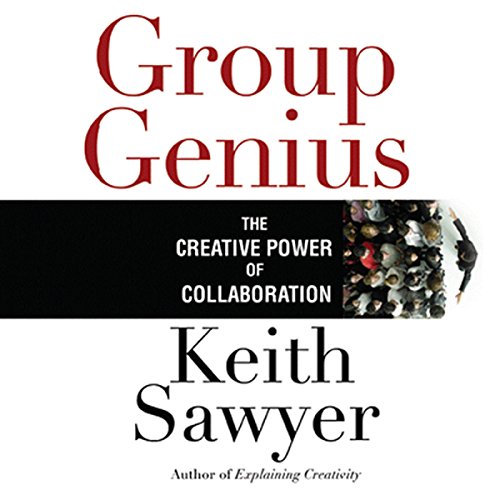 Keith Sawyer (Author), Jonathan Marosz (Narrator), Gildan Media, LLC (Publisher) & 0 more
4.5 out of 5 stars 62 ratings
See all formats and editions
Sorry, there was a problem loading this page. Try again.
Creativity has long been thought to be an individual gift, best pursued alone; schools, organizations, and whole industries are built on this idea. But what if the most common beliefs about how creativity works are wrong?

In this authoritative and fascinating new audiobook, Keith Sawyer, a psychologist at Washington University, tears down some of the most popular myths about creativity and erects new principles in their place. He reveals that creativity is always collaborative - even when you're alone. Sawyer's audiobook is filled with compelling stories about the inventions that changed our world: the ATM, the mountain bike, and open-source operating systems, among others.

In each case, Sawyer tells the true story of innovation. In spite of the "lone genius" myths that always spring up after an invention's success, these important inventions always originate in collaboration.

To understand the hidden collaborations that drive exceptional creativity, Sawyer spent 15 years studying jazz groups and theater ensembles, small businesses, and large corporations. In Group Genius he distills the essence of this acclaimed research and shows us how to be more creative in collaborative group settings, how to change organizational dynamics for the better, and how to tap into our own reserves of creativity. The empowering message is that all of us have the potential to be more creative; we just need to learn the secrets of group genius.

Our best offer yet
Get 3 months free!
Limited time offer. Get started
Learn more about membership
List Price: $28.21
You Save: $3.53 (13%)
By completing your purchase, you agree to Audible's Conditions Of Use and Amazon's Privacy Notice. Tax where applicable.
Sold and delivered by Audible, an Amazon company
Share

4.5 out of 5 stars
4.5 out of 5
62 global ratings
How are ratings calculated?
To calculate the overall star rating and percentage breakdown by star, we don’t use a simple average. Instead, our system considers things like how recent a review is and if the reviewer bought the item on Amazon. It also analyzes reviews to verify trustworthiness.
Top reviews

Kim Wrathall
5.0 out of 5 stars Excellent
Reviewed in Canada on July 27, 2017
Verified Purchase
Such a great insightful read. Learned so much about collaboration but also about historic events that I knew nothing about the back stories for. Would highly recommend.
Read more
One person found this helpful
Helpful
Report abuse

Robert Morris
HALL OF FAME
5.0 out of 5 stars How "ordinary" people - working together -- can achieve extraordinary innovation
Reviewed in Canada on January 19, 2008
I have had a lifelong interest in etymology. Curious to know the origin of "genius," I checked several sources and here is what I learned. The Latin word "genius" originally meant "deity of generation and birth" and as its meaning evolved over time via various languages, it was used to describe "a person of outstanding intellectual ability." We do indeed view those of superior intellect (e.g. Plato and Aristotle, Michelangelo, Leonardo da Vinci, Isaac Newton, and Albert Einstein) as secular equivalents of religious deities and certainly admire their mental capabilities. We also tend to toss the word "genius" around somewhat carelessly when referring to entertainers, athletes, and business executives. That said, the fact remains that throughout human history, what Keith Sawyer characterizes as "collaborative genius" has made significant contributions in ways and to an extent few (if any) individuals have. In fact, the more I think about all this, the more I appreciate the meaning and significance of Bernard of Chartres' observation (incorrectly attributed to Isaac Newton) that "We are like dwarfs standing on the shoulders of giants."

Here is a brief excerpt which correctly indicates one of Keith Sawyer's core concepts: "In both an improv group and a successful work team, the members play off one another, each person's contributions providing the spark for the next. Together, the improvisational team creates a novel emergent product, one that's more responsive to the changing environment and [key point] better than what anyone could have developed alone. Improvisational teams are the building blocks of innovative organizations, and organizations that can successfully build improvisational teams will be more likely to innovate effectively."

Make no mistake about it: although there can be indeed great creative power of collaboration, the process is necessarily messy, frustrating, at times perhaps discouraging. However, on the basis of his extensive research since the 1990s, Sawyer has identified seven key characteristics of effective creative teams: Innovation emerges over time, successful collaborative teams practice "deep listening," team members build on their collaborators' ideas, only over a period of time do the meaning and significance of each idea become clear, meanwhile "surprising" (i.e. unforeseen) ideas emerge, innovation is inefficient (trial and error, frequent false starts and detours, "dry wells," etc.), and innovation emerges "from the bottom up."

Sawyer carefully organizes his material within three Parts: The Collaborative Team (Chapters 1-4), The Collaborative Mind (Chapters 5-7), and The Collaborative Organization (Chapters 8-11). One of Sawyer's most valuable insights, examined with both rigor and eloquence, is that people who are steadfastly convinced that they are not "creative" can nonetheless work effectively together to generate (albeit eventually) profoundly innovative ideas. There are some "ifs," of course. First, senior managers must provide full support (including sufficient resources, especially time) of a collaborative team. Next, they must be patient rather than committing the common mistake of "ripping out a seedling to see how well it's growing." Also, they must understand - really understand - the meaning and especially the implications of the aforementioned seven key characteristics of effective creative teams. Finally, they must recognize that each "failure" (however defined) is a unique learning opportunity for them as well as for team members.

Credit Keith Sawyer with a brilliant achievement, especially at a time when the need for innovative thinking and creative collaboration is greater now than ever before.

Island guy
5.0 out of 5 stars An insightful book
Reviewed in Canada on December 1, 2009
This book provides useful insights for those interested in how to spark more innovation in the workplace. The benefits of collaboration are explained, the myth of the solitary genius is revealed, and useful tips for getting people to think creatively are scattered throughout the book.

I like especially that the author takes the principles in "Finding Flow" by Csíkszentmihályi  Finding Flow: The Psychology Of Engagement With Everyday Life  and presents practical ways to bring them to life.

I now find myself noticing the creative exchanges between me and others, that outshine the creativity I have on my own.
Read more
One person found this helpful
Helpful
Report abuse
See all reviews

Alan
5.0 out of 5 stars blows the myth of the lone individual with the sudden idea
Reviewed in the United Kingdom on April 24, 2013
Verified Purchase
I've been working with creativity and collaboration in organisations for a long time, and this is a well researched and insightful exploration of the topic. It explains what happens and what works, without the simplistic hype you get in so many texts these days. It was recommended to me by several people on a LInkedIn group I belong to and I can see why.
Read more
Report abuse

Charalee Graydon
5.0 out of 5 stars Excellent Work on Collaboration
Reviewed in Spain on July 22, 2015
Verified Purchase
I found the book interesting and useful in describing the principles of collaboration, The author had thoroughly researched his topic and provided useful examples throughout the book. I would recommend this book to companies and individuals working with the concept of collaboration. I will use some of the examples of collaborative initiative that were provided in collaborative work I am involved with.
Read more
Report abuse

B. Stuart
5.0 out of 5 stars Results
Reviewed in the United States on May 31, 2008
Verified Purchase
After reading Keith Sawyer's interesting work for years, I added Group Genius as a required text in an Organization Design MBA class I teach. Students are evening students, middle managers to above. They represent all domains, IT, Finance, Engineering, Law, Accounting, Real Estate/Construction and other sciences as well. Following the addition of Group Genius, students began to turn in truly innovative work, creative and original, beyond anything I've seen in years of teaching. They recognized that this was no ordinary text but one they could apply instantly to their own group and team work. They wrote about using it immediately in the workplace, with extraordinary results. That's what I found too, in the classroom, among working people, extraordinary results.
Read more
11 people found this helpful
Report abuse
See all reviews