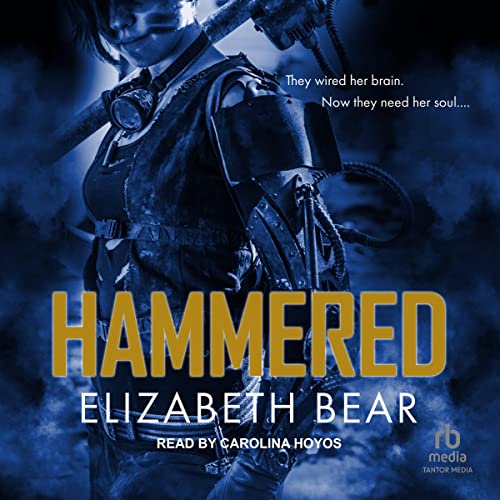 She was engineered for combat—in a world that is running out of time.

Once Jenny Casey was somebody's daughter. Once she was somebody's enemy. Now the former Canadian special forces warrior lives on the hellish streets of Hartford, Connecticut, in the year 2062. Racked with pain, hiding from the government she served, running with a crime lord so she can save a life or two, Jenny is a month shy of fifty, and her artificially reconstructed body has started to unravel. But she is far from forgotten. A government scientist needs the perfect subject for a high-stakes project and has Jenny in his sights.

Suddenly Jenny Casey is a pawn in a furious battle, waged in the corridors of the Internet, on the streets of battered cities, and in the complex wirings of her half-man-made nervous system. And she needs to gain control of the game before a brave new future spins completely out of control.

4.3 out of 5 stars
4.3 out of 5
285 global ratings
How are ratings calculated?
To calculate the overall star rating and percentage breakdown by star, we don’t use a simple average. Instead, our system considers things like how recent a review is and if the reviewer bought the item on Amazon. It also analyzes reviews to verify trustworthiness.

David Brown
5.0 out of 5 stars superb writing
Reviewed in Canada 🇨🇦 on October 22, 2022
Verified Purchase
I’ve read others of Ms Bear’s books. I recommend anything she writes without reservation. Her characters are believable and her stories are engaging. She can make elaborate plots easy to follow. Her plots ARE often elaborate and as often quite intriguing.
Read more
Helpful
Report abuse
See all reviews

sjhigbee
5.0 out of 5 stars Intelligent, gripping near-future adventure...
Reviewed in the United Kingdom 🇬🇧 on November 14, 2020
Verified Purchase
There is so much to love about this book, starting with the heroine. I love the fact that we jumped into her life after she’d already endured a lifechanging series of events that had left her physically and emotionally compromised. I love that she turns fifty in the middle of the novel – how cool to have a major middle-aged female protagonist in a science fiction cyberpunk thriller!

This near-future dystopian view of Earth has climate change having redistributed the political power dynamic and you won’t be surprised to learn that government departments are every bit as ruthlessly determined to get hold of the latest tech to give their struggling countries some advantage. Jenny is a casualty of a previous entanglement and has been living with the consequences, ever since. Facing premature death from a systemic failure in her cybernetic implants, she is determined to end it herself before she is left a drooling dementia patient. But that is before people from her old life crash back into her current existence. Bear’s writing style grabs my head and heart and won’t let go until the end. I’m aware that there are places where the pacing could be tighter, but I didn’t care. I am pulled into this world of shifting loyalties, where old fury and hurt is hauled into the light and re-examined in the light of new priorities.

For me, the triumph of Bear’s writing is that in a sub-genre exploring the interface between Man and machine, it’s the humanity of her characters that leaps off the page, in all their complexity and differing needs. It’s one heck of a trick to pull off and while this isn’t a flawless book, it is a glorious read. Highly recommended for fans of intelligently written near-future sci fi adventures.
9/10
Read more
3 people found this helpful
Report abuse

The Ex Hippy
3.0 out of 5 stars Mediocre
Reviewed in the United Kingdom 🇬🇧 on November 15, 2021
Verified Purchase
I was looking for a new author and Jenny Casey came up as a possible match. I know this is her first book and it's not bad, it's just not very interesting. It's well written: The characters are believable and act accordingly, there's no Deus Ex rubbish, sudden turnabouts or grinding of gears as the story randomly changes pace. It's just that you don't get involved with the characters enough to really empathise with or care about them, the story lacks a hook to drag you in. Ultimately it ends and I personally found that I wasn't that bothered either way.

Maybe her stuff gets better as she goes along, she has quite the back catalogue so someone obviously loves it. I may give another of her later books a go, but I won't be getting the next one in this series.
Read more
Report abuse

Bertolt
2.0 out of 5 stars What a terrific set of images and ideas
Reviewed in the United Kingdom 🇬🇧 on February 12, 2016
Verified Purchase
A cyborg ex-soldier woman living as a recluse in the slums of Toronto. A gang leader with surgically enhanced steel shark teeth hunting the people who killed his kids. The electronic ghost of Richard Feynman haunting the internet, battling the military-industrial complex. A conspiracy to test out new military pharmaceuticals by tainting street drugs. What a terrific set of images and ideas! What a great set-up for a book!

Except the author, having come up with those ideas, isn’t actually interested in them. This is a book focused on emotions, and emotions of an especially overheated sort. And they kind of just hang in space, not rooted in action or event. All the other characters think the cyborg heroine is utterly wonderful, but you are never told why. She develops this super-intense relationship with her saviour/boyfriend but it is just there, never explained or filled-out. And what is so terrible about her ex-boss, the evil thing that causes her to so loathe him? It’s all like this. The situation isn’t helped by the fact that while this book is notionally character-driven, there is actually very little characterisation: I finished it with no real sense of any of them, really. Add the fact that the writing is relentlessly but unnecessarily oblique (at times you have to focus hard to establish simple plot points, like WHERE THEY ARE) and you have a book that fails to tick the very boxes it draws up – especially since the interesting bits, the conspiracy, the revenge story, are casually finished off, tucked into a corner like inconveniences.

I suspect a lot of this is due to gender. This sets out to be more a bodice-ripper than a thriller. From that point of view, the overheated emotion doesn’t have to be plausible or explained, it is the POINT, the thing the author wants to get TO, and so is its own justification. It doesn’t help that the story, so slow to develop, ends before it has really started (rather, it just stops, inviting you to buy the next book). I genuinely do not know where I am supposed to find the pleasure in this novel. If you are into this emotionally-based stuff, it is probably great. If not, then you, like me, might find it a bit bewildering.
Read more
4 people found this helpful
Report abuse

Anne
4.0 out of 5 stars Full of ideas with an excellent heroine
Reviewed in the United Kingdom 🇬🇧 on October 6, 2016
Verified Purchase
The author has chosen for her heroine a fifty year old woman who has had major surgery in the past but who now lives in permanent pain and who lives a life haunted by things which happened when she was in the military and after she was injured. Jenny isn't the obvious heroine as she lives a life in secrecy among the remnants of civilisation in the latter part of this century but she is a woman who grabs you immediately as you watch her desperate not to become reinvolved with people from her past but unable to resist the temptation to have her implants upgraded - but Jenny's adaptations to her implants and the way in which her body has adjusted are unique and that makes her valuable to others. The author has not just created a great main character in the embittered and secretive Jenny but she has also created a disturbing crumbling world where most of America has been wiped out and life in what remains of the urban landscape is tough.

I enjoyed reading this book and I thought that it was full of excellent ideas but it is the first in a series and not everything is explained in this volume. That meant that there were times that I didn't understand what was going on because the author had not yet given me the information I needed. I usually find this way of writing unhelpful and often boycott the rest of the series in a type of protest but I did find that there was enough here to keep me engaged and to make me want more.
Read more
2 people found this helpful
Report abuse

Alan
3.0 out of 5 stars Great set-up but it just stops
Reviewed in the United Kingdom 🇬🇧 on May 21, 2022
Verified Purchase
I enjoyed the world building in this novel and the character development of Casey but the book just stops. I know it’s part of a trilogy but, even so, you expect some of the plot lines developed within the book to be brought to a conclusion and I’m afraid they weren’t.
Read more
Report abuse
See all reviews