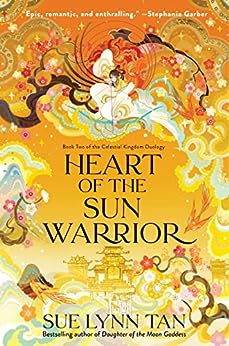 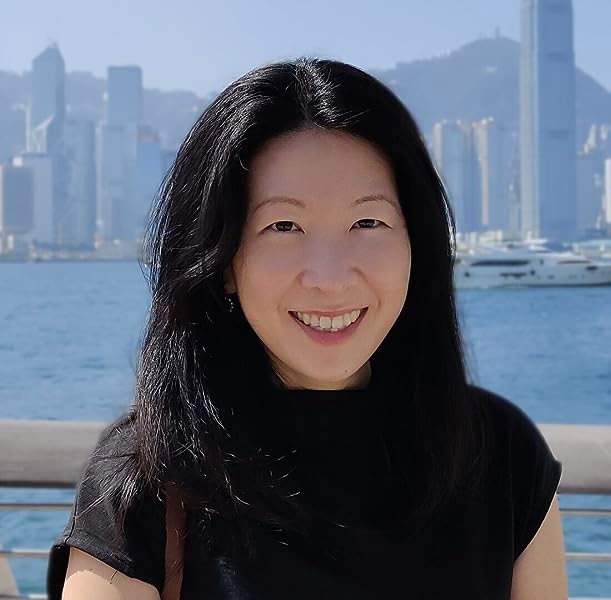 The stunning sequel to Daughter of the Moon Goddess delves deeper into beloved Chinese mythology, concluding the epic story of Xingyin—the daughter of Chang’e and the mortal archer, Houyi—as she battles a grave new threat to the realm, in this powerful tale of love, sacrifice, and hope.

After winning her mother’s freedom from the Celestial Emperor, Xingyin thrives in the enchanting tranquility of her home. But her fragile peace is threatened by the discovery of a strange magic on the moon and the unsettling changes in the Celestial Kingdom as the emperor tightens his grip on power. While Xingyin is determined to keep clear of the rising danger, the discovery of a shocking truth spurs her into a perilous confrontation.

Forced to flee her home once more, Xingyin and her companions venture to unexplored lands of the Immortal Realm, encountering legendary creatures and shrewd monarchs, beloved friends and bitter adversaries. With alliances shifting quicker than the tides, Xingyin has to overcome past grudges and enmities to forge a new path forward, seeking aid where she never imagined she would. As an unspeakable terror sweeps across the realm, Xingyin must uncover the truth of her heart and claw her way through devastation—to rise against this evil before it destroys everything she holds dear, and the worlds she has grown to love . . . even if doing so demands the greatest price of all.

"Tan’s remarkable debut and duology launch transports readers into a stunning world...The result is a riveting page-turner that will leave fantasy lovers satisfied and eager for more" — Publishers Weekly (starred review) on Daughter of the Moon Goddess

“An exquisitely detailed fantasy with a strong, vulnerable protagonist. The intimate prose makes Tan’s wonderful debut an immersive experience; share with fans of Shelley Parker-Chan and Katherine Arden.” — Library Journal (starred review), Debut of the Month, on Daughter of the Moon Goddess

“Filled with intricate world building, heartbreaking romance and mind-bending intrigue. Tan’s story is mythic in its scope yet personal in its execution . . . The result is an all-consuming work of literary fantasy that is breathtaking both for its beauty and its suspense.” — BookPage (starred review) on Daughter of the Moon Goddess

“This vivid, unputdownable debut effortlessly whisks us into the celestial realms of Chinese high fantasy. Tan magnificently conjures the romantic yet dangerous dazzle of this immortal world, but never loses track of the shining human heart of her tale. A captivating treat for lovers of Chinese fantasy dramas and newcomers alike.”
— Shelley Parker-Chan, #1 international bestselling author of She Who Became the Sun, on Daughter of the Moon Goddess

“Sue Lynn Tan has written a breathtaking debut novel that will sweep readers away to the moon and back. I can’t remember the last time a book surprised and delighted me as much as this one. Epic, romantic, and enthralling from start to finish. I love this book.” — Stephanie Garber, #1 NYT bestselling author of the Caraval series, on Daughter of the Moon Goddess

"A lush, dreamy gem of a novel." — Shannon Chakraborty, bestselling author of The City of Brass

"A sparkling debut, epic but intimate, about love and sacrifice and hope in the face of despair. At its center is a protagonist who is flawed but full of heart—I dare you not to be entranced by this magical book."  — Ava Reid, author of The Wolf and the Woodsman

“With all the beauty and heartbreak of a Chinese fantasy drama, Daughter of the Moon Goddess is an enchanting joy from start to finish.”
— Tasha Suri, author of The Jasmine Throne

"A gripping adventure inspired by the legend of Chang'e, Daughter of the Moon Goddess explores how far one woman will go for the sake of family, loyalty, and love. Prepare to be swept off your feet by this absolutely magical tale."
— Genevieve Gornichec, author of The Witch's Heart

“Strikingly evocative, tense, and heartfelt, Daughter of the Moon Goddess is a difficult book to put down. It floats you into the Celestial Kingdom, introduces you to monsters both literal and figurative, and leaves you dreaming of dragons.”
— Andrea Stewart, author of The Bone Shard Daughter

"An absolutely delightful and enchanting read! Daughter of the Moon Goddess takes a beloved Chinese legend and reimagines it into a gorgeously-spun romantic fantasy. I can't wait for the sequel!" — Elizabeth Lim, New York Times bestselling author of Spin the Dawn and So This is Love

Sue Lynn Tan writes fantasy inspired by the myths and legends she fell in love with as a child. Born in Malaysia, she studied in London and France before settling in Hong Kong with her family. Her love for stories began with a gift from her father, a compilation of fairy tales from around the world, and she spent much of her childhood lost in magical realms. When not writing or reading, she enjoys exploring the hills, lakes, and temples around her home.

Sue Lynn Tan writes stories inspired by the myths and legends she fell in love with as a child. After devouring every fable she could find in the library, she discovered fantasy books, spending much of her childhood lost in magical worlds.

​Daughter of the Moon Goddess is her debut, the first in the Celestial Kingdom duology – a fantasy of immortals, magic and love, inspired by the beloved legend of the Chinese moon goddess, Chang'e. Its sequel, Heart of the Sun Warrior, is also out now.

When not writing or reading, she enjoys exploring the hills, lakes, and temples around her home. She is also grateful to be within reach of bubble tea and spicy food, that she unfortunately cannot cook.

4.6 out of 5 stars
4.6 out of 5
115 global ratings
How are ratings calculated?
To calculate the overall star rating and percentage breakdown by star, we don’t use a simple average. Instead, our system considers things like how recent a review is and if the reviewer bought the item on Amazon. It also analyzes reviews to verify trustworthiness.

Fairyness
5.0 out of 5 stars Did not want this to end!
Reviewed in the United Kingdom 🇬🇧 on November 13, 2022
Verified Purchase
Wow , what can I say? This second installment did not disappoint at all. I read it in one sitting , I couldn't put it down. I re read the moon godess yesterday ( 12/11/22 ) just to refresh myself as read a while ago. With out giving anything away I would love to know what happens after the end. Maybe just a small novella? The twists and turns kept me gripped all the way through. Power struggles , faults on all sides , love and loss. Again beautiful detail and world building. Thank you so much for a totally spell binding story.
Read more
Report abuse

Savannah
5.0 out of 5 stars FAVORITE FANTASY SERIES
Reviewed in the United States 🇺🇸 on November 19, 2022
Verified Purchase
How do I find the words to convey the beauty and magnificence of this series? This series completely touched my heart and fully surprised me. I haven't read anything like it before! The pacing is fast and tense, the characters have incredible growth throughout, and the writing is perfection in every way.

Heart of the Sun Warrior did not disappoint. It is a worthy sequel to Daughter of the Moon Goddess, taking the story to new heights. There are greater consequences and plot twists that create lots of tension. The love triangle is so expertly explored in this book as well; I didn't know which way I was leaning for most of the book. But I think my favorite part was the character growth. Each character had their own things to learn: forgiveness, strength, respect, bravery, overcoming grief, unconditional love. I marked so many passages of life lessons to learn from this book.

Without a doubt, this is my favorite fantasy series and one I will return to again. PLEASE read this series! Especially if you love Chinese folklore, dragons, hidden identity, well-done love triangles, enchantments, strong family bonds, monster battles, and exquisite writing.

Thank you, Harper Voyager and NetGalley, for the ARC.

Kindle Customer
5.0 out of 5 stars A great sequel
Reviewed in the United States 🇺🇸 on November 17, 2022
Verified Purchase
*4.5 stars*

This was such a great sequel. I gobbled everything up. The minor squabbles I had are related to the love triangle and XingYin's wishy-washyness about it all. Nevertheless, I so enjoyed this story. The action doesn't let up with so many surprises along the way (1 particular heartbreaking one).
I'm so ready for what the author writes next
Read more
Report abuse

jedi
5.0 out of 5 stars A beautifully told story
Reviewed in the United States 🇺🇸 on November 25, 2022
Verified Purchase
I finished The Heart of the Sun Warrior and have so many thoughts. The story is beautifully written and does a fantastic job building the story arch of each character from the first novel. There were twists, turns, laughter, joy and tears. It's one of those books that once you start reading, you just can't put down. Even after finishing the novel, I walked away feeling charged and raw with emotion (in a good way). It's one book I plan to re-read just to appreciate the nuances and emotional layers. A highly recommended read.
Read more
Report abuse

Taylor
5.0 out of 5 stars A beautifully woven story
Reviewed in the United States 🇺🇸 on November 18, 2022
Verified Purchase
I absolutely loved the first book, so I purchased this immediately upon release! The author is so good at weaving a story. A lot of times I can predict the outcome of books and and movies but this book just kept me hanging on (and reading all night lol). I can't wait to see more from this author!!!
Read more
Report abuse
See all reviews
Report an issue
Does this item contain inappropriate content?
Report
Do you believe that this item violates a copyright?
Report
Does this item contain quality or formatting issues?
Report