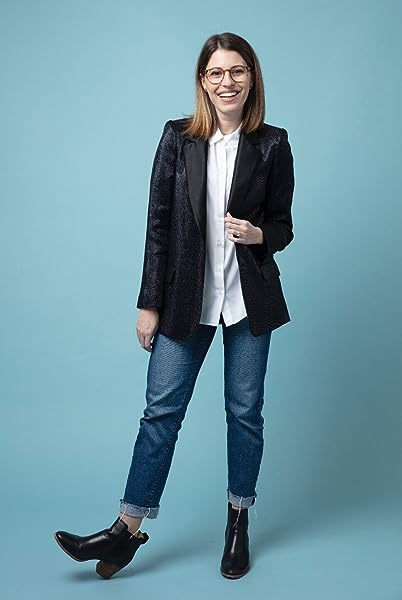 Hello, Fears: Crush Your Comfort Zone and Become Who You re Meant to Be Audio CD

by Michelle Poler (Author)
4.8 out of 5 stars 1,429 ratings
See all formats and editions
Sorry, there was a problem loading this page. Try again.
Previous page
Next page

She is the Founder of Hello Fears, a social movement empowering millions to step outside the comfort zone and tap into their full potential.

Michelle’s life took a spiraling twist in 2015 when she decided to get out of her way and embark on a journey facing 100 fears in 100 days while sharing it with the world - a project that quickly became a viral phenomenon.

Since then, Michelle has taken the stage to inspire people around the world to step out of their comfort zone, and become the best version of themselves. She has been invited to speak at TEDx, Google, Facebook, LinkedIn, Netflix, Microsoft, P&amp;G, Toyota, Coca-Cola, and many more, as well as schools, colleges and youth leadership organizations.

Known for her vibrant personality and Latin roots, Michelle gets audiences movin' (and groovin') while inspiring them to take action into living a courageous life. Her work has been featured on CBS, CNN, Huffington Post, Buzzfeed, NBC and Daily Mail among many others.

Michelle is originally from Caracas, Venezuela and she holds a Masters in Branding from the School of Visual Arts in New York City. Early on in her career she worked as an Art Director at Young &amp; Rubicam for brands such as Hershey’s, Wendy’s, AT&amp;T and Revlon.

Michelle and her husband (and full-time business partner), Adam, travel over 120 times per year. As they do, they record a Spanish-language podcast, Desde El Avión (From the Plane), sharing what it takes to build a business together and balance married life in the process.

You can follow Michelle on Instagram (@hellofears) as she bestows her impact across the world, choosing courage over fear, and making everyone around her a little braver.

4.8 out of 5 stars
4.8 out of 5
1,429 global ratings
How are ratings calculated?
To calculate the overall star rating and percentage breakdown by star, we don’t use a simple average. Instead, our system considers things like how recent a review is and if the reviewer bought the item on Amazon. It also analyzes reviews to verify trustworthiness.

Laura R.
5.0 out of 5 stars Life changing and relatable!
Reviewed in Canada 🇨🇦 on January 4, 2021
Verified Purchase
I might not be able to put the impact that this book is having in my life so all I can say is that Michelle did a great job with it and the best thing is that now I feel an understanding and empathy I never felt before. I feel part of something bigger cause I know there are other people out there with similar struggles and although it might not be easy to apply what's in the book, it can be become that extra push to make you grow and go outside your comfort zone. Definitely not the type of book you read when you go to bed as you have to do some writing and exercises. I'd recommend reading it when you are in a comfortable place and can dedicate time to work on the activities.
Read more
Helpful
Report abuse

SSRP
5.0 out of 5 stars Real!! Very very real!
Reviewed in Canada 🇨🇦 on July 30, 2020
Verified Purchase
Wow! What a great book.. Chapters 6 and 7, my favorites so far (haven't finish yet). I loved how every chapted is explained from her own experience, she is so relatable.. I also loved that there are exercises for you to take a moment and think from within.. it transforms your life, if you are ready for it.. Thank you
Read more
Helpful
Report abuse

Karina Florencio
5.0 out of 5 stars Best book ever!
Reviewed in Canada 🇨🇦 on February 24, 2021
Verified Purchase
Helped me navigate my fears and understand that I can do everything I want to do, even if I feel fear. Life changing
Read more
Helpful
Report abuse

Sonia Molero
5.0 out of 5 stars Awesome book for tween and teens!
Reviewed in Canada 🇨🇦 on July 31, 2021
Dear Michelle : My daughter is past version of you: born in Caracas, kind soul, curious, perfectionist, resourceful, nerd, book worm, powerful, anxious, full of fears & full of dreams, super brave and lovely! We got her your book for her 12-yr old birthday present last week on July 25th, and she DEVOURED the book in 2 DAYS! Reading it all along in our summer outings to the lake, in the car, kids were splashing water and she was found in the grass reading your book.
Yesterday, when I made a mistake driving and took a wrong detour, she was coaching me all the way through: “mom, what’s the best that can happen when the worst happen? We get to know new places!” It was awesome seeing her coaching me and coaching herself. She’s only TWELVE!
Thank you Michelle empowering girls as young as my daughter.
Read more
Helpful
Report abuse

pats
5.0 out of 5 stars Loved it
Reviewed in Canada 🇨🇦 on May 5, 2020
I received an official copy from the publisher and I am in love of this book. The graphics, the way is written it catches you immediately. Michelle is giving me so much valuable information and experience through her journey that is incredible.
Read more
One person found this helpful
Helpful
Report abuse

Grousetrap
3.0 out of 5 stars Some good points, but nothing amazing
Reviewed in Canada 🇨🇦 on October 24, 2020
Many of the components of this book are very... Juvenile and commonplace advice. Although there are some components that are helpful, overall I believe there are much better books on this topic that provide novel insights that were lacking in this book.
Read more
2 people found this helpful
Helpful
Report abuse
See all reviews

Adriana Leguizamon
5.0 out of 5 stars A book for anyone.
Reviewed in the United Kingdom 🇬🇧 on December 20, 2020
Verified Purchase
I bought this book after listening to a podcast were the author discuss part of the content of the book. I thought this would be a good book for my son but when arrives I decided to read it and it definitely make me think about my personal decisions and things that I would like to change or do.
I plan to read the book with each of my sons as the content open the doors to discuss some deep thoughts about how to make decisions and learn to live intentionally.
Read more
Report abuse

Laura,Derry N.Ireland
5.0 out of 5 stars I LOVED this book
Reviewed in the United Kingdom 🇬🇧 on October 4, 2020
Verified Purchase
OMG This Book 😭
This Is amazing book, such a easy read and so colourful, at the end of each chapter, there is key takeaways, beautifully laid out..
It's one of this books that u can read and pick up anytime..

If you are struggling to get over fears, of showing people the real you and who you really are...
And you really want to get out of your comfort zone..
Then is book is for YOU!!
I also feel like I know Michelle as it's so personal
It's one of the best self help books I've ever read!!
Thank You Michelle 😘
Read more
Report abuse

Francy Sanchez
5.0 out of 5 stars Must read! - And become who you are meant to be
Reviewed in the United Kingdom 🇬🇧 on June 27, 2020
Verified Purchase
This book has become one of my favorite books ever. To read this book was like having a conversation with Michell at my house haha.
It just gave all the motivation that I needed to keep working on my dreams but more than that she empowers us to become a doer.
This book will be on my nightstand to read anytime that I need motivation.
Thank you Michell.
Read more
One person found this helpful
Report abuse

MM
5.0 out of 5 stars Great book
Reviewed in the United Kingdom 🇬🇧 on December 12, 2020
Verified Purchase
Love this book, the author has a very authentic voice and is totally relatable, making it an enjoyable read with actionable steps. Highly recommended
Read more
Report abuse

Paul Smith
5.0 out of 5 stars Thought provoking, do what you want, rather than conform
Reviewed in the United Kingdom 🇬🇧 on October 3, 2021
Verified Purchase
Your growth and expectations are unique, only you know what makes you happy. An honest account, put across in a simple understanding way. Makes you reflect and and think about your values, then be honest with yourself
Read more
Report abuse
See all reviews