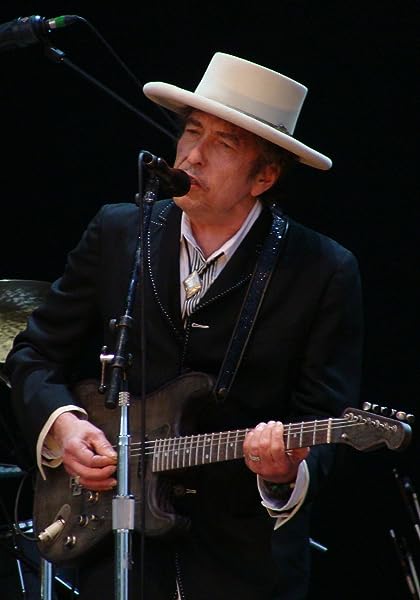 by Bob Dylan (Author), David Walker (Illustrator)
4.8 out of 5 stars 176 ratings
See all formats and editions
Sorry, there was a problem loading this page. Try again.

WINNER OF THE NOBEL PRIZE IN LITERATURE

Iconic singer-songwriter Bob Dylan and illustrator David Walker team up to present this charming, cozy, and touching interpretation of “If Not for You.”

In this inventive interpretation of Bob Dylan’s 1970 song “If Not for You,” illustrator David Walker beautifully imagines Dylan’s lyrics as portraying the bottomless love between a parent and a child—and the magical experiences they might share together.
Read more
Previous page
Next page

"A floppy-eared dog and his pup treasure each other’s company in anthropomorphic domestic scenes that every child will recognize.... The palette and technique of the acrylic illustrations are soft and rounded using broken lines and delicate highlights. They provide a warm and fuzzy feeling that adds to the theme of love between a parent and child. The lyrics to Dylan’s 1970 song “If Not for You” are the text. VERDICT: Walker has done a fantastic job of interpreting Dylan’s song for children." ― School Library Journal, March 2016

"Walker illustrates the 1970 Dylan tune with an adorable parent-child canine pair. Using minimal backgrounds and props to keep the focus on the relationship, Walker masterfully conveys emotions in his acrylic illustrations...the pictures are so poignant that parents could make up their own words." ― Kirkus Reviews, March 2016

Bob Dylan has released thirty-eight studio albums, which collectively have sold over 120 million copies around the world. He won the Nobel Prize in Literature and has been awarded the French Legion of Honor, a Pulitzer Prize Special Citation, and the Presidential Medal of Freedom, the country’s highest civilian honor. His memoir, Chronicles: Volume One, spent a year on the New York Times bestseller list.

David Walker has been drawing and painting all his life. A freelance artist for almost twenty years, his work can be found on a wide array of products including greeting cards, fabrics, and of course, children’s books. David lives and works in his studio in Chapel Hill, North Carolina, happily surrounded by paper, paints, and a big lazy spotted dog. Please visit David at DavidWalkerStudios.com.

Start reading If Not For You on your Kindle in under a minute.

Bob Dylan (born Robert Allen Zimmerman, May 24, 1941) is an American singer-songwriter, artist and writer. He has been influential in popular music and culture for more than five decades. Much of his most celebrated work dates from the 1960s when his songs chronicled social unrest, although Dylan repudiated suggestions from journalists that he was a spokesman for his generation. Nevertheless, early songs such as "Blowin' in the Wind" and "The Times They Are a-Changin'" became anthems for the American civil rights and anti-war movements. After he left his initial base in the American folk music revival, his six-minute single "Like a Rolling Stone" altered the range of popular music in 1965. His mid-1960s recordings, backed by rock musicians, reached the top end of the United States music charts while also attracting denunciation and criticism from others in the folk movement.

Dylan's lyrics have incorporated various political, social, philosophical, and literary influences. They defied existing pop music conventions and appealed to the burgeoning counterculture. Initially inspired by the performances of Little Richard, and the songwriting of Woody Guthrie, Robert Johnson, and Hank Williams, Dylan has amplified and personalized musical genres. His recording career, spanning 50 years, has explored the traditions in American song—from folk, blues, and country to gospel, rock and roll, and rockabilly to English, Scottish, and Irish folk music, embracing even jazz and the Great American Songbook. Dylan performs with guitar, keyboards, and harmonica. Backed by a changing line-up of musicians, he has toured steadily since the late 1980s on what has been dubbed the Never Ending Tour. His accomplishments as a recording artist and performer have been central to his career, but songwriting is considered his greatest contribution.

Since 1994, Dylan has published six books of drawings and paintings, and his work has been exhibited in major art galleries. As a musician, Dylan has sold more than 100 million records, making him one of the best-selling artists of all time. He has also received numerous awards including eleven Grammy Awards, a Golden Globe Award, and an Academy Award. Dylan has been inducted into the Rock and Roll Hall of Fame, Minnesota Music Hall of Fame, Nashville Songwriters Hall of Fame, and Songwriters Hall of Fame. The Pulitzer Prize jury in 2008 awarded him a special citation for "his profound impact on popular music and American culture, marked by lyrical compositions of extraordinary poetic power." In May 2012, Dylan received the Presidential Medal of Freedom from President Barack Obama.

4.8 out of 5 stars
4.8 out of 5
176 global ratings
How are ratings calculated?
To calculate the overall star rating and percentage breakdown by star, we don’t use a simple average. Instead, our system considers things like how recent a review is and if the reviewer bought the item on Amazon. It also analyzes reviews to verify trustworthiness.
Top reviews

Amazon Customer
5.0 out of 5 stars A love poem like no other!
Reviewed in Canada on May 9, 2017
Verified Purchase
I absolutely love the sentiment of Bob Dylan's poetry. I have given this book as a love poem to my 2 grown sons and my grandson.
It speaks in a way that a card never could.

Tracy Stade
2.0 out of 5 stars Two Stars
Reviewed in Canada on July 18, 2017
Verified Purchase
Doesn't flow well as a book. Not worth the price.
Read more
Helpful
Report abuse

Christina Findlay
5.0 out of 5 stars Great book but this should come in a board book option.
Reviewed in Canada on January 31, 2021
Verified Purchase
This is a great book, especially if you love Bob Dylan and want to introduce your child to music or lyrical-style books. It reads quick and the art is very heartwarming. But because of the simplistic message and quick read, a board book option would be preferred as then you can read it to young toddlers without worrying they will rip the pages.
Read more
2 people found this helpful
Helpful
Report abuse
See all reviews

MH
5.0 out of 5 stars Brought a tear to daddy's eye!
Reviewed in the United Kingdom on July 10, 2016
Verified Purchase
Lovely words and cute pictures. I have been buying these Bob Dylan books for my husband (who is a Bob fan) since having children and they make perfect presents from them. This one brought a tear to his eye - not that he'd admit it! The kids love it too.
Read more
3 people found this helpful
Report abuse

Grumpy pensioner 🤔
5.0 out of 5 stars A new Dylan world.
Reviewed in the United Kingdom on October 27, 2016
Verified Purchase
Brought a serious smile to my face and looking forward to introducing my 3-y-o granddaughter to Bob Dylan.
Read more
One person found this helpful
Report abuse

Gordon
5.0 out of 5 stars Great kids book
Reviewed in the United Kingdom on August 28, 2019
Verified Purchase
Great kids book
Read more
Report abuse
See all reviews
Back to top
Get to Know Us
Make Money with Us
Amazon Payment Products
Let Us Help You
EnglishChoose a language for shopping. CanadaChoose a country/region for shopping.
© 2008-2021, Amazon.com, Inc. or its affiliates