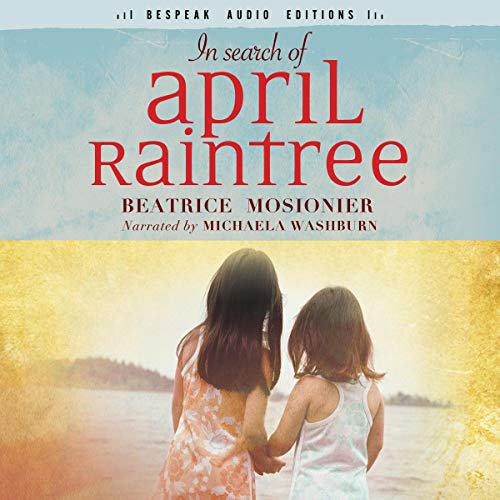 In Search of April Raintree

Two young sisters are taken from their home and family. Powerless to change their fortunes, they are separated, and each put into different foster homes. Yet over the years, the bond between them grows. As they each make their way in a society that is, at times, indifferent, hostile, and violent, one embraces her Métis identity, while the other tries to leave it behind. In the end, out of tragedy, comes an unexpected legacy of triumph and reclamation.

Bespeak Audio Editions brings Canadian voices to the world with audiobook editions of some of the country’s greatest works of literature, performed by Canadian actors.

Read more
©1983, 1999, 2008 Beatrice Mosionier (P)2019 Bespeak Audio Editions
Previous page
Next page
Learn more about membership
List Price: $19.29
You Save: $2.41 (12%)
By completing your purchase, you agree to Audible's Conditions Of Use and Amazon's Privacy Notice. Tax where applicable.
Sold and delivered by Audible, an Amazon company

4.9 out of 5 stars
4.9 out of 5
8 global ratings
How are ratings calculated?
To calculate the overall star rating and percentage breakdown by star, we don’t use a simple average. Instead, our system considers things like how recent a review is and if the reviewer bought the item on Amazon. It also analyzes reviews to verify trustworthiness.
Top reviews

Kat.D
5.0 out of 5 stars It’s very sad but a very good read.
Reviewed in Canada on May 18, 2019
Verified Purchase
This is one of my favourite books because it’s a true story, a lot of our people have gone theft this so ya very sad. 😓 thank u for putting ur story out there and I am very sorry for what u went through. Hugs 😘
Read more
Helpful
Report abuse

Fenna
5.0 out of 5 stars A Canadian novel that should be required reading.
Reviewed in Canada on February 5, 2004
This story was written and set in my hometown of Winnipeg. I'm writing a review not because I feel the need to examine or analyse, but rather because this book had a major impact on me when I was around 13 and I think its incredible that it has not gained greater recognition/appreciation.
To summarize in brief, this book is a told through the eyes of April, a young Metis girl whose parents are caring but neglectful alcoholics. The story follows April and her sister, Cheryl, as they are taken from their parents and enter the foster care system. Passed from white family to white family, their lives are comfortable at best, hell at the worst; never are they truly at home, rarely do they see their parents. Their experiences differ because they are split up almost immediately. Their difference in experience lead them down divided paths - one of them extremely tragic.
As a teenage white girl, this book shocked and horrified me. Out of all the books I read during that time period, I think this one drew the most empathy and the most lasting reaction. I can still recall the nightmarish rape scene from this book and cringe at the memory. Culleton is an amazing writer. She draws you into the story and the hearts of the characters. Its impossible to put the book down and simply forget about what you've read. I believe Culleton based the book on her own experiences, but I'm not certain. What I do know for a fact is that this book is realistic. I live in this city, I grew up in the neigbourhood written about, and friends of mine work for CFS (Child & Family Services). This book is not an exaggeration and knowing that for a fact when you read it makes for even more of an impact.
The story is dramatic and touching. I reread it a number of times - first the "censored" version and then In Search of April Raintree (uncensored) after my school librarian told me about it. I'm almost tempted to say its not a book for kids, but then I don't think it did me any harm. It woke me up a bit, definitely. I remember sobbing in an armchair after finishing it.
The characters stay with you. Like all well-written books, this one is literally mood-altering. The writing is so well done that you become the main character and feel almost a physical pain over what she endures and suffers. If anything, this book should be read to encourage simple empathy. At best, it could be hoped that it would provide greater understanding and insight into the experiences of many children and over the well... no other word but 'plight' is coming to mind right now, so the 'plight' of many Native/Metis Canadian people.
(I'm sleepy as I write this but I'm hoping my recommendation will hold up. Also, I just checked online and found this: "Although only loosely based on Culleton's own childhood experiences as a foster child, the book is dedicated to her two sisters, who, like Cheryl Raintree, commited suicide as adults.")
~illyria
Read more
11 people found this helpful
Helpful
Report abuse
See all reviews

Bentley
4.0 out of 5 stars Good walk down memory lane
Reviewed in the United States on October 13, 2013
Verified Purchase
Well written. I grew up in Winnipeg and could relate a lot to this story. Would be a good high school teaching aid.
Read more
Report abuse
See all reviews