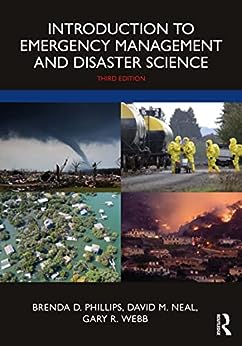 A definitive resource, the Introduction to Emergency Management and Disaster Science presents the essentials to better understand and manage disasters. The third edition of this popular text has been revised and updated to provide a substantively enriched and evidence-based guide for students and emerging professionals. The new emphasis on disaster science places it at the forefront of a rapidly evolving field. This third edition offers important updates, including:

The Introduction to Emergency Management and Disaster Science is a must-have textbook for graduate and undergraduate students and is also an excellent source of information for researchers and professionals.

Brenda Phillips, Ph.D., is Dean of the College of Liberal Arts and Sciences and Professor of Sociology at Indiana University South Bend. She is the author of Mennonite Disaster Service, Qualitative Disaster Research, Disaster Recovery, Disaster Volunteers, a co-author on Business Continuity Planning, and an editor on Social Vulnerability to Disasters. Professor Phillips has conducted research on disaster recovery since 1982, beginning as a student of E.L. Quarantelli at The Ohio State University’s Disaster Research Center. Her published research can be found in a variety of journals including the International Journal of Mass Emergencies and Disasters, Disaster Prevention, Disasters, Humanity and Society, the Journal of Emergency Management, Natural Hazards Review, and Environmental Hazards. She has been funded multiple times by the National Science Foundation to study disasters and vulnerable populations. Dr. Phillips has been invited to teach, consult, or lecture in New Zealand, Australia, Germany, India, Costa Rica, Mexico, Canada, Peru, and the People’s Republic of China. Her volunteer activities have included serving on Local Emergency Planning Committees, county-level safety committees, and multi-county health care coalitions for disaster preparedness, as well as serving as a subject matter expert for the U.S. Federal Emergency Management Agency, the National Council on Disability, and the Office of the Federal Coordinator of Meteorology. She holds considerable expertise in business continuity planning and has helped complete over sixty academic continuity plans. In 2012, she received the Blanchard Award for Excellence in Emergency Management Education. In 2013, she was inducted into the International Network of Women in Emergency Management and Homeland Security’s Hall of Fame.

David M. Neal, Ph.D., recently retired as Professor Emeritus in Fire and Emergency Management from Oklahoma State University and is now a Visiting Scholar and Affiliated Scholar with Indiana University South Bend, and an Affiliated Researcher with the Risk and Crisis Research Centre at MidSweden, University. He has conducted disaster research since 1978 and taught his first disaster class in 1979. He has also received funding for his research from the National Science Foundation, Department of Homeland Security, Federal Emergency Management Agency, National Aeronautics and Space Administration, the American National Red Cross, and the Alabama Consortium on Higher Education among others. His academic publications can be found in such journals as International Journal of Mass Emergencies and Disasters, Natural Hazards, Journal of Emergency Management, Disaster Prevention and Management, International Journal of Risk Reduction, Sociological Focus, and Sociologiska Forsking among others. He has given a number of invited international invited presentations in England, Canada, Russia, Germany, Costa Rica, India, and Sweden. He has taught in emergency and disaster management degree programs since 1989 (University of North Texas, Jacksonville State University, Oklahoma State University). As a faculty member or consultant, he helped establish or enhance a number of early degree programs related to emergency management or fire administration, including on-line degree programs. In 2015, he received the Blanchard Award for Excellence in Emergency Management Education.

Gary R. Webb, Ph.D., is Professor and Chair of Emergency Management and Disaster Science at the University of North Texas, Denton, Texas. Previously, he was a faculty member in the sociology department at Oklahoma State University, where he received the Regents Distinguished Teaching Award. His research has been supported by various agencies, including the U.S. National Science Foundation, and it has appeared in a variety of professional journals, including the International Journal of Mass Emergencies and Disasters, International Journal of Emergency Management, Journal of Contingencies and Crisis Management, Natural Hazards Review, and the International Journal of Disaster Risk Science. His research has also been featured in national media outlets, including the New York Times, Los Angeles Times, and National Public Radio. He has delivered invited presentations on hazards, disasters, and emergency management in Denmark, France, South Korea, Taiwan, The Netherlands, and Turkey. In 2021, Dr. Webb received the Blanchard Award for Excellence in Emergency Management Education.