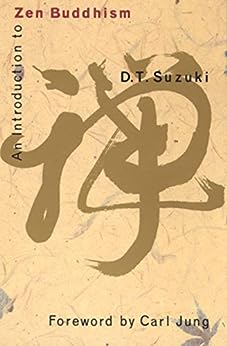 Enjoy a great reading experience when you buy the Kindle edition of this book. Learn more about Great on Kindle, available in select categories.
The highly influential book that helped bring Eastern spiritual principles to the Western world.

One of the world’s leading authorities on Zen Buddhism, and a Nobel Peace Prize nominee, D. T. Suzuki was the author of more than a hundred works on the subject in both Japanese and English, and was most instrumental in bringing the teachings of Zen Buddhism to the attention of the Western world.

Written in a lively, accessible, and straightforward manner, An Introduction to Zen Buddhism is illuminating for the serious student and layperson alike. Suzuki provides a complete vision of Zen, which emphasizes self-understanding and enlightenment through many systems of philosophy, psychology, and ethics. With a foreword by the renowned psychiatrist Dr. Carl Jung, this volume has been acknowledged a classic introduction to the subject. It provides, along with Suzuki’s Essays in Zen Buddhism and Manual of Zen Buddhism, a framework for living a balanced and fulfilled existence through Zen.
Read more
Previous page
Next page

"D.T. Suzuki's works on Zen Buddhism are among the best contributions to the knowledge of living Buddhism that recent decades have produced . . . We cannot be sufficiently grateful to the author."--Carl Jung, in his foreword to the book

D.T. Suzuki s works on Zen Buddhism are among the best contributions to the knowledge of living Buddhism that recent decades have produced . . . We cannot be sufficiently grateful to the author. Carl Jung, in his foreword to the book" --This text refers to an alternate kindle_edition edition.

Daisetz Teitaro Suzuki was Japan's foremost authority on Zen Buddhism, and the author of over 100 works on the subject. He was trained as a Buddhist disciple in the great Zen monastery at Kamakura. From 1897 to 1908 he worked in the United States as an editor and translator, and later became a lecturer at Tokyo Imperial University. In 1950, at 80, he returned to the United States and spent most of the decade teaching, lecturing, and writing, particularly at Columbia and Harvard. Returning to Japan, he died in Tokyo in 1966 at the age of 95.
Christopher Reed has been teaching Buddhism and Buddhist meditation for 15 years. He received transmission as a Dharma teacher from Zen master Thich Nhat Hanh. He has been influenced by the tradition of socially/politically engaged Buddhism, and works toward the integration of traditional Buddhist teaching with the demands of everyday life. He is co-founder and director of the Ordinary Dharma Meditation Center in Los Angeles and the Manzanita Village Retreat Center in San Diego.
--This text refers to an alternate kindle_edition edition.

4.4 out of 5 stars
4.4 out of 5
376 global ratings
How are ratings calculated?
To calculate the overall star rating and percentage breakdown by star, we don’t use a simple average. Instead, our system considers things like how recent a review is and if the reviewer bought the item on Amazon. It also analyzes reviews to verify trustworthiness.

Strum
5.0 out of 5 stars An Introduction to Zen Buddhism by Daisetz Teitaro Suzuki
Reviewed in Canada 🇨🇦 on June 12, 2018
Verified Purchase
It's a joy to read this deservedly famous writer's introduction to ZEN.
Read more
Helpful
Report abuse

Erika Borsos
5.0 out of 5 stars A Drink of Water for a Thirsty Man in the Desert
Reviewed in Canada 🇨🇦 on February 3, 2004
Amazingly my volume of this book was published in 1964 and looking at the preface, the book was created from articles written in Japan in 1914 ... The author states if he can lead the reader to study more of his work he has achieved his goal. This volume will serve to quench the thirst and hunger of any reader who is interested in Zen and it will lead one to try to understand more of the concepts associated with this experience.
The introduction is written by Dr. Carl Gustav Jung, who tells us, that the oriental concepts of Tao, satori, and the Buddhist concept of kamma are so different from Western ideas that it is difficult to translate. Yet he gives his highest recommendations to this volume -- no small matter, from one such as he is... a world famous psychiatrist and psychologist. The Zen texts say "enlightenment" is a natural occurence, and that it is a state of insight into the nature of self. Jung tells us it is a state of "spiritual reality", that 'satori' is a psychic occurence. It is a state of 'seeing things differently', a state of "consciousness of the consciousness" ... It is associated with "becoming whole" ... a spiritual experience that is part of consciousness ... but more expansive. Jung considers it is duty to tell Westerners -- it is "the longest of roads" -- "difficulties strew the path" -- "trodden by only a few of our great men" -- it remains for most -- "a beacon on a high mountain, shining out in a haze future". [p.27]
D.T. Suzuki in his "Preliminary" describes the two paths of Buddhism, the Lesser Vehicle and Higher Vehicle. "Personal experience is everything in Zen." [p.33]"No amount of meditation will keep Zen in one place." [p.41] He provides chapters on "nihilistic zen", "illogical zen", and "zen a higher affirmation". Practical zen, koans, and acquiring '"satori" or a new viewpoint' are well documented with fine examples. For a book of *only* 132 pages the breadth, width and depth of detail is astonishing. The author proves to be a master of his subject, indeed, no one else can whet the appetite of a beginner and have them searching to know more. This is the best gift a writer can provide -- this author provides us his *very* *best*. Erika Borsos (erikab93)
Read more
2 people found this helpful
Helpful
Report abuse

rareoopdvds
5.0 out of 5 stars A Beginning for Zen Students
Reviewed in Canada 🇨🇦 on May 29, 2002
The one criticism that Zen practitioners offer in the world of Zen in the Western culture is that it has been intellectualized into absurdity. That is to say, in the Taoist tradition, by understanding Zen is not to understand it. Modern Zen in the West has taken on a psychological approach where one thinks in order to "get it", one must break it down in terms of how the mind responds while in practice. When one does not "get it" then it is written off as silly, irrational or impratical. From the writings of D. T. Suzuki, this irrationality is the root from which the practice begins. To put the student into a state of paradox because, "simply the human tongue is not an adequate organ for expressing the deepest truths". When there is no verbal expression, or thought connected with words in which to speak, then a paradox is set up. A crux that forfits the tongue and makes room for action. Suzuki who is known as the introducer of Zen as well as the foremost authority on the subject in the West writes clearly and accurately, which is impressive knowing that English is not his native language. Throughout the book Suzuki sites many examples of ancient literature of Zen Masters, monks and students who have experienced satori or enlightenment through the use of stories, anecdotes and parables. These "stories" are told as if they are historical, yet are designed to further the student into irrationality. In Western terms, it means to break the yes/no logic of the rational mind. While the book reads easily, Suzuki writes intellectually. Although it is intellectual, there is not a sense he is talking down to the reader or intellectualizing the subject. To epitomize the paradox, Suzuki is describing what is not Zen more so than what is Zen by the sheer fact that Zen is not a thing to grasp or see. By his descriptions, the only way it can be exposed most accurately is through the description of what is not Zen. The reader, after trying to pick sides of what Zen may in fact be will struggle with this. Is this Zen? Or is this not Zen? Upon giving up on the struggle, the last section of the book is reprinted in-part, Suzuki's book, 'The Training of the Zen Monk' and may come to some conclusion that Zen is not a thing or idea or philosophy, but a life to live by. Decribing the techniques and practices of various Zen disciplines, Suzuki emphasizes the strict lifestyle and loyalty to their work. I feel the word "work" best describes this lifestyle. I do not mean a job by any sense of the word, by work as in "doing with conscious intent". But because I dont practice Zen, I can intellectualize a little bit, which is why I practice yoga.
Read more
Helpful
Report abuse
See all reviews

Secret Squirrel
1.0 out of 5 stars More like a pamphlet than a book... 56 pages... Very poor quality binding... Avoid!
Reviewed in the United Kingdom 🇬🇧 on August 20, 2017
Verified Purchase
Very low quality reprint of a few magazine articles. Only 56 pages in total. Horrible pixelated scanned cover. I recommend you to look for the full version by Suzuki instead. Returned immediately. However, return/refund was free/immediate, so thanks Amazon - I'm still a happy customer :-).
Read more

1.0 out of 5 stars More like a pamphlet than a book... 56 pages... Very poor quality binding... Avoid!
Reviewed in the United Kingdom 🇬🇧 on August 20, 2017
Very low quality reprint of a few magazine articles. Only 56 pages in total. Horrible pixelated scanned cover. I recommend you to look for the full version by Suzuki instead. Returned immediately. However, return/refund was free/immediate, so thanks Amazon - I'm still a happy customer :-).
Images in this review

J
3.0 out of 5 stars Good book
Reviewed in the United Kingdom 🇬🇧 on April 14, 2019
Verified Purchase
It is exactly what it says it is and I was not disappointed.
Read more
One person found this helpful
Report abuse