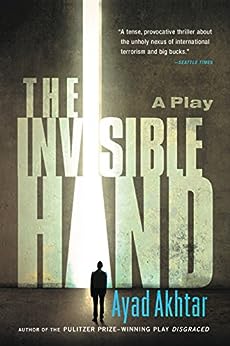 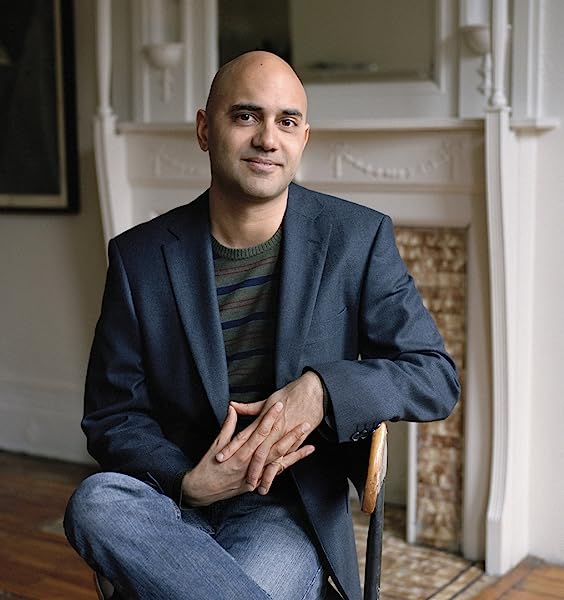 by Ayad Akhtar (Author) Format: Kindle Edition
See all formats and editions
Sorry, there was a problem loading this page. Try again.
A "tense, provocative" play (Seattle Times) from the author of Homeland Elegies and the Pulitzer Prize winner Disgraced -- a chilling examination of how far we will go to survive and the consequences of the choices we make.

In remote Pakistan, Nick Bright awaits his fate. A successful financial trader, Nick is kidnapped by an Islamic militant group, but with no one negotiating his release, he agrees to an unusual plan. He will earn his own ransom by helping his captors manipulate and master the world commodities and currency markets.

Praise for The Invisible Hand

"With The Invisible Hand, Ayad Akhtar solidifies the reputation he forged with Disgraced as a first-rate writer of fierce, well-crafted dramas that employ topicality but are not limited by it.... The prime theme is pulsing and alive: when human lives become just one more commodity to be traded, blood eventually flows in the streets."--Brendan Lemon, Financial Times

"Raises probing questions about the roots of the Islamic terrorism that has rattled the world for the last decade and more."--Charles Isherwood, New York Times

"Confirms the Pakistani-American playwright as one of the theater's most original, exciting new voices.... In this tight, plot-driven thriller, Ahktar again turns hypersensitive subjects into thought-provoking and thoughtful drama. But here he also brings a grasp of money-big money-not to mention the market's unsettling connections to international politics."--Linda Winer, Newsday

"Politically provocative.... A scary (and dreadfully funny) treatise on the universality of human greed."--Marilyn Stasio, Variety

"[A] tragically contemporary thriller.... There has been precious little activity on this front since Jerry Sterner's Other People's Money and Caryl Churchill's Serious Money.... Mr. Akhtar makes up for this oversight with a vengeance."--Harry Haun, New York Observer

"[A] tense, provocative thriller about the unholy nexus of international terrorism and big bucks.... Akhtar...expertly decodes that vivid expression, 'blood money.'.... The Invisible Hand jolts along like a well-made caper flick.... But the taut plot is also a great setup for a fierce psychological match, and a useful colloquy on the American dollar as a force for good and evil.... [A] very telling, compelling play."--Misha Berson, Seattle Times

"Whip-smart and twisty.... Akhtar offers a hostage tale that balances violence, humor and geopolitical critique, never losing its edge or letting us complacently root for one side."--David Cote, Time Out New York

Ayad Akhtar is a screenwriter, playwright, actor, and novelist. He is the author of a novel, American Dervish, and was nominated for a 2006 Independent Spirit Award for best screenplay for the film The War Within. His plays include Disgraced, produced at New York's Lincoln Center Theater in 2012 and on Broadway in 2014 and recipient of the 2013 Pulitzer Prize for Drama, and The Who & The What, produced at Lincoln Center Theater in 2014. He lives in New York City. --This text refers to an out of print or unavailable edition of this title.

4.4 out of 5 stars
4.4 out of 5
19 global ratings
How are ratings calculated?
To calculate the overall star rating and percentage breakdown by star, we don’t use a simple average. Instead, our system considers things like how recent a review is and if the reviewer bought the item on Amazon. It also analyzes reviews to verify trustworthiness.
Top reviews

Julia
5.0 out of 5 stars Once you start, you cannot stop.
Reviewed in Canada on February 17, 2018
A beautifully crafted play. A great beginning and then the tension kept building. Once you begin, you cannot stop.
Since reading it, we keep talking about it.
How money corrupts.
How greed seeps into lives.
How all consuming it can get.
How far a person will go to survive.
How much can anyone take.
Read more
Helpful
Report abuse
See all reviews

Harley
5.0 out of 5 stars The hand may be invisible, but this writer's heart and mind are on unforgettable display.
Reviewed in the United Kingdom on October 20, 2017
Verified Purchase
Brilliant - wonderful - surprising - and the same adjectives could be used to describe his play "Disgraced". Everyone could be enlightened by Ahtar's balanced observations of Muslims in today's world.
Read more
One person found this helpful
Report abuse

Alan L. Chase
5.0 out of 5 stars Another success for Pulitzer Prize winner Ayad Akhtar
Reviewed in the United States on March 17, 2016
Verified Purchase
I have systematically set out to read everything that Ayad Akhtar has written, and to see all of his played performed on stage. This play continues his exploration of the relation of America to Islam. In this work, he combines his personal knowledge of Islam, having grown up as a Muslim Pakistani-American and his understanding of finance. This narrative follows the relationship between big money and international terrorism, seen through the eyes of some memorable characters embroiled in a tense hostage situation in Pakistan. As always, Akhtar's writing is laser-focused and eye-opening. The arc of this story shines a light onto the question: "Why do the terrorists hate us?"
Read more
2 people found this helpful
Report abuse

Vinny
5.0 out of 5 stars Stunning Contemporary Drama Script
Reviewed in the United States on August 28, 2016
Verified Purchase
This is the script of an amazingly dramatic play that we were lucky to see. It is still new to the USA. It is about a young investment manager for Citi Bank who is kidnapped in Pakistan. They want a large ransom so they can overthrow their corrupt government. The American teaches his captors how to make fast money The play moves along so fast, I am glad I was able to get this script so quickly from Amazon so I wouldn't miss any lines in the performance. We will remember this play and its amazing second act for a long time.
Read more
Report abuse

Brian M.
5.0 out of 5 stars Another winner
Reviewed in the United States on May 15, 2021
Verified Purchase
Having read Akhtar's Pulitzer-Prize-winning "Disgraced", I was eager to read another play of his. This is another winner. He has a knack for writing such dramatically compelling scenes. I can't wait to read his novel (which I ordered as soon as I finished reading this play).
Read more
Report abuse
See all reviews
Report an issue
Does this item contain inappropriate content?
Report
Do you believe that this item violates a copyright?
Report
Does this item contain quality or formatting issues?
Report