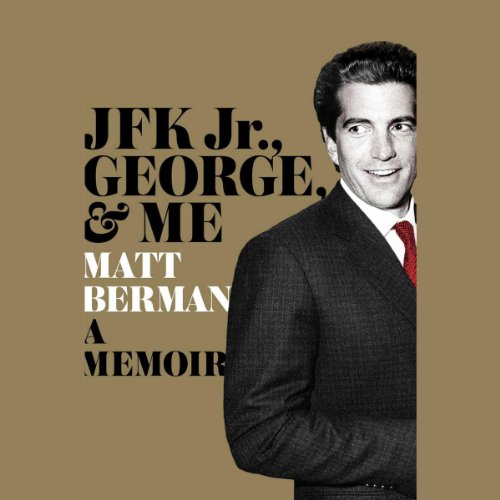 As John Kennedy Jr.'s creative director for George magazine, Matt Berman had a wonderfully collaborative and fun-loving relationship with America's favorite son - his story is told here with unprecedented candor and wit.

The Kennedys - their poise, the family secrets, and their grace in the face of unimaginable tragedies - have captured the imagination and interest of the public for more than fifty years. Now colleague and friend of JFK Jr. Matt Berman offers us a unique look at John's life as both a professional and "regular guy."

When talented creative executive Matt Berman took a meeting with John Kennedy Jr. in 1995, he was immediately hired to serve as George's creative director, thus beginning an unforgettable journey, both personal and professional. We follow Matt through his first days at the magazine as he navigated the choppy waters of what would be the most-talked-about magazine launch in history, helmed by a supremely confident and charming John. Wry and instantly likable, Matt shares not only his own personal story of his relationship with John but also valuable life and work lessons that he learned while working alongside him behind the scenes at George. But most importantly, through Matt's recollections, we see a John Kennedy that the public never got to know. Matt paints a vivid portrait of JFK Jr. that only a select few have ever seen, offering a touching and honest tribute to John's legacy.

4.4 out of 5 stars
4.4 out of 5
196 global ratings
How are ratings calculated?
To calculate the overall star rating and percentage breakdown by star, we don’t use a simple average. Instead, our system considers things like how recent a review is and if the reviewer bought the item on Amazon. It also analyzes reviews to verify trustworthiness.

Danuta Zadorecki
5.0 out of 5 stars The book describes JFK Junior as a very generous person loved by the staff of the George magazine.
Reviewed in Canada 🇨🇦 on September 12, 2021
Verified Purchase
I liked how Matt Bernan describes the positive changes meeting and working for John Kennedy brought to his life and what it meant to him loosing his boss/friend.
Read more
Helpful
Report abuse

Amazon Customer
5.0 out of 5 stars Amazing book!!!!!
Reviewed in Canada 🇨🇦 on July 4, 2017
Verified Purchase
Matt Berman wrote this book from his heart and it shows. A wonderful book of memories for all of us to share. Having lost many people in my own life (most were like John & Carolyn -- way too young)!!! I laughed through the book and cried at the end. After reading the book, I felt as if I had known John and grieved at the end for the loss of 3 wonderful, intelligent and charismatic people, gone way before their time. You did a great job Matt
Thank You
Read more
One person found this helpful
Helpful
Report abuse

Chloe B
5.0 out of 5 stars Five Stars
Reviewed in the United Kingdom 🇬🇧 on January 15, 2016
Verified Purchase
Matt give a great account of his time at George and of JFK Jr.
Read more
Report abuse

Amazon Customer
5.0 out of 5 stars Great
Reviewed in the United Kingdom 🇬🇧 on December 26, 2015
Verified Purchase
Very good I will keep to read over again Thank-you
Read more
Report abuse

Bookie
3.0 out of 5 stars Another Kennedy Memoir
Reviewed in the United States 🇺🇸 on June 28, 2017
Verified Purchase
I've just finished 3 Jackie/JFK Jr./Carolyn memoirs and I'm pretty maxed out on the genre because they are all the same. The theme: people who felt like they were nothing before they lucked into rubbing elbows with fame, became "everything" while devoting their lives to a Kennedy, and again felt like nothing upon the Kennedy deaths. I guess it's not fair to lump them all into this review, but I actually liked Berman's the best because it also gave quite a bit of insight into the workings of George (at least the covers) and that was interesting. And Berman seemed to recover on his own accord better than some of the others. It's almost unbelievable how many Kennedy sycophant memoirs exist. It's as if every servant, work colleague and acquaintance has cashed in. So far I haven't seen anything written by anyone who wasn't a jilted lover or a paid employee.
Read more
10 people found this helpful
Report abuse
See all reviews