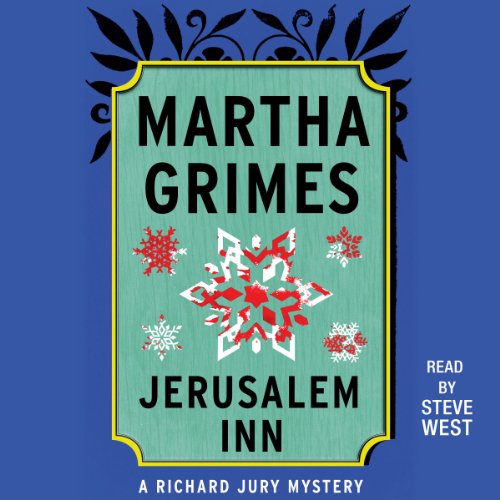 From the rough but colorful pub that provides the novel's title, to the snowboard Gothic estate nearby, the chilly English landscape has never held more atmosphere - or thwarted romance. And Jury will never have a more mysterious Christmas.

Five Days Before Christmas - On his way to a brief holiday (he thinks) Jury meets a woman he could fall in love with. He meets her in a snow covered graveyard - not, he thinks, the best way to begin an attachment.

Four Days Before Christmas - Jury meets Father Rourke, who draws for him the semiotic square - "a structure that might simplify thought," says the priest, but Jury's thoughts need more than symbols.

Three Days Before Christmas - Melrose Plant, Jury's aristocratic and unofficial assistant, arrives at Spinney Abbey, now home to a well-known critic. Among the assembled snowbound guests he meets: Lady Assington, Beatrice Sleight, and the painter Edward Parmenger. When they all assemble in the dining room, Lady Assington announces, "I think we should have a murder."

4.4 out of 5 stars
4.4 out of 5
296 global ratings
How are ratings calculated?
To calculate the overall star rating and percentage breakdown by star, we don’t use a simple average. Instead, our system considers things like how recent a review is and if the reviewer bought the item on Amazon. It also analyzes reviews to verify trustworthiness.

Oldie Goldie
5.0 out of 5 stars Great to be able to order these old but never out of style mysteries.
Reviewed in Canada 🇨🇦 on September 17, 2019
Verified Purchase
I love Marsha Grimes and now have the complete collection of Richard Jury books.
Read more
Helpful
Report abuse

Lemire
4.0 out of 5 stars Four Stars
Reviewed in Canada 🇨🇦 on May 16, 2015
Verified Purchase
One of the series of featuring Richard Jury.
Read more
Helpful
Report abuse

Sheryl Valentine
4.0 out of 5 stars sherylval@aol.com
Reviewed in Canada 🇨🇦 on June 15, 2000
This was my first Martha Grimes book and I really enjoyed it. In the past I have not been a big fan of the British style mystery - yet this book had a lot of witty and clever dialoge. I thought the characters were well developed, which stimulated me to want to read her series from the beginning. If you like mysteries and are looking for something new, try Martha Grimes.
Read more
Helpful
Report abuse

PlantBirdWoman
3.0 out of 5 stars Jerusalem Inn by Martha Grimes: A review
Reviewed in the United States 🇺🇸 on September 18, 2014
Verified Purchase
Superintendent Richard Jury of Scotland Yard seems to constantly be meeting beautiful women to whom he is instantly attracted, but the attraction never goes anywhere. The women never stick. That's true again in Jerusalem Inn, but at least this time the beautiful woman has a good reason for not pursuing a relationship. She's dead.

Jury meets the lovely Helen Minton in a snow-covered graveyard in the Newcastle village of Washington at Christmastime. He has taken days off to spend Christmas with his cousin's family in Newcastle-upon-Tyne, and, delaying the inevitability of their company on a afternoon, is taking a walk in the graveyard when he comes upon Helen. She seems unwell and he walks her back to her home and makes a date to have dinner with her. But, on the appointed day, when he goes to collect her at the Old Hall museum where she works, he finds the local police already there. Helen Minton has been discovered dead.

She had a heart condition and at first it appears that her death may have been due to natural causes, but a postmortem confirms that she was poisoned.

Jury sets off through the snowbound countryside to find her only known relative, a cousin who is in a nearby village. Meanwhile, his aristocratic frequent sidekick, Melrose Plant, is already headed for that same village, along with Aunt Agatha and Vivian Rivington, one of Jury's previous "beautiful women who didn't stick." Melrose, Agatha, and Vivian are going to a Christmas house party at a famous critic's house, along with a number of writers and artists.

Tensions are apparent from the beginning among the various house partiers, but who would ever guess that those tensions would end in murder? Well, only someone reading a Martha Grimes cozy mystery perhaps.

Soon, a thoroughly disliked member of the party is found dead in the snow, having been shot, and Jury and the local constabulary, as well as Melrose Plant, seek the murderer. But was this murder somehow related to the murder of Helen Minton and why does the critic's wife seem to be fading fast? Another case of poisoning perhaps?

Well, we can be sure, of course, that Superintendent Jury will make all the necessary connections and that murder will out and justice be served. In a manner of speaking anyway.

This series is a fun and light read, not at all taxing for a hot summer day. All problems are solved and inconvenient facts are swept under the rug by the ending.

And the handsome Richard Jury who is always very attractive to the women and young girls in his cases still hasn't found a woman who'll stick.
Read more
3 people found this helpful
Report abuse

S. Raygor
2.0 out of 5 stars Snookered!
Reviewed in the United States 🇺🇸 on December 30, 2019
Verified Purchase
I have been reading this series in order, alternating with the Jackson Brodie series which I like a lot. I was very disappointed in this book for several reasons. As another reviewer noted, there are just two many characters to keep track of. Also, the amount of focus on the game of snooker was boring to those of us who don't know the game. But the ending, where the killer is revealed was the worst ever! It's as if Grimes just plucked one of the characters out when she needed to end the book. Several people had the same motive and the one she picked was the least realistic killer. Definitely not a satisfying ending.
Read more
Report abuse