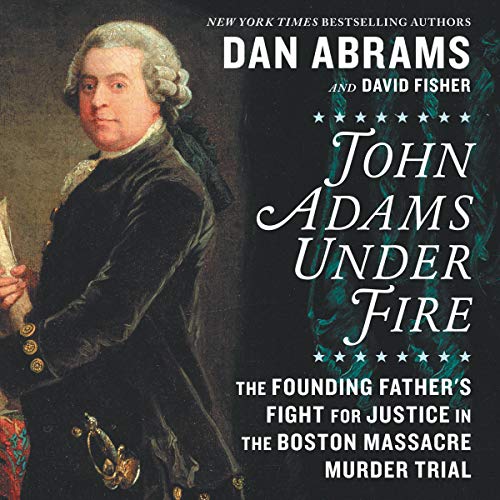 John Adams Under Fire: The Founding Father's Fight for Justice in the Boston Massacre Murder Trial

Honoring the 250th Anniversary of the Boston Massacre

The New York Times best-selling author of Lincoln’s Last Trial and host of LivePD Dan Abrams and David Fisher tell the story of a trial that would change history.

History remembers John Adams as a Founding Father and our country’s second president. But in the tense years before the American Revolution, he was still just a lawyer, fighting for justice in one of the most explosive murder trials of the era.

On the night of March 5, 1770, shots were fired by British soldiers on the streets of Boston, killing five civilians. The Boston Massacre has often been called the first shots of the American Revolution. As John Adams would later remember, “On that night the formation of American independence was born.” Yet when the British soldiers faced trial, the young lawyer Adams was determined that they receive a fair one. He volunteered to represent them, keeping the peace in a powder keg of a colony, and in the process created some of the foundations of what would become United States law.

In this book, New York Times best-selling authors Dan Abrams and David Fisher draw on the trial transcript, using Adams’ own words to transport listeners to colonial Boston, a city roiling with rebellion, where British military forces and American colonists lived side by side, waiting for the spark that would start a war.

4.5 out of 5 stars
4.5 out of 5
738 global ratings
How are ratings calculated?
To calculate the overall star rating and percentage breakdown by star, we don’t use a simple average. Instead, our system considers things like how recent a review is and if the reviewer bought the item on Amazon. It also analyzes reviews to verify trustworthiness.

Ronald H. Clark
4.0 out of 5 stars John Adams wins a big one--the Boston massacre murder trial
Reviewed in the United States 🇺🇸 on April 7, 2020
Verified Purchase
This book is what we used to call "popular history", that is history not written by academics and designed to be read by the general literate public. I never much liked this term--a book is either a solid history or not. This one clearly is a solid history, of much value whether the reader has a strong history background or is just curious about the famous 1770 Boston massacre trial. Given the authors' solid performance in their book on Lincoln, I expected a fine book and I was not disappointed.

The book proceeds chronologically. First there is an introductory discussion of the Boston colony and the massacre. Why were 2,000 British troops there in the first place? Then a couple of chapters are devoted to Adams, his practice and writings, and his involvement in opposing British rule. Nonetheless, the authors probe why he took on the defense of Captain Preston and his seven soldiers in two separate trials even though this might severely damage his practice. Since revenge rather than justice was what Boston seemed to be demanding.

The authors first discuss the trial of Captain Preston. There was no official transcript kept of this trial (or many other trials), so the description is less detailed than the second trial account. One of the interesting things to me was how the lawyers tried to educate the jurors as to legal concepts. Writers on English law such as Blackstone, were relied upon. Having a defense lawyer conducting a trial was a rare event at this time. In fact the Adams defensive team was comprised of three lawyers; in addition there we four judges presiding. What was to come in the second trial was strongly suggested here: much testimony with a lot of conflicts. Adams was able to convince the jury that the prosecution never proved that Preston gave the order for his troops to "fire." He was acquitted.

The second trial is the core of the book. The authors are fortunate because someone had paid a private wordsmith to create some manner of transcript for this trial. This book is somewhat unique in that the author's discuss the testimony given by a very large number of witnesses--not just a summary. There was little physical evidence, so the testimony was the key thing. This can get a bit numbing for the reader since there are many discrepancies in the testimony which the authors identify. Key issues come up again and again: who shot whom, when, did the mob threaten the soldiers sufficiently to justify self defense, did the mob heave a great deal of material at the soldiers before they fired, and was the mob made up of local citizens (a point Adams wisely stayed away from) or was it composed of "rabble" and armed sailors looking for trouble Though making one's way through all this testimony can be daunting, it shows you the challenges Adams faced in defending these troops.

I was surprised in the scholarly arguments Adams made. He read frequently out of leading English legal works and threw quite a lot of complex legal issues at the jurors. But going into these issues in depth, and Adams is quoted extensively, gives the reader a much better grasp of the issues. It was also interesting to see the four judges charge the jurors, in the typical English fashion of the day by discussing substantive issues of fact or hinting at what parts of the evidence they found convincing. Only two soldiers were convicted, not of murder but of manslaughter. These two argued for "benefit of clergy" since they could read, and got off with being branded on their thumbs.Adams therefore prevailed, but as the authors explain, so too did the rule of law at this early point in American history. My only criticism of the book is that it lacks any notes, though a solid bibliography is attached.
Read more
14 people found this helpful
Report abuse

Bill Emblom
2.0 out of 5 stars This Book Wasn't For Me
Reviewed in the United States 🇺🇸 on March 20, 2020
Verified Purchase
As one reviewer stated if you are a young law student then this book would appeal to you. However, I absolutely struggled with it and couldn't finish it because I have too many other books I want to read instead of pretending I know what I'm reading in this one.
The trial parts in particular simply overwhelmed me. I could never have sat on either of these juries. This book found me dozing and I finally gave up on it. I did find out that both the British officer in charge and the British soldiers were both found not guilty.
Simply put, this book overwhelmed me. I'm being generous with two stars based solely on my interest level and not due to any lack of scholarship on the author's part.
Read more
15 people found this helpful
Report abuse

grannygritsinsc
2.0 out of 5 stars Could not finish it
Reviewed in the United States 🇺🇸 on March 14, 2020
Verified Purchase
If you are a young law student, this book may appeal to you. I could not finish it. It was way too tedious.
Read more
20 people found this helpful
Report abuse

Andrew Maile
2.0 out of 5 stars A history book by a lawyer, for lawyers...
Reviewed in the United States 🇺🇸 on April 15, 2020
Verified Purchase
I like and respect the author, but I cannot enthusiastically recommend this book. It is a book written by a lawyer (who is a history buff) for other lawyers who are history buffs. The more casual reader, who happens to be just a plain, old, history buff, will find this a long, LONG, slough.
A reader becomes overwhelmed, and then drowns in minutiae, from the trial testimony. Back and forth, then forth and back....who said this, who threw that, who was standing there, who was looking there, who ran to the left, who screamed 'fire', who shouted from what window, which soldier fired first, where was he aiming his piece....and on and on.
He goes through this effort for BOTH trials....for the commanding officer, and then for the soldiers. A more relaxed/casual reader --who lacks a lawyer's discipline and thirst for such details-- just gets lost.
Interestingly, Abrams spends a good deal of effort in examining J Adams's rigorous style in which he catalogs all the witnesses' testimony and then uses those notes to develop his closing arguments to the jury for both trials. I site this as proof that Abrams's caste of mind (a lawyer's) is his dominate focus.
But any reader does profit from the effort....I did not know there were two separate trials, and that they extended for months after the initial massacre incident, for example. One should read this book only if one has absolutely nothing better to do. Then again, in the time of the virus (April/2020) this book may be just the thing.
Read more
8 people found this helpful
Report abuse

PghSandy
3.0 out of 5 stars Great Book about the Early USA Legal System
Reviewed in the United States 🇺🇸 on May 22, 2022
Verified Purchase
This book is easy to follow, well researched, and well written. For someone like me, who is not intimately acquainted with the legal profession, the book seemed long. The story is good, and most of the trial information is direct transcripts from the trial. The prose seemed a little heavy with details directly quoted from Boston sources from the 1700's (trial transcripts, lawyers' notes, and 1770's newspapers and pamphlets). It didn't feel like a book written about such a romantic time period in the USA's history, but that may have been on purpose because the book is ultimately about the legal system that John Adams practiced in, not John Adams. I did learn a bit about how the legal profession advanced and who Samuel Adams and John Adams were. Definitely an interesting read, but definitely not light reading.
Read more
One person found this helpful
Report abuse
See all reviews